If there's a film to review that if anything I dread , it's Jackie Chan's 1985 film Police Story.

Now it's not because it's a awful film, it's because it's probably one of the most Iconic films of 80's Hong Kong Cinema.

After Jackie had made the Protector with James Glickenhaus as director, in bid to break into the American market ,he returned to Hong Kong thinking that the film would ruin his image in his home region (something he had built up since Drunken Master) , Protector was supposed to be Jackie's Chance to show the West who Jackie Chan was after films like Cannonball Run 1 &2 and Battle Creek Brawl (aka Big Brawl) had failed to set the USA alight with Jackie Chan fandom.

What's more James Glickenhaus had no idea about Jackie's persona and his ability. Trying to portray Jackie as some sort of Chinese Dirty Harry the film was disjointed and also featured foul language and nudity (something Jackie did not feature in his films because of his younger audience ). In fact for the Asian release Jackie gathered the cast from the Protector and returned to Hong Kong to re-shoot certain scenes to edit his own version of the film to release in his home region.

Jackie was annoyed that American directors and producers just didn't see it ,he was determined to film a feature about a Police Man in the Royal Hong Kong Police Force .

He had ideas of what he wanted and gave these ideas to his screenwriter who compiled a script for the film Police Story.

In the film Jackie plays Chan Ka-Kui aka Kevin Chan, though in UK and Australian dubs he is known as Jackie.

The basis for the story is that the Royal Hong Kong Police is preparing a raid on a crime lord by the name of Chu Tao, a drug deal is going down in a shanty town and Chan Ka Kui and his colleagues are in position to trap there foe.

But when early on the police get spotted Chu Tao and his men make a run for it, what ensues is a gun battle around innocents and a chase to stop Chu Tao from escaping prosecution.

When colleagues leave their posts unknowingly to Chan and some other police man ,Chan must try and keep up to stop Chu Tao.

Chu Tao and his men hijack a bus , Chan runs after him grabbing onto the bus with a Umbrella borrowed from a elderly lady.

But after some altercation with Chu's men Chan gets left on the street , he chases after the bus and cuts it off by running down some hilly slopes, he stops the bus by using a citizens car and grabs Chu who bribes him with cash.

Taking Chu back to the station Chan is reprimanded as to why the carefully planned operation had so many loopholes ,but at the same time congratulated for his apprehension of Chu.

Chan is given the role of protecting her as well as stopping Chu or his men having any contact with her.

Chu decides after consultation with his men and lawyer that Salina should disappear and arranges for someone to do so.

Chan is having a tough time convincing Salina do his job effectively, he enlists the help of his friend and colleague Kim to pose as a killer and break into Salina's apartment so he can rescue her.

After a haphazard role play and poor old Kim nearly getting killed ,Salina is a bit more acceptable to Chan protecting her, he says hey should leave and go to his apartment till the hearing.

Once outside they are actually attacked by assassins arranged by Chu. ,after a hectic battle with baseball bats ,the attackers escape and Chan and Salina arrive at his apartment where chan's girlfriend May is waiting with friends to wish him happy birthday .

May gets upset when he turns up Salina ,who's dressed in just her underwear and Chan's coat.

After getting cake on his face May leaves only to be brought back by a friend.

Whilst all this is going on Salina notices Chan's pictures of friends and colleagues on his wall ,she notices that the killer in her apartment seems to be a colleague of Chan's .

Realising this she sets Chan up , and when the next morning arrives Salina is gone and Chan is late for court .

After a terrible court hearing that leaves Chan in the doghouse with his superiors he concentrates on getting Salina .

Chu is out on bail but is haunted by Chan's presence . He arranges for Chan to find out where Salina is so he can have her killed and Chan disgraced.

Chan walks into a trap where Chu's men are waiting and finds out that one of his own colleagues is a mole ,what's more Chan is about to be wanted for the killing of his colleague.

Wanted for murder Chan has no choice but to return to the station ,but when he is met with hostility and the presence of being apprehended he takes his Superintendent hostage to escape the station.

Chan's only hope is to catch Chu in the act , he waits for him to show up at his offices ,it doesn't take long once Salina breaks into his office and steals vital documents which could incriminate Chu.

Filmed in a shopping mall ,this is the films finale and showcases Chan's many skills from fighting and stuntwork. .

So there you go the story is full of entertaining twists ,which show a good range of comedy to fast action and breathtaking stunts not seen in celluloid at this time anywhere else in the world.

Police Story is the film that reinvented Hong Kong action cinema ,it set a new benchmark for others to follow and it also put Jackie Chan up there as the greatest action hero of our days.

People forget what Jackie achieved with the films he shot around this time ,many reviewers look at his later work and say yeah but' it's not as good as this or that film , or it doesn't hold up against this film or that film. Many hard core fans don't like his American films because they are often regarded as Chan just going through the motions, but then we all know of American regulations in filming ,and remember whilst making films like Police Story Chan and his stunt-team had no insurance, no insurance company would insure them.

You can not make a film in the States with out it. But back to the film in question ,people should realise that Jackie was 31 years old when he made the film, it's quite remarkable that any 31 year old could put himself through the many fights and stunts that Jackie performed. .

But that's not anything ,even for Jackie's co stars he demands a lot , and at this time Hong Kong cinema was revered as the hardest cinema in Asia. In the film his long suffering girlfriend goes through some tough scenes as May .

Of course stand out scenes include Jackie's bus stunt where he hangs onto the side of a bus with a umbrella ,they ended up using a metal one after a wooden one kept slipping.

Even simple little scenes like where Jackie's car has no handbrake and he gets May to hold on to it. She of course leaves it to have a go at Chan which results in another crazy stunt as the car hurtles towards them and they have to get out of the way as it smashes through the telephone box their by and into a ditch.

Then we have the finale where Chan goes about destroying a shopping mall (or so it looks,they did put it back before opening time) With loads of counters and showcases made up with sugar glass ,as Chan fights Chu's men kicking and punching his way through shop displays, ,now even sugar glass can cut you so it's not all plain sailing . We have baseball bats flying,motorbikes smashing through counters racks and displays smashing onto people and some guys taking some big falls .

Jackie's big stunt was of course the pole slide where he slides down a metal pole from one floor to another ,the pole is covered in lights ti illuminate it ,now it was supposed to have low power lighting ,but it ended up with regular house hold current, Jackie slid down the pole burning his hands and breaking his pelvis. And all this to make a film. WOW!

So that's Jackie Chan ,the star ,the stuntman,the director ,the writer and hell he even sings the end song along to the out-takes showing the pains he and his team go through to deliver a film.

Police Story is regarded as one of Jackie Chan's best movies, in his autobiography Jackie writes that he thinks it’s his best film ,this is also confirmed in some recent interviews where Jackie was promoting his newest film CZ12.

At the 1986 Hong Kong Film awards Police Story won Best Picture and Best Action Choreography . Since the making of the film ,many scenes have been recreated by Hollywood film makers, The late Brandon Lee showcased a scene from the shopping mall where Chan takes to a motorcycle. The Bus scene where Chan stops the bus is used in Sylvestor Stallone's Tango and Cash.

Both 2004 Thai film Born to Fight and American film Bad Boys 2 have smaller versions of the Shanty town chase.

And this is what Hong Kong Cinema of the 80's and 90's was about ,they created and the world imitated. And though imitation can be the best form of flattery there's nothing like the real deal and that's Jackie Chan.

The film has been released worldwide over the years in various versions ,from English dubs to subtitle releases in Cantonese . The running time of these vary from 90 minutes to 106 minutes .

Some versions omit the scene of Chan at the Shantok Police Station where the famous Noodle scene takes place. Also the scenes of Chan doing the Police recruitment posters are either omitted or shortened in some versions. I know the initial UK release by Palace Video which was a English dub was under 90 minutes ( I still have the video ) ,whilst the UK release on DVD by the now defunct Hong Kong Legends featured all scenes intact and English dub and Cantonese soundtracks along with a extended out take montage, which is the version is used for review .

Kam and Ronson have released the film along with the two sequels onto Region A Bluray in Hong Kong.. But the chances of us seeing a UK release on Bluray now after the Cine Asia label went into administration is now bleak. They where intending to re-release the Hong Kong Legends films . 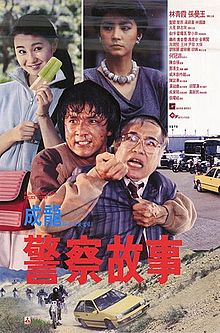 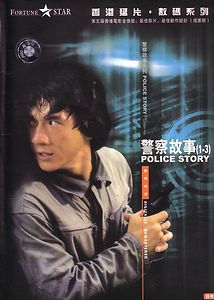 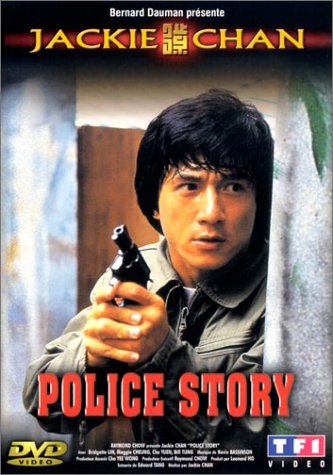 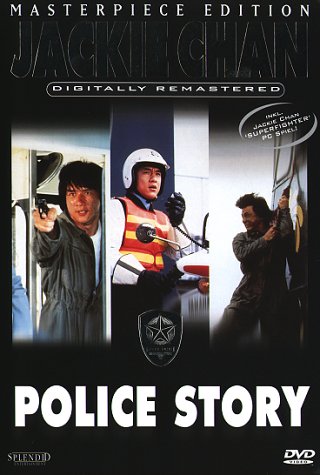 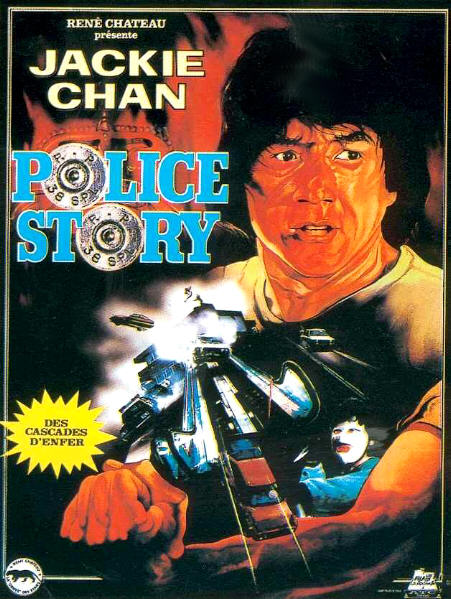 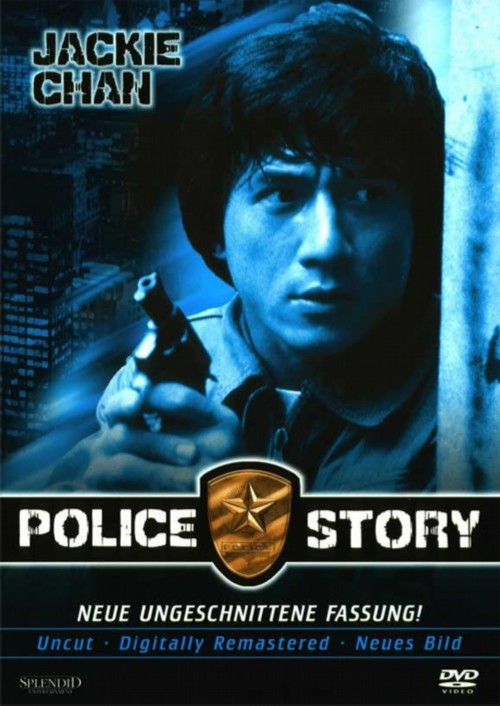 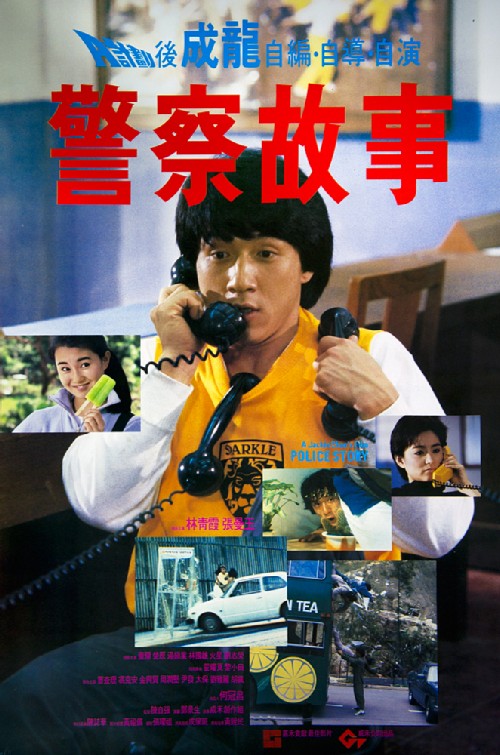 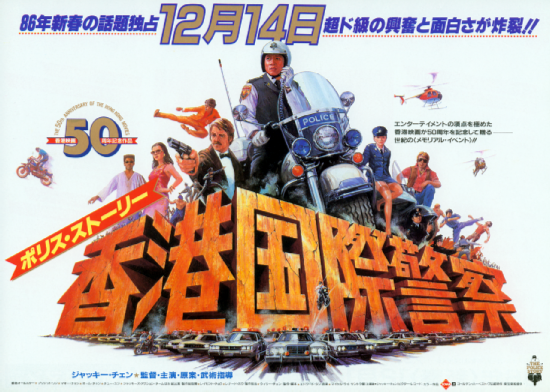 Trailers
Other films in the Police Story series on site