Revenge of the Ninja 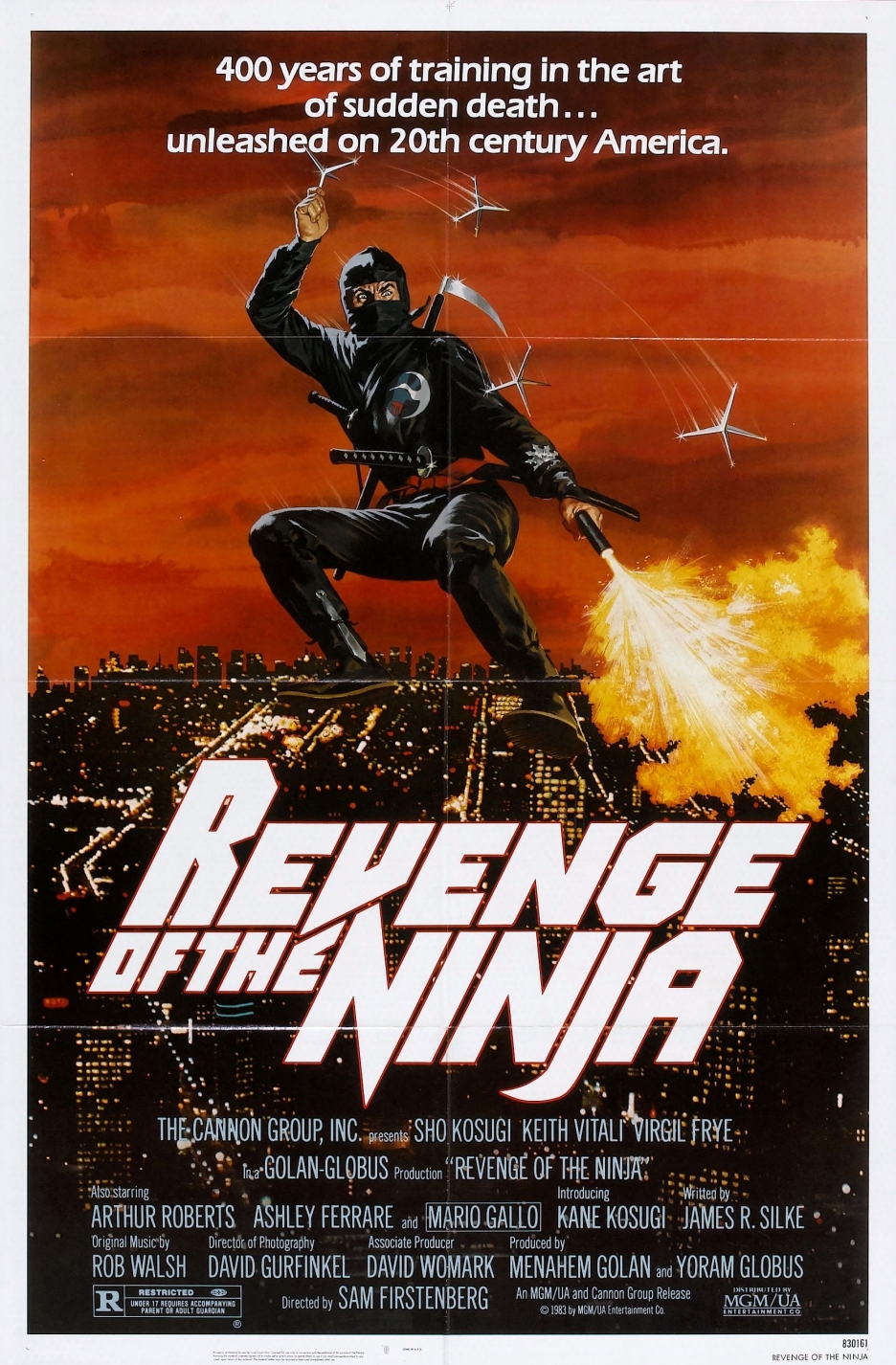 Revenge of the Ninja

Revenge of the Ninja is one of the films that Started the Ninja craze ,starting with the original 'Enter the Ninja '' which also starred and introduced us to real life Ninja ,Sho Kosugi. Where looking at this film first as it also stars our March 2011 Banner star Keith Vitali. There was also a third in the series called Ninja III The Domination . But as the stories are not interconnected you can view them in any order.

Revenge of the Ninja follows one Cho Osaki ( Sho Kosugi) a Ninja by training and heritage.When his entire family is wiped out barring his Mother and new born baby son by a team of nasty Ninja who attack his home ,lucky enough Cho manages to fend off the attackers when he arrives on the scene a little to late to save his family members.

Cho takes his friends offer of moving to the America with his Baby son Kane and his Mother who though reluctant goes anyway. Now Cho's friend Braden has the idea of opening Japanese doll show rooms and Cho would run them as a expert on the articles.

Now I was wondering at this point ,1983 America ,is there much demand for Japanese style dolls that you can open a show rooms ,which are akin to a art gallery and make a living .Well of course not Cho's good friend Braden is using the showrooms for his Drug smuggling operation ( what better way to smuggle drugs then put them in Japanese dolls) which of Cho is not suspicious of.

Now Cho lives in one of the showrooms which houses his living quarters and his training dojo. There he teaches his son Kane who is now a young boy and Kathy, Braden’s business partner and overseer for the business.

When Kane breaks one of the dolls and the drugs spill out ,Kathy tells him not to tell his father. But when she tells Braden of the incident he decides it's time do the deal and get rid of the drugs ,but when his buyer refuses to pay up straight away they engage in a war and Braden kills many men ,( Braden is really the Silver faced Ninja who lived in Japan for years and is also a Ninja).

The Police are confused and Police officer and combat instructor Dave Hatcher ( Keith Vitali ) suggests that his friend Cho may be able to help. Cho goes along to the station to speak to the captain but not interested in helping on the case he just tells them that only a Ninja could kill the victims in the way they died.

Now meanwhile Braden's buyers are getting mad and decide to steal the drugs ,they go to the showroom and rob the place but not before Cho arrives to confront them and enter in to a fight. But after a gruelling battle and even chasing the robbers van and hanging on for dear life they get away leaving Cho cut bruised and battered.

Now Braden has gone to the show room only to find all has gone and is confronted by Cho's Mother ,who he kills .On top of this Kane has witnessed this and is in the run from Braden.

When Cho arrives back at the show room he finds his mother dead and Kane gone .Dave Hatcher tries to help but Cho has other plans..As the police and Cho look for his son and the culprits ,Braden Hypnotizes Kathy so she may bring Kane to him .When Cho finds this out he decides to do something he has not done for many a year , Indulge in the way of the Ninja to save his son and wipe out the drug lords. As the fight of good and evil ensues Cho will need to use all his Ninja training to scale a building ( Spiderman eat your heart out) and stealthy attack the gangsters and come face to face with the Silver Masked Ninja (Braden) .Dave Hatcher has come along for support and gives a good few gangsters a piece of his mind and fist to.

The fianl battle will be fought upon a rooftop as Ninja vs Ninja ,Good vs Evil and honour and Justice will prevail.

Now this was the first full Blown Martial arts Film to get a total theatrical release in America. It would be the start of a craze that till this day has spawned many a film from the East and West. From Teenage Mutant Ninja Turtles-1990 to Ninja Assassin -2009 ( Which Sho also starred in at the age of 61).

The Director also directed another famous Ninja Film ,the mighty American Ninja and the producers Yoram Globus and Menahem Golan would go on to make some of the greatest American action Martial arts films of the 80's and early Nineties.

Sho Kosugi is regarded as the original Ninja in Film and his abiltiy is one that can not be faked. It is evident with his son in the film who is played by his actual son Kane Kosugi .In a couple of scenes his young son nearly steals the show as he beats up some bullies and in another when he enters into battle with the Hypnotized Kathy. Sho Kosugi is a Japanese Karate expert and trained in Shindo Jinen-ryu karate. He runs a group of Martial arts acting schools known as the Sho Kosugi Institute.

Keith Vitali who played Dave Hatcher combat instructor /Policeman in the film was given a good role as he had a few good scenes in the film one when he's teaching students in a class and one friendly fight against Sho Kosugi which was awesome. Then again in the finale he gets to kick some butt and show his ability.

So if you like your ninja films then i'm sure you have seen this one and if not ,you better get it fast. But be sure to get hold of the MGM American DVD release as earlier versions where cut for violence but in the region 1 MGM release they have all been reinstated.

Sho Kosugi as Cho (above and below)

Young Kane Kosugi is Kane ,what a awesome little fighter he is here.

In the end Cho will face his arch Nemesis.

Alternate Posters and Covers
Region 1 MGM DVD Release ,Uncut and a must have.