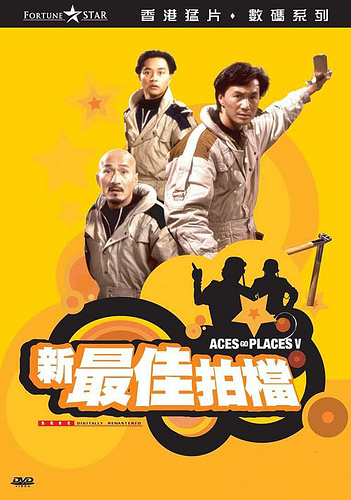 A review of the fifth in the Aces Go Places series , you may be asking what happened to the other four ,well I am doing this first as it stars our August Banner star ,Conan Lee.

Those familiar with the series will know what to expect (madcap comedy with lots of action) ,starring the legendary Sam Hui and Karl Maka as King Kong and Baldy(The Aces). Joining them in this episode is Nina Li Chi and the late Leslie Cheung as Sister and Brother Thief .

The story starts that King Kong and Baldy have retired and parted ways , both have gone the way of investments and both have failed to make anything of it.

But when a young couple disguise themselves as the Aces and steal a sacred Chinese sword from thieves that have hijacked a display for a exhibition consisting of artefacts from the Terracotta Army, Known as the Chinese Excalibur the two pose with the sword and send photos of themselves to the newspapers.

When the story goes live everyone thinks that King Kong and Baldy have stolen the national treasures . The Chinese government send in their best security officers led by Chinese Rambo ( Conan Lee) to work with the Hong Kong police.

On top of that the original thieves also want the sword back and are also after the aging duo. The thieves led by the international crime boss White Gloves has a band of crooks who are after the Aces to.

As King Kong gets a visit from Chinese Rambo he barely escapes with his body intact ,though his secretary comes of quite bad after taking some blows as she tries to stop Rambo beating her employer (though she has never been paid) .

Saved by a young girl who turns out to be one of the New Aces that have stitched him up.But when the White Gloves trap King Kong and take him to their hideout ,he discovers they have also apprehended Baldy as well .

Put into a refrigeration unit ,the two are left to cool of with the aid of one coat between them .

Even though they get out of the situation things gets worse when they team up with the New Aces and get collared by the Chinese Security forces and taken to a Chinese Prison where they are treated to some Hard core treatment . ( I just love the large wooden shoe they are forced to wear) .

After being fooled into thinking they will be shot after witnessing a fellow comrade get executed they agree to help with the re acquisition of the missing Treasures.

What ensues is a training program led by Chinese Rambo who puts the Aces through their paces ,but in the end the plug is pulled and the Aces decide to go it alone after White Gloves kidnap King Kong's secretary Ellen.

With this film as with the others it had a new director take over the reigns ,in this episodes case it was legendary Kung Fu director Lau Kar Leung. Bringing a lot more Kung Fu to the mix the action had more fighting and less big stunts that where seen in the previous episodes .

It gave a good showcase for fighters like Mark Houghton,Bruce Fontain and of course Conan Lee who had recently appeared in another Lau Kar Leung film (Tiger on the Beat) .

Even Sam Hui ,Leslie Cheung and Nina Li Chi gave very believable performances in the fight stakes even though they do not have the training of some of the other fighters.

This has some classic scenes like when we see Chinese Rambo leap about King Kong's office whilst he's throwing King Kong about. The Ice scene is brilliant as there’s only one way of filming this and it's getting in a freezer (they really look cold) .

Though not regarded as highly as the others in the series ,Aces Go Places V is a fun film whose run time will seem to short though it runs in at 100mins or so.

All of the performers give their all and with quite funny results which can only be a good thing.