Another piece of sad news for the Martial arts community is the sad passing of Hanshi Steve Arneil who was responsible for setting up Kyokushin Karate in the UK.

Born in South Africa in 1934 his family moved to Rhodesia when he was ten years old.

Hanshi Arneil studied martial arts from a young age in Zambia ( formerly Nothern Rhodesia) , from Kung Fu to Judo , later on moving to Durban in South Africa he studdied Karate and gained a Black Belt in Judo.

In 1959 he left for the fareast , arriving in Japan he studdied various karate styles and it was here he learnt of one Masutatsu Oyama and sort him out so he could learn his art.

In 1961  Hanshi Arneil began training in Kyokushin Karate under Oyama.

Hanshi Arneil was the first man to complete the one Hundred man Kumite after Mas Oyama himself.

in 1965 Hanshi Arneil came to England to promote and set up a Kyokushin school. He ended up staying and throughout the years has become a pioneer of British Martial arts and Karate. 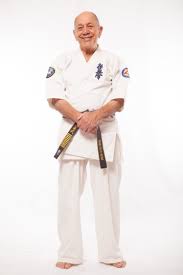 We will feature a dedicated page

on Hanshi Arneil in the future as we delve more into Karate and it's styles. ..