Just had to post this, amazes me how Xbox come up with something that will sell by the bucket load and then announce that the only way to get hold of that item is in a competition to win one.

What am I referring to? well the Limited Edition Lego Star Wars Xbox Series S consoles that their giving away to a few lucky winners across Twitter.

They Come in various guises and there's only one of each.

Put these in production and they would sell loads, .. Sometimes I wonder who does their marketing. Gotta smile though.

Good luck to those that win one though. 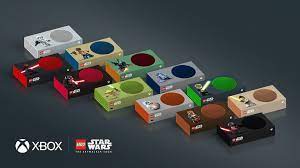