It's always sad when someone passes, but when someone is taken away before their time the shock can be hard to bear, and even more so in the case of former Japanese Prime Minister Shinzo Abe who was the longest serving post war Prime Minister of Japan.

Coming to power in 2006 after winning a tight election Shinzo Abe of the Liberal Democrat Party appealed to many with his views on how Japan should move forward. Though also controversial in many of his policies he had a vision that would bring Japan out of the delcine they where in.

Unfortunately due to ill health he had to step down just a year after taking office in 2007. After getting better through the use of a drug that at the time was not available in Japan, he soon got back into politics and aiming for the top.

In 2012 he would re-enter the election race and become the Prime Minister of Japan. He advocated the return of the Japan Self Defense Force by revising Article 9 of the Pacifist Japanese Constitution, he set up a new economic Policy, which became known as Abenomics which went about dealing with Japan's Monetary problems, a fiscal policy to help growing business in Japan, helping out small business as well as larger firms.

Growth and structal reforms to shape a modern Japan. At the heart of it all  in 2013 he also set out to make a society where  all women can shine, and vowed that by 2020 thirty percent of all leadership roles should be filled by females.

In Japan this was a big thing, as their culture is a very male dominated society when it comes to the workplace.

But it was these type of policies that made him a very popular Prime Minister not just in Japan but worldwide .

In 2020 Shinzo Abe had a re-occurance of his illness and felt the only way he could get better was to step down as Prime Minister. In August of 2020 he announced his retirement  and his successor Yoshihide Suga took office in September 2020.

Sadly on July 8th 2022 while campaigning at street junction for upcoming parliament elections in the city of Nara, Shinzo Abe was shot twice in the back by a assailant with a homemade gun.

Security tackled the perpertrator to the ground, whilst staff attended to Mr Abe. Shinzo Abe was airlifted to a hospital where doctors worked for  four hours to try and save his life, but due to the amount of blood he had lost and trauma Shinzo Abe passed away on the 8th July 2022, he was 67 years old.

Shinzo Abe's body was returned to Tokyo so arrangements could be made for his passing.

Mr Abe was a true inspiration to many in Japan and thousands of mourners are out paying their respects to a visionary Politician with which the world could do with many more like.

Shinzo Abe will be remembered as a icon of Politics, may he Rest in Peace. 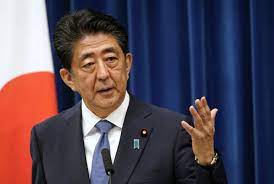 Former Japanese Prime Minster Shinzo Abe who passed away on July 8th 2022 after being shot.