More
Film Review
Back to Film Reviews
Blades of Blood 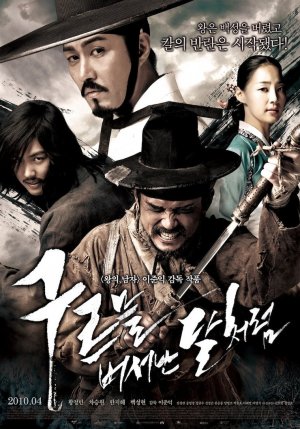 In Korean - 구르믈 버서난 달처럼
Taken from the Graphic Novel - Like the Moon Escaping from the Clouds.

Recently released by Epic Asia entertainment ,which is part of the Momentum group. The film which is based on a story by Park Heung-yong titled ''Like the Moon Escaping from the Clouds''

Set in the Joseon era in 1592 South Korea. The film which surrounds the the possibility of the Japanese invading the area , Rumours are circulating which put the government in a quarry of what to do.

With the event of political unrest and the forming of a Alliance by Korean Patriots who have little to no faith in the present governments ability to protect it's people .

When one of these Patriots (Jeong) is killed (by whom we know Not ,well not yet anyway) all points at the doings of the government ,they even have the poor man’s body dismembered and put on display through the city to put off any other rebellious actions.

But one man is not going to stand by ,he is Lee Mong-Hak the leader of the Grand Alliance. They invade the homes of the ruling government officials in a bid to overthrow the government and confront any Japanese invasion head on themselves.

But when Lee Mong Hak is challenged by the Bastard son of one of these officials he easily dispatches him dealing him a deadly blow.

It's here that he is ridiculed by a Blind Man by the name of Hwang Jeong -Hak (friend of Jeong), Lee Mong warns him to never appear before him again or he will kill him. .

As Lee Mong leaves ,Hwang tends to the young man who has just been defeated by Lee Mong . Unbelievably Hwang saves the young Man who goes by the name of Gyeon -Ja .

Now Gyeon is set on taking revenge for his fathers death at the hands of Lee Mong, but his downfall is his inability to be any good at combat. Though he does have courage ,something his half brother lacks .

It's here that the film takes on a comical element as Hwang the Blind who just happens to be a expert swordsman ( Zaitochi eat your heart out) takes liberties with Gyeon who he uses as a skivvy.

When Hwang defeats a band of goons with panache ,Gyeon begs him to teach him ,but Hwang just belittles him ,using his walking stick to bop him about the head. That is till he instructs him to manoeuvre and duck and block on one occasion.

So in a Karate Kid/Drunken Master type of scenario Gyeon learns how to fight , Also on their travels the two take refuge at a Hostess house ,where Hwang partakes in the pleasures of life and in return does a few favours for the girls ,there is also another reason why they are there to ,one of the Girls just happens to be Lee Mong's girlfriend.,Park Ji.

Meanwhile Lee Mong is readying his alliance to strike at the heart of the government in a bid to unseat the leaders and take the throne for himself.

Now Hwang Knows of Lee Mong's plan ,he may be Blind but wise he is ,though his lack of sight sometimes puts him in awkward situations.

By now the film is back into it's story of rebellion and invasion. Gyeon finds himself in a quandary when government troops arrive to arrest Park Ji ,as they know of her relationship with Lee Mong,

Gyeon ends up saving her by taking on the troops himself only to be injured and saved by the very girl he was bullying to tell him where Lee Mong was (she don't know anyway) .

It's now a race to get to the capitol city for all intended parties ,but many situations will arise ,like Lee Mong being confronted by Hwang when he least's expects ,the Invasion by the Japanese army which thought to be a month away seemed to be ahead of schedule by two weeks, In the end who will reign (it won't be the government as they have left the city to those that find it) .

Will Lee Mong reign supreme and take the throne?

Will Gyeon get his revenge on Lee Mong

Maybe Park Ji will reunite with Lee Mong and there live a happy life .

Maybe Hwang will teach Lee Mong the lesson he deserves .

And who killed Jeong ?

Blades of Blood is a fine piece of Korean swordplay , though it borrows from many films,it has a mesmerizing feel to it. The action set pieces are quite well done without to much fast cutting ,but the joys of the film come from the performance of Hwnag Jung -Min who plays Hwang the Blind Swordsman . A role which he found hard to perform ,pretending to be blind for the film was a hard task . Hwang visited schools for the blind to get a feel for the character but admits it was not easy.

For me his performance sealed the film ,he was funny and dynamic when fighting ,overall the film was good entertainment , but it's not the big action piece the English title may apply. But what it is ,is a much deeper experience providing you give it a chance .

It's a hilarious as the Korean ruler is at block heads with his government cabinet who agree to disagree on every debate,which drives the ruler crazy.

Seon Hyeon Baek puts in a great performance as Gyeon Ja ,his constant beating by Hwang is so funny ,but in the end he will perform with his heart .

I would say a definite Yes

Should you buy or rent ?

Now I would say rent the film unless of course you can buy it for under £5.00

And my reason behind this is purely ,it's one of those films once you know the ending the chance of you watching it again any-time soon I think will be remote.

Even though the film is fresh and dynamic viewing in more ways then one.

Trailers
Watch the film Now
Other Korean Films you may Enjoy

The Restless aka Demon Empire -2009