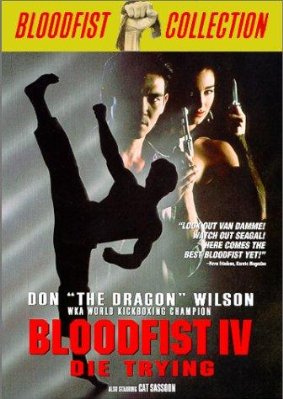 For those of us who enjoy straight-to-video martial-arts action with realistic - not Hong Kong style - fighting, the Bloodfist series always delivers. Although they stopped being in any way related to each other after Bloodfist II, all of them - some better than most - give us lots of action, and are always entertaining to watch.

*spoilers ahead..* Bloodfist IV once again stars Roger Corman favorite Don "The Dragon" Wilson, this time as Danny Holt, a repo-man for a small car-repossession business. All is going well until Holt brings in a car that happens to belong to a big-time criminal. In the car - hidden in a box of chocolates - are several nuclear triggers and the gangster wants them back, to sell to the Middle East.

Pretty soon, all of Danny's friends lie dead and his daughter is kidnapped. With the gangsters and the Police ( who think Danny is responsible for all the murders) on his tail, Holt is in a whole heap of trouble.

The storyline may not sound like much, but believe me, this film is full of twists and turns. people who you think are good suddenly become bad, people who you think are dead just get up and walk away, and many other shocking revelations. More impressively, i thought, was that even though the film has an intricate plot involving gangsters, the Police, the FBI, the CIA, chocolate bunnies and more, it never becomes confusing. And also - within the storyline - the writer even makes room for several pretty good martial arts fight scenes. You've got to love the world of Bloodfist - where everyone's a martial-arts expert!

The best of the fight-scenes are without doubt the two fights that Don "The Dragon" has against British kickboxer Gary Daniels. Gary Daniels is one of my favorite martial-arts actors with his massive build and his ultra-flexible kicks and this film is made much better by him being in it!

The only other Bloodfist I've seen (so far!) is the original one, so i cant compare this one with many others, except to say that its better than number 1. But i really enjoyed this film and wouldn't mind seeing other Bloodfist films. Overall, it had a very good storyline, a decent amount of fights including two very good ones, and was pretty enjoyable. In no way is it a classic martial arts film (i don't think any film starring Don "The Dragon" could be called a 'classic') but its a good film to watch every now and again.

Another thing, watch out for the late (she died in 2002 of a heart attack),rather nice-looking Catya Sassoon - daughter of Vidal Sassoon - as a knife-wielding assassin. she shows little ability here, but apparently she was a North American Forms and Weapons Champion.

*theflyingninja is a avid martial arts film fan and has done many reviews over the last few years.All of which have appeared on the IMDb site.
Stills
Don ''The Dragon Wilson is a Repo man in Bloodfist IV
You try repossessing a car from Gary Daniels
Mixed up in intrigue Don must get his revenge
Cat Sassoon ,ends up helping Don rescue his Daughter ,but Not before giving him grief
Spot the Bad Guy!
Video Trailers