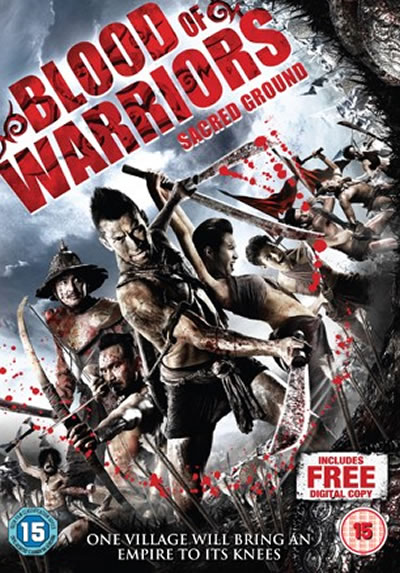 Back in 2000 there was a film released called Bang rajan ( later released by Premier Asia in the UK). It was the story of how a the people of the village ''Bang Rajan '' fought for their lives against the Burmese invaders back in 1767 .

The film was a historic feature about how the determined people of Siam ( now Thailand) fought like warriors to protect their land. The film followed the plights of the villagers as their warriors fought while the the others provided medical attention,preparing food and such like.

For me the film was interesting but found bonding with the characters was hard as you never got to get to know any of them because of the many characters in the film.

Ten years later and Thanit Jitnukul is back with a sequel and a bigger budget by the look of it. Now I must admit I got the film under it's UK title ''Blood of Warriors'' and it was only after looking at the cover properly and reading it that I thought ! IS this a sequel to Bang Rajan? After some googling I was proved right , I also admit that if it had been released as Bang Rajan 2 I most likely would have not got it.

So can this film surprise me and be better then it's predecessor?

Right the film is set again in the Ayutthaya period of Siam a small village strive for survival by trying to be a contained unit ,their warriors ( the Yantric Cloth Warriors) go out on patrols and often save fellow countrymen ,this also means they bring back more people to the village which in turn puts pressure on the villages resources.

On top of this the village plays host to a highly revered Monk by the name of Bhikki .He is the Burmese's bug bear as he in-stills hope and courage amongst his people.

Now the Burmese General (Suki) is deploying his men in all regions and his main attack is the capitol city Ayutthaya.

Out on patrol the Yantric Warriors come across a ambush in waiting ,The local army of Siam is on patrols in the area and get ambushed when the Burmese use slaves disguised as Burmese in small numbers to lure them out. Of course once out in the open the force of the Burmese army attacks and hopes to flatten their enemies.

Now the Siam army is led by Phya Lhek a respected commander and patriot of the Siam people and country .

As the Burmese attack in force the Yantric warriors who are watching dive in to give a hand as the Siam army is way outnumbered .

After the battle many are dead and wounded ,the Yantric Warriors bring back the army and their commander to the village ,With even more mouths to feed tensions start to fly high as some believe they should leave , the army wish to recruit more people to their cause ,but some are not so enamored with there means of getting people to help. Certain believe the army planned to recruit villagers and the truth be known ,it's true.

But the final decision will come down to the Monk ,Bhikki ,who is under threat as well as the Burmese have sent out spies to kill him .

By ravaging Siam Villages the Burmese have taken slaves and hold families to ransom by getting Siam people to do their dirty work against their own kind.

Now I must say at first I saw the same problem as with the first film in that with so many characters getting to know each one is Nye on impossible. And there are a lot of characters to learn about ,you have the villagers and the Yantric Warriors who all have their loved ones to. Then you have the soldiers of the army each with their own colourful characters. But I did get to distinguish between some of them and follow their stories ,like the relationship between Mun ( the kind of head of the Yantric Warriors ) and his pregnant girlfriend ''Jumpee'' . Unlike the first film not everyone’s got the same clothes and haircut so as not be able to recognize any one.

The battle scenes are much longer in this one giving a sense of achievement in the peoples efforts to survive. Also the battles are quite well shot with some long shots and though extremely bloody ( in the first battles you need more hands to count the heads flying) Also some scenes are shot in a 300 kind of view ,though not to many I’m glad to say. Not that I dislike 300 but each film should have it's own style and not copy to many others blatantly.

So all in all Thanit Jitnukul has achieved in making a better film then the original in most ways. But the truth in battle is that there are no true winners and this film portrays this ten fold as you witness the countless bodies and lives lost within each battle.

So good one on Epic Asia's part as releasing this as Bang Rajan 2 may have stopped quite a few copies being sold ,this way many will purchase the film and might invest in the original if they can find it.

Score out of Ten = A thought provoking 8

The Version reviewed is the UK region 2 release from Epic Asia It features a making of and a digital copy to.