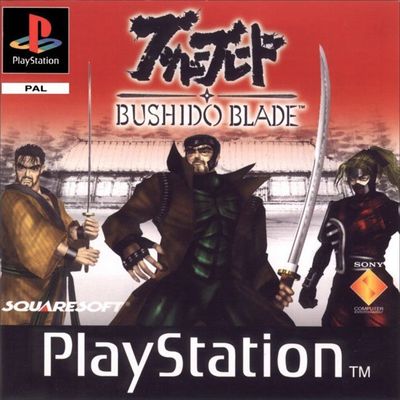 By 1997 fighting games had moved on in terms of not just graphics ,the likes of Virtua Fighter in the Arcades and Saturn and Tekken another Arcade game that appeared on the PlayStation had reinvented the Beat'em up with 3D environments and polygon characters and all with game play and a roster of moves to match .

So what else cold they change to make a new style of fighter? ,well all games had health bars which you had to deplete to win the round or match , you could land a crazy number of hits on your opponent and he would get up for more .

So How do you make it more realistic ?

This is how, in 1987 game developers ''Light Weight '' made a new style of fighting game and released it through Square Soft and Sony for the Sony PlayStation.

The game was ''Bushido Blade'' and it took the fighting game and turned it into a more realistic fighter , they did this by doing away with character Health Bars,Timers, taking away limited boundaries and by making it set in a Samurai era where attackers used bladed weapons which could kill with one strike .

Keeping the trend of polygon worlds and giving the players a feeling of space by allowing the players to run around a large area ( no boxing rings or cages here) . Each player would choose a character from a Samurai era and with the characters chosen weapon ,whether it be a Sword,Dagger ,Spear or staff would engage in a battle for supremacy.

Being bladed weapons the right blow could kill a character instantaneously, you know a well timed slice or slash with your sword could see your opponent laying dead on the ground within seconds of starting or in other cases the match could go on for ages as the two players hacked and slashed at one another. Sometimes one player might strike a opponents leg rendering the character wounded , the character would scrabble along the ground trying to defend as the opponent tried to finish his kill.

But being wounded did not always mean you would lose , after taking many blows ,you could get in a clean strike and kill your opponent in a jiffy.

Now story wise the game is set in a modern era ,only the location is from the Feudal Japan period Set in a modern city which has a Fictional 500 year Old Dojo known as the Meikyokan ..

Completing this are a roster of Seven Playable characters and varied locations to battle in from Castle grounds and Bamboo Thickets and forests.

With the ability to run and jump and climb as well Bushido Blade is one of the must have games in your Beat'em Up collection . With such a sense of freedom given to the game ,Bushido Blade went down as a instant classic as players battled each other with Sword against spear or one of the other available weapons.

Rated as one of the Top 200 best games by 1UP.COM and rated highly to with IGN giving the game 8.7 out of Ten and Gamespot handing out a respectable 8.9 out of Ten on it's release in the States.

A sequel was made and the series lived on in the Kengo series ,but in the end there is only one Bushido Blade and what a blinder it is.