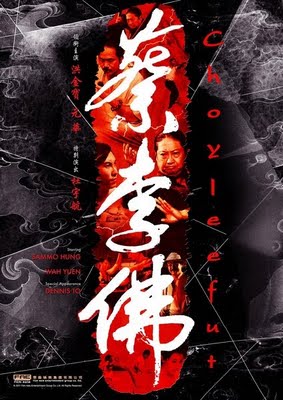 A movie about Choy Lee Fut is something of interest to many, and to top that it stars Legendary stars like Sammo Hung and Yuen Wah . So is this the martial arts film you have all been waiting for?

The story is quite simple really, Two friends who are in Europe (in fact the UK ,but it's not really it's a Chinese Set ) , played by Sammy Hung ( Playing Chan Wai Yip) and Kane Kosugi (playing Takeda Shosa). So not only do you get two legends of Martial Cinema ,but two sons of Legends of Martial cinema.

Anyway Takeda wants to learn Kung Fu ,even though he is a Karate Expert ,his Kung Fu of Choice is Choy Lee Fut. Now Chan Wai Yip is a Kung Fu exponent trained by his Uncle and Father who jointly own a Kung Fu school back in China. Yip invites Takeda to come to China to learn Kung Fu from his Uncle ,Chan Tin Chuek ( Yuen Wah) .

Takeda agrees and they head on to China , when they arrive at the school Takeda notices the school sign and is very excited as his uncle teaches Choy Lee Fut.

Yip's Uncle is a reluctant teacher and leaves it to the seniors to instruct. But something has come up which puts the life of the school at risk ,when a rival Martial arts school turn up to say they have signed a deal to take over the school . Of course Yip does not believe it till they see the signature of Chan Tin Loi ,Yip's father .

The only way to save the school is to enter into a competition to see who is the best and the winner will retain the school.

So Now we have the two young men training to get ready for a competition , at first their senior is not so keen and teacher Chuek seems distant from the event ,it is of course a ploy to get their senior to join the competition .

Now intertwined with this is the story of Yip's relationship with the rival schools representative ( a girl named Xia) who flirts with Yip . What starts now is a grudge match as the rival schools head fighter has a thing for the same girl .

Thing is very much of the film surrounds Yip's relationship with Xia and his rivalry with the rival schools head fighter who has a haircut that resembles Jin from Tekken.

A whole central part of the film has Yip and Xia on a date which involves them doing everything possible in just one day, and all this while Yip's rival waits in Xia office for what seems 12 hours just to see her ( can't he see she ain't coming back today).

From a fight point of view the film does showcase some good fights, but there's not enough of them during the film , There are some great scenes where some great masters come and teach the boys ,but once again these scenes are over far to quickly ,in fact they are considerably shorter then the amount time allotted to the date Yip has with Xia.

When it comes to the final action set pieces once again there shorter then one would expect of a film that's apparently about Kung Fu.

As far as the stars themselves ,Sammy Hung shows he has talent and is one to watch, Kane Kosugi is very good as the Japanese friend who takes up the mantle to fight for the school. But sadly lacking is Sammo Hungs screen time is little more then a cameo ,he appears at the beginning of the film and at the end and gives the whole story a twist ,but not for the good ,you may wonder why you just watched this film for .

Yuen Wah is funny as the eccentric Uncle of Yip and gives a good performance, but the only fight scene he has is with Sammo in a kind of dream-scape scene that’s shot on a Green Screen for sure (why I don't know, maybe they did not want to get cold outside) .

Overall the film is a let down ,as it is billed as a Sammo Hung film, and even though some say he was responsible for the fight Choreography ,it does not show in this feature .

In a nutshell, it's story is mind numbing full of nothing at times, too much time is given to the love triangle and where's the fighting amongst this ? , well mainly only really at the end of the movie.

Choy Lee Fut is not the worst film you could see , but if you go expecting a Kung Fu fest then your be sadly let down .

Score out of ten = A very Average 5