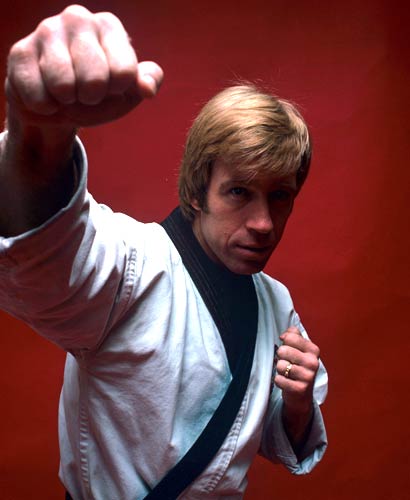 We all Know of Chuck Norris a world class Martial artist who came to fame in the Bruce Lee film ''Way of the Dragon''but before this he was a competition fighter who won numerous fights in competition and was the world Karate champion a astonishing 7 times.

As a child Norris was shy and uninterested in studies ''he day dreamed a lot''Often bullied he dreamed  of beating his adversaries.Home life was hard on Norris as his father was a drinker and this affected him.

In 1958 he signed up to the Air force and became a Air Policeman (AP). It was from this that he was sent to Osan air base in South Korea and this led him to undertaking the art of Tang Soo Do.He attained Black Belts in Tang Soo Do and from this came Chun Kuk Do a art he devised himself from his trainings.

He later went on to set up federations such as Kickstart ,a organization to stop drugs in schools.Norris left the air force in 1962 while based at a base in the USA.He set up Karate schools in his local area's  ,these schools had students that were famous or where about to be,like Steve Mc'Queen and Chad Mc'Queen .

In his first two tournaments Norris was beaten by the Legendary Joe Lewis and Allen Steen.But with perseverance he continued to compete and began winning against top fighters like Skipper Mullins, Arnold Urquidez, Victor Moore, and Ron Marchini.

In 1968 Norris felt his last defeat  Louis Delgado.He avenged his defeat to Delgado and in turn  won the Professional Middleweight Karate champion title, which he held for six consecutive years.In 1969, he won Karate's triple crown for the most tournament wins of the year, and the Fighter of the Year award by Black Belt Magazine.

Now Chuck Norris's own Chun Kuk Do has many schools and students must abide by the Tenants set out by Chuck.In a similar way to Taekwondo's or Tang Soo Do's own Tenants.Below they are listed for you .

Chuck's first film acting  role came when he was offered a part in the Dean Martin film ''The Wrecking Crew'' in 1969, but it was after attending a martial arts demonstration in Long Beach California in 1972 that changed it all for ever ,because it was here that he met Bruce Lee and the two hit it off and Chuck was offered a part in ''Way of the Dragon''. 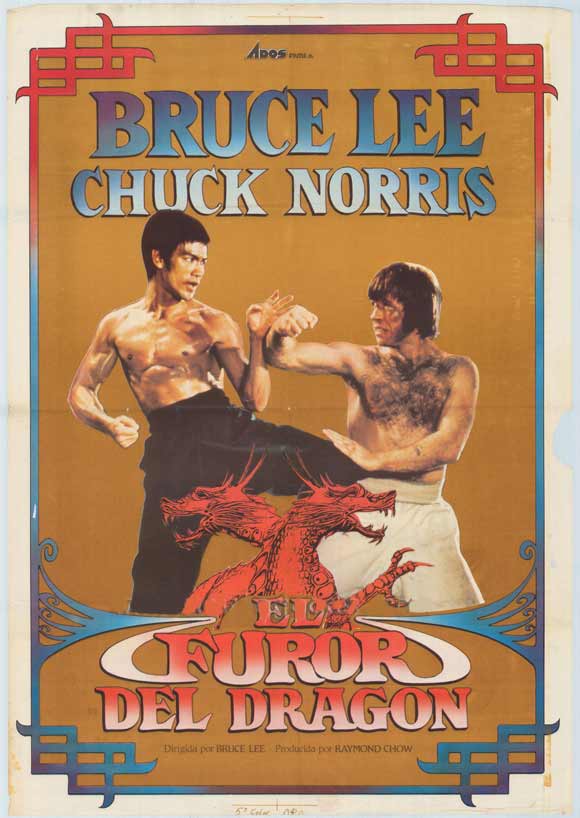 From this he was cast by Golden Harvest in a Tan Tao Liang action-er titled Slaughter in San-Francisco (1974) ,again he played the villain,but Western releases site Norris as the main star ,in some territories the film is labeled as ''Karate Cop''. 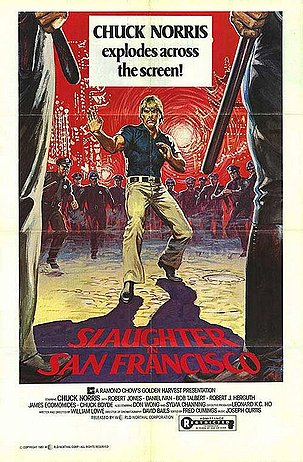 Above the poster for Slaughter in San Francisco ,below the Karate cop version 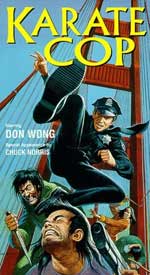 But in 1977 Chuck Norris was given his first starring role in Breaker Breaker which led on to the 1978 film 'Good Guys Wear Black'' which was the film that kick started his film career in my opinion. 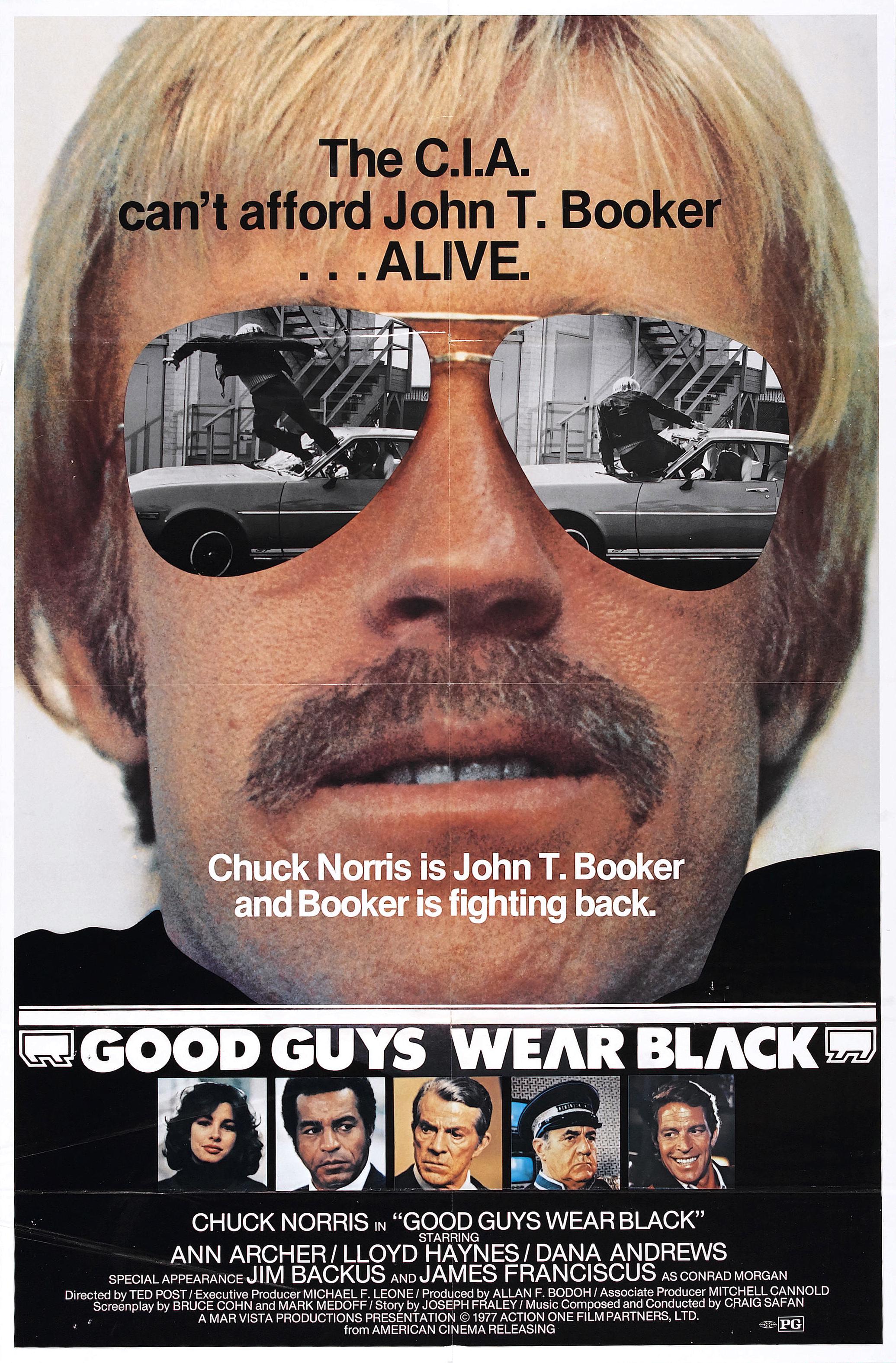 After this many films followed from the mighty ''An Eye for an Eye'' which also starred Mako and Lee Van Cleef.Other films that did the rounds and set him on the road to box office hit where ''The Octagon'' Force of One''Forced Vengeance''Silent Rage .

But some of his biggest films came from the deal with Cannon films and it's producers Israeli cousins Menahem Golan and Yoram Globus .

In 1984 Chuck starred in ''Missing in Action '' a film that dealt with the Vietnam war and it's unsung hero's .( Chuck's younger brother Weiland died in Vietnam in 1970).The film was a huge success and spawned two sequels both dealing with ''POWS'' missing in action.

Many of Chuck's films are produced by his brother Aaron Norris who is a film Producer.

Many of Chuck's films are not all out martial arts films  and as this site deals with the Fight flicks mainly not all of his films will be reviewed on site or featured in depth like the earlier films he done .

**For the more gun orientated Chuck Norris action films you won't have far to go as all these films will feature in our Shoot'em in the Head section on this very site. 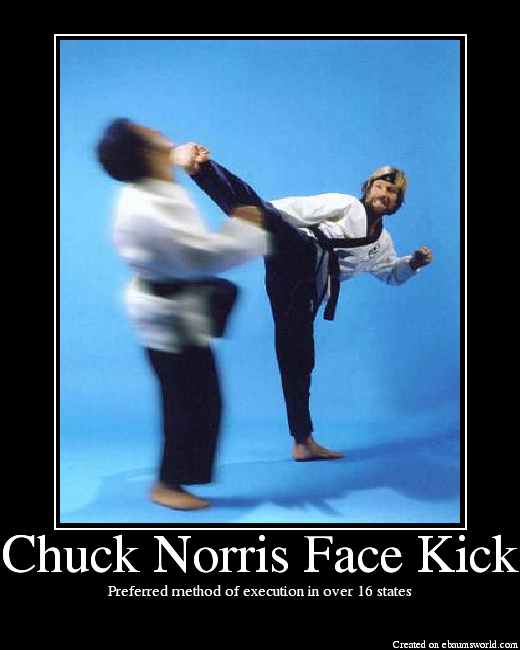 In 2005 a absurd thing happened when on the internet started a list of facts about Chuck Norris that hails him as the greatest Hero of mankind and that he is so tough that no one dares confront him.It all started as a Vin Diesel gag but various people converted it to Chuck and it is this that has taken the world by storm.There are over 400 known facts with others appearing all the time.In the face of it Chuck has expressed a liking for them and make him laugh (though some are a bit near the mark,though those are rare). 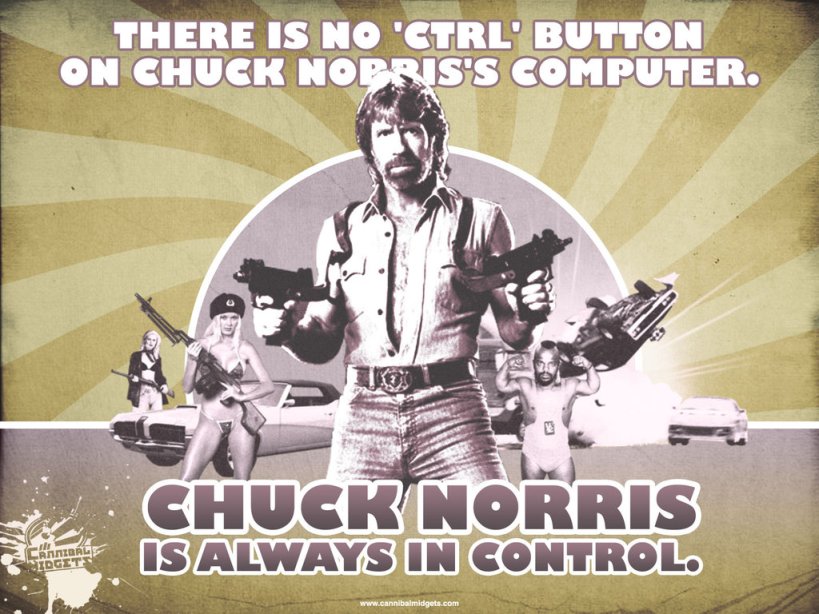 A true story about a bakers in Croatia Where they put up a poster of Chuck and all their troubles ceased,read below.

*This article was taken from Tonyrogers.com who reported the story in the West.

Store bosses have seen off burglars by placing a life-sized photo of Hollywood action star Chuck Norris in the window.

The posh bakery shop in Split, Croatia, had been broken into almost every week until they put up the poster of the karate champ with a sign saying: "This shop is under the protection of Chuck Norris."

Now the bakery hasn't had a single burglary for more than a month.

Sales assistant Mirna Kovac said: "To be honest we just started it as a joke but it really has worked. Thieves haven't been anywhere near us for ages. People seem to respect him.

"Everyone around here has seen his films and he's quite a popular character, perhaps even among criminals, so they've decided to leave us alone."

She added though: "We have had a few customers come in and ask us whether they can get Chuck's autograph. They really believe he is sitting in our storeroom out the back ready to pounce on any burglars."

Now that's crazy ,it seems that the facts have adverse affects on people ,maybe Chuck should run for President.

Here are some other Facts about Chuck ''You know there True!

1. A ducks quack does not echo. Chuck Norris is solely responsible for this phenomenon. When asked why he will simply stare at you grimly.
2. A high tide means Chuck Norris is flying over your coast. The tide is caused by God pissing his pants.

3. A study showed the leading causes of death in the United States are: 1. Heart disease, 2. Chuck Norris, 3. Cancer
4. According to Einstein's theory of relativity, Chuck Norris can actually roundhouse kick you yesterday.

5. After taking a steroids test doctors informed Chuck Norris that he had tested positive. He laughed upon receiving this information, and said "of course my urine tested positive, what do you think they make steroids from?"
6. Aliens do exist. They're just waiting for Chuck Norris to die before they attack. – They will never attack

9. Chuck Norris built a better mousetrap, but the world was too frightened to beat a path to his door.
10. Chuck Norris can do a roundhouse kick faster than the speed of light. This means that if you turn on a light switch, you will be dead before the lightbulb turns on.

In 1997 Chuck was awarded a 8th degree Black Belt in Taekwondo and believed to be the first westerner to achieve this Goal,but Norris was misled as some years before there where two other Westerners that achieved this and one of them received his 9th degree in the same year as Chuck.I know i have checked!

In 2000, Norris was presented the Golden Lifetime Achievement Award by the World Karate Union Hall of Fame.And in 2005 he set up the World Combat League (WCL), a full-contact, team-based martial arts competition. Each team (consisting of 5 men and 1 woman) is from a different city or region, and the league intends to grow to more cities in the United States and have both European and Asian leagues.

On top of that he also has his own range of Gym equipment called ''TOTAL GYM'' . Below is a video of Chuck and his wife(  former model Gena O'Kelley) demonstrating the system.

After a ending his film career due to the demise of Canon ,the last film he starred in was The Cutter in 1995,though he has produced one with his son starring only in 2009.

In 1993 Chuck began shooting Walker Texas Ranger  ( which to me looks inspired from his character in Lone Wolf Mc'Quade) It lasted 8 years being aired on CBS and the Hallmark channel.And Chucks Walker character also turned up in Sammo Hung's ''Martial  Law'' series then part two of that story continued on Walker where Sammo appeared.

August 2012 sees the release of ''The Expendables 2 ''' the sequel to 2010's ensemble cast action film by Sylvester Stallone. Joining the Cast is Legendary Karate Master Chuck Norris who shows he can still frighten the living daylights out of you when you've been bad ,Not bad for a man in his 70's well here below is the Expendables 2 Character poster for Chuck and a couple of stills. Review on site as soon as it's released.

Chuck and Arnie join forces in the Expendables 2

Chuck sneaks up on his enemies - Expendables 2