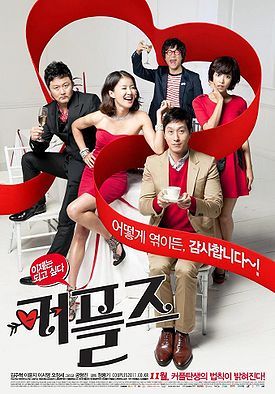 Couples is a Korean comedy by Director Jeong Yong-Ki, it's actually a remake of a Japanese film from 2005 by Kenji Uchida ,''Stranger of Mine''.

The film follows the relationships of a number of couples whose lives cross in day to day life. The main protagonist in the film is Cafe owner Yoo-Suk (Kim Ju-Hyeok).The premise of the film looks like your average relationship film ,but what you have here is probably one of the funniest films I have seen in years.

The film opens with Cafe owner going to his Bank ,whilst waiting he sits next to Female Police Officer Ae Yeon (Lee Yoon-Ji) ,it's at this moment that the bank is held up by robbers .

Forced together the customers are bundled together, when our nervous Kim tries to console a rather large woman (who he believes to be very frightened ) she accuses him of sexually harassing her ,unfortunately being crushed together with all the others Kim is in line with her rather large breasts and trying to avoid looking at them is nigh impossible when there centimeters away from your nose.

What makes matters worse is the reluctance of Police officer Ae-Yeon to act as she's only a traffic cop. But after the robbery has passed Kim-Suk must answer to his actions at the Police station when the rather large lady persists in wanting to press charges against him as a sexual pervert.

It's only with the intervention of Ae-Yeon that he is let off.

Now Kim -Suk has been down on his luck and his day seems to go from bad to worse when he is involved in a car accident (again not his fault) ,the other driver checks he is OK then proceeds calling the Police claiming it's Kim's fault and that he thinks he is severely injured and backs this up by laying on the floor.

To top this Kim has been in a relationship with another girl by the name of Na-Ri who has vanished on him ,literally leaving him sitting in a restaurant, and he has not seen her for more then two Months. He asks his friend Bok-Nam to help track her down.

Bok Nam does find her and phones Kim to meet them at the restaurant on the very same night that he has had is bad luck.

Arriving at the restaurant Kim waits for Bok Nam ,who appears minus Na-Ri,saying she does not want to see him ,when Bok gets a call on his phone he tells Kim he just going to the toilet ,sitting alone for a while Kim phones Bok who says cannot come back due to something coming up. Kim says he must as he No money to pay for the drinks they have had as he left his hose minus his wallet.

It's now that he spots Police officer Ae-Yeon (who has been stood up by her friend ) he figures if he can get to sit with her he can get her to pay for his bill and pay her back. Thing is Ae-Yeon is in the same predicament and also has no money due to being pick-pocketed. She also believes she can get Kim to pay for her .What follows is a well plotted scenario of the two coming up with the idea of giving in her engagement ring and her fiancée Kim will pick up when he returns to pay the bill the next day .

Now while this has been going on the truth behind Kim-Suk's Girlfriend Na-Ri is that she has swindled a load of money from a big Korean Crime Boss who she has been in a relationship with, she also has involved Bok-Nam who has been trying to help her return the money without getting his legs broken.

So how much more crazy can the day get ,well after Ae-Yeon accompanies Kim-Suk back to his place and he decides that she must be the girl for him he goes on cross country chase after the Taxi she has just left in to tell her how he feels about her. Ohhh! and guess who the cab driver is?

Couples had it's International Première at the Terracotta Far East Film Festival in April , attendance of the film was low due to it being a early showing ,but due to it's well thought out plot,well rounded characters and of course perfectly timed comedy you would have believed you where sitting in a sold out showing due to the constant laughter from the crowd viewing.

Couples is a perfect piece of cinema from Korea ,showing they can take Hollywood idea's and turn them into something Hollywood could only dream of making.

What makes Couples work so well is the comedy is well timed and a good mix of well timed gags,Slapstick (but not to OTT) and all with a slight undertone of a black Comedy .

If you see one Romantic comedy this year ,then Couples should be it.

Score out of Ten= A Rib Cracking 8