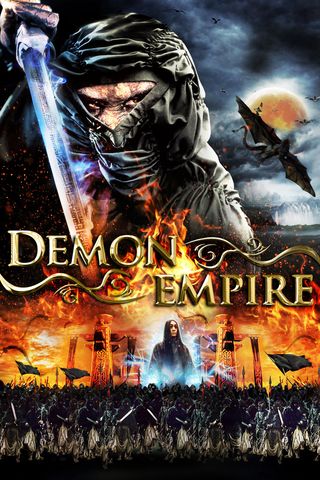 This is a film which was released back in 2006 in Korea Under the title of ''The Restless'' or in Korean ''Joongchun'' or as some spell it as Joong Cheon. The Korean Title translates as ''Mid-heaven'' which is a probably a more fitting title to this Fantasy film about Lost Love and Demon Slayers.

The film is from the makers of the epic ''The Warrior '' ,with designs  by the teams behind films like Akira Kurosawa's ''Ran''.

So what we have is a the story about a young man called Yi Gwak who after losing his loved one ,Ywon Hwa , after she is accused of bringing demons to the local villages . She is burned as a witch.

Yi Gwak who knows this was not the case ,as he himself was responsible . Depressed and not liking life he is enlisted by the Royal Demon Slayers who go around vanquishing Demons. In his new family he is content and promoted to the leader and the holder of a special Demon slaying sword.

But when betrayal lurks within the Empire's walls the head man ( Ban Chu) decides to take the law into his own hands , all against the wishes of Yi Gwak who advises against it. The Group attack and in the process get slain ,Yi Gwak arrives to late to save his friends.

Now some time passes and Yi Gwak is a Vagabond who vanquishes demons as and when he can,one day he helps a village and they end up poisoning him as they recognize him as the last of the Demon Slayers ,of which there is a bounty for.

He escapes but falls in to a stoop-er ,he awakens in a strange land surrounded by people all dressed the same in a place of tranquility. But when he is discovered to a live human the surrounding people are scared , you see Yi Gwak has landed in Mid heaven . A place where peoples spirits wait to be reincarnated.,but the surprise for Yi Gwak is that the overseer of Mid-heaven is a young girl called So-Hwa who bears more then a striking resemblance to Yon-Hwa.

Now all this tranquility will be disturbed when a band of spirits attack the waiting spirits and start killing them . They want a special stone that So-Hwa has in her possession ,so they may return and rule the human world.

Yi Gwak saves So -Hwa as he is mesmerized by her ( of course she has no memories of him as she is a celestial spirit).

On top of this the evil spirits that attacked are led by his Old Demon Slayer buddies and now Yi Gwak will fight a battle to save Mid Heaven and So-Hwa while trying to deal with his old friends who hope he will join them.

Demon Empire is a lavish film with amazing looking sets and lots of special effects ,for me it may have had slightly to much special effects incorporated within the fight sequences then I would have liked . If you look at the recent films like Detective D or Reign of Assassins which had a good balance between real martial arts and special effects.

It's probably more acceptable here as we are in a Celestial place. Now don't go expecting a constant flow of action scenes as the film is as much a love story as it is a action film .

Jeong Woo Seong is brilliant as Yi-Gwak as he experiences the wonders of Mid-Heaven and tries to get So-Hwa to remember her past from her Human life.

There are many great scenes of battle with some effects that would not look out of place in a XMEN film, but combined with lush forests and beautiful backdrops ,you might be mistaken and think your watching House of the flying Daggers or Hero.

There's also some light hearted humor ,like when one of the overseers creates a street of gambling vendors and food stalls ,so the waiting spirits can remember some things from being human,this shocks So-Hwa who on a journey gets lost when she comes across this back alley in Mid-Heaven's celestial gardens.

The film comes in about 100mins and is not to long. Well paced scenes with out to much lingering on unimportant scenes works well for the film .

I do feel the English title for the region 2 release is a little misleading and the cover to. I think the title of Mid-Heaven or Heavens Gate would have been a better title .

But saying this I really enjoyed this film and if you liked the ''The Myth'' with Jackie Chan then your sure to love this one . With a great cast ,great soundtrack and some fine acting all round ''Demon Empire '' shows love has no boundaries and neither do the lengths people will go to have power over others.

Score out of Ten = a Mesmerizing 8

Version Reviewed was the 2011 Release from Epic Asia ,under the title Demon Empire.

Both Trailers from the Korean release as ''The Restless''

and as ''Demon Empire '' in the UK from Epic Asia.

The original poster from Korea ,under the title ''The Restless''