On the 6th of November 2013 we attended a special screening of Hide and Seek to open the 8th London Korean Film Festival .With the official gala happening the next day on the 7th we attended the Haymarket Cineword cinema in London's West End . But the night was not just about the film ,but about showcasing the popularity of Korean Cinema which has become more and more popular over the years.

But also to promote the festival to new comers and encourage more cinema goers to watch foreign media ,it's not all about the Hollywood films you know.

The evening started of with the signing of the Memorandum of Understanding by the South Korean and UK Ministers for Culture ,this event was hosted by Film maker and back bencher David Puttnam ,who also a big fan of Korean cinema.

After this we had film critic Tony Rayns talk about Korean Cinema in the UK and then we had a gust of honor in the form of President Park Geun-Hye who arrived in the UK a couple days earlier on her State visit.

With TV cameras and photographers clamouring for the best spots to get a picture of South Korea's first Lady President.

In between all of this we had previews of the films coming to the festival and a look back at the previous years to.

Then of course after this we had the film Hide and Seek by first time director Huh Jung , and to be honest I did not know what to expect but one thing for sure it's a film that will leave a lasting indent on your brain. - for the full picture read on.

Now Hide and Seek is a film by first time director Huh Jung who also scripted the story . Made on a budget of 2.5 Billion won ( 1.47 million GBP) when most films are costing five times as much or more to make in the region .

What’s more the cast for the film is not overly large with only about four or five main protagonists.

Song Soo is a happily married man with a wife and two children who lives in a nice apartment in Korea and is quite successful in business.

When one day he gets a call about his brother who has gone missing, now being that Song has not spoken to his brother in years due a to a falling out as children he finds it strange that he should be contacted.

When Song's wife Min-Ji is saved by a resident of the block from a slightly crazy guy ,the resident Joo Hee invites them in for tea. Joo Hee lives with her daughter in the apartment opposite Song's brothers apartment.

But when Song explains he is looking for his brother that lives across the way ,Joo Hee shouts at them telling them to leave and begging Song to tell his brother to stop being a pervert and staring and peeping at them .

Upset by her ordeal earlier Min-Ji is starting to think that Song should have nothing more to do with his brother but Song is curious and wants to find out what has happened.

Song visits the block again and here he discovers little signs etched under the doorbells of each apartment , they disclose how many Males ,Females and children live in each apartment.

It gets even worse when he discovers these same marks back home on the apartments he lives in .

There's also the feeling that they may be being watched and when Min Ji and the children are attacked by a Helmet wearing assailant in their own apartment block ,Song believes there's more to his brothers disappearance then meets the eye .

With security tight at home ,and every one wearing a Helmet is given the third degree ,

When Song discovers he is being followed he ends up in a fight with a man who believes Song himself to be a danger .

But what the pair discover will turn a mystery into a full blown nightmare where here be looking over his shoulder every five minutes.

Hide and Seek is a tight thriller with slasher movie overtones, some of the scenes are very in your face and deal with home invasion of a alternate kind , it's film that will have you jumping out of your chair ,but it's also a a film if you dissect and look beyond the characters and story and look at the film it self , looking at the surroundings of the characters and clothing their wearing may give you clues to who is hunting who and what has really happened to Song's Brother. .

But what's really convincing about the film is the intensity of the acting of the cast and especially the child actors and actresses who give quite amazing performances that I was actually fearful for them while watching.

I must admit I did jump out of my seat a couple of times ,but this may have been due to the group of girls behind me that shrieked at the top of their voices each time something happened..

There where times when he whole audience was working in unison with each shock moment. It became apparent that Hide and Seek is one clever film to have the effect on the audience it did.

And many after on social networks have said they where in fear of going to bed that night and checking the wardrobes for who ever may be lurking inside.

Huh Jung has written a great story with a edge on originality and then managed to convey all this on screen using a cast of perfect actors and actresses for the roles.

I can not think of another film more perfect for starting the Korean Film Festival this year ,because it's one that will leave a lasting effect on your mind not just for a few hours but a few days .

Wait was that a shadow at the window? 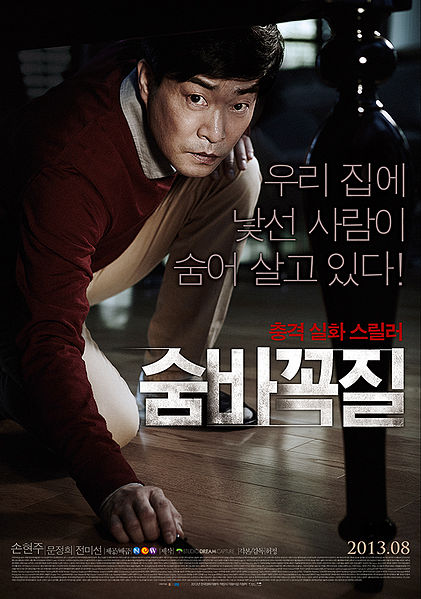