This is one of those films I have been waiting to see for a while, but the Japanese import was like £60.00 to buy, so I waited till a US RELEASE of the film before investing a lot less.

Now as with all films that you wait for in anticipation, we are often let down more than Not. But I can rightly say that 'High Kick Girl' was worth it.

Rina Takeda a real-life Karate champion stars in this film as Kei a high school student and Karate Student under Yoshiaki Matsumura. Now Kei is a Brown Belt and longs for her Black Belt. She does not understand why her Sensei will not grade her, so she goes around challenging the Black Belts at local schools and beating them.

Her Teacher Yoshiaki tries to explain it's not about fighting and beating people but spirit and patience. He makes her practice forms as her base but Kei sees it as a punishment, not fully understanding the essence of Karate.

Still perturbed she still wants to prove herself to her Sensei. Now mysteriously Kei gets a phone call from a man asking her to come and join The Destroyers, who are a group of Martial artists who for a price will do your dirty work or any other criminal activity.

Thinking this is her chance to prove herself she goes along, only to be met by more young girls who confront and fight her ( it's so much fun watching these young school girls beat the stuffing out of each other )

The thing is it's all a ploy to kidnap Kei and get her Sensei to rescue her. The Destroyers want to kill him and getting to Kei they have their chance.

When Yoshiaki hears what has happened he acts on impulse going to the rescue of Kei.

Now this is the guy from the film 'Black Belt or Kuro Obi' his name in real life is Tatsuya Naka and he is one of the guys behind Japans Karate Association.

Even though the film starts off with Kei being the star, in the end when her Sensei has to rescue her. It's Yoshiaki that gets all the glories. Having already confronted a Destroyer at a riverside, the two battle within the river amongst the rapids, and what a brilliant and hard-hitting fight it is, with each blow landing its target with a resounding force.

From here on Yoshiaki must go to the Destroyer's hideout and confront the gang head-on, all members and the Big Boss are from Yoshiaki's past and they want revenge. It's Now Yoshiaki must infiltrate the building and come face to face with the Destroyers all at once.

After going down the route of asking for his Student's release and this failing, he has to fight the Destroyers head-on, and what a battle it is. The only weird thing is our once-powerful heroine Kei is reduced to a hopeless young kid who does barely any combat to help her Sensei, and apart from a couple of Blows it is left to Yoshiaki to entertain us.

In the end, Yoshiaki is triumphant and Rescues Kei. Back in the Dojo Kei is humbled by her Sensei who fought for her life, even more so when she realized when fighting in combat how the motions of the forms transformed into the fighting art that devastates the Destroyers. Starting afresh from White Belt she must go through her belts again to gain her Black Belt, but for the right reason and not to fight.

What I must say is Do Not listen or take heed of other reviews that hen pick at the film for having too many slow-mo scenes and repeat views of combative scenes. These are here to show you the technique and the power, and it does it to perfection.

Though short at 80 minutes, the film is a Blast to view and if you liked Kuro Obi you will love this. Rina Takeda is brilliant as the arrogant little girl who kicks Butt and each of the blows is so hard-hitting that they hurt to watch.

But then Don't take my word for it 'Check out the Outtakes at the end.

Rina Takeda was Born in 1991on the 15th June in Kanagawa Prefecture Japan,she is a Black Belt in Ryukyu Shorin-ryu Karate.

She Initially  auditioned for a place in a Japanese group,But did not get the place,then she lost out getting the lead in ''Shaolin Girl'' by Fuyuhiko Nishi, but later on Fuyuhiko Nishi left a message for to audition for a new fighting film he was doing and she ended up getting the role. Even though she had no acting experience.  The film was ''High Kick Girl'' .

Shotokan Master 7th dan / Actor / Martial Arts Instructor
Tatsuya Naka is a 7th dan Master of Shotokan Karate at the JKA.
He started Karate at Junior High School and is a full time Instructor at the JKA.
He is known across the globe due to his appearance in three Japanese Martial arts films.
Film Roles
Kuro-Obi - aka Black Belt - 2007
High Kick Girl - 2009
Karate Girl aka KG - 2011 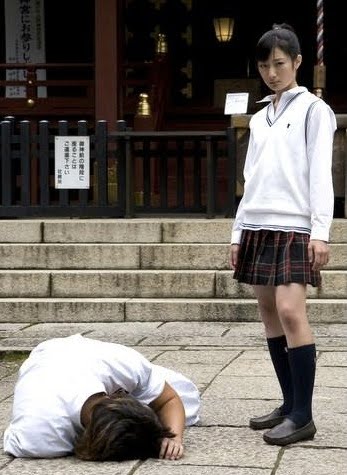 Rina Takeda as Kei  (above and below) Sensei and Student come together Kei Readies to Kick some Butt !