aka So Won – literal meaning - Wish

For our third screening viewed at the 8th London Korean Film Festival we chose to take in a film which from it's synopsis would seem out of context for the type of films for the site .

But as with last years festival and other film festivals we attend  , we choose to be diverse in our selection of films we attend.

But also from the synopsis it's also comes across as a film that I might even not ever have watched at all . But due to it starring Sol Kyung-Gu (Public Enemy) I thought I would give it a go.

Even though categorised a drama Lee Joon-IK has created a film which sends your emotions on a journey like they have never felt.

Though the story is a work of fiction it is based on true events though of course names and characters are not exactly the same as the true life counterparts.

But the basis for the story is that of a incident that happened in Korea and which happens everywhere else in the world to the despair of parents worldwide.

It follows the story of Hope a young eight year old girl who like any other eight year old enjoys playing and not so hot on doing homework. Also like kids of her age she has a innocent mind and can be easily cohered into doing or going somewhere she should not, especially when a adult is the one doing the cohering.

Like everyday Hope would walk to school ,normally with her school mates ,in particular Young -Suk ,the son of one of Doon Hong's work colleagues.

But when one rainy day Hope is running late Young Suk decides to leave with his friends to go to school .

Hope's mother Mi-Hee sends her on her way and tells her to keep to the main road. Which she does. Literally yards from the school gates Hope gets confronted by a man who asks if she can share her umbrella , you know the intentions of the man from viewing the film , before you know it it seems the whole world has fallen down around Hope as she lay on some cold dirty floor covered in blood reaching for her phone.

With Police alerted the school becomes a hunting ground for reporters as news of a child assault gets out, ,unknown to Hope's parents who get the news shortly after .

Arriving at the hospital the parents are confronted by the horrors of what has happened to their baby. Thing is this horror is relayed in such a way that as you the viewer are catapulted into this world where this young innocent girl lay on a hospital trolley barley recognisable to her parents due to the horrific injuries sustained from a harrowing sexual assault .

The film introduces you to this everyday family who by a pivot of life have there whole world change ,for the parents coming to terms with what has happened is harrowing enough ,but the police need more to go to catch the culprit.

Hope will take you on a journey where your emotions will go through the sadness for the girl and the parents who feel like giving up on life , to making you want to scream at the screen as you want to personally attack the culprit on screen ,but it also does something else in the same instance ,as at one moment your be so annoyed with anger or tearful with the horror of the incident that suddenly your be laughing , and it's something you might find at odds whilst watching such a film based on such events.

From the scenes of Hope having to identify the man that hurt her whilst still in intensive care to coming to terms with the fact that she now has a disability as a result of the attack .

But the film is also about giving Hope and her parents reason to carry on , it's about getting Hope through the ordeal and channelling her nightmares into becoming the girl she was.

It's here that we are introduced to a support group pioneer whose own life has been one of heartache who uses some unorthodox methods to get Hope interacting with her parents again .

It's these scenes that show how strong people can be ,that they can pick up the pieces and enjoy life again.

Of course things don't go as smoothly and the lawyer for the defendant puts forward that the attacker has a drink problem and does not remember doing anything , this could shorten his sentence due to diminished responsibility even though he is a previous offender who has just been released.

But there are other obstacles for Hope and her father , being that her attacker was a adult male ,Hope has fear of adult males, including being weary of her own father, it will be a battle that Dong Hoon will address by utilising some of the methods used by the support group ,but Dong takes it to a extreme to get the desired effect sometimes with quite hilarious results .

In the end this film is about coming through the hardships thrown at oneself . The family will learn this the hard way ,of course the suspect will get his day in court and the family will have to deal with the ordeal of that ,but the underlying message of the film seems to be that no matter how bad things get ,you can always make it better if you persist .

Most films dealing with this type of issue would leave you thinking negatively what ever the outcome would be , but somehow HOPE suddenly lifts all that tension and in it's final moments offers a peaceful feeling .

Hope is a film everyone should see as seeing that this eight year old girl could get through this ordeal gives hope to all who may find themselves facing hardships and realise that maybe hope is all you need.

After the screening we where lucky to have actor Sol Kyung -Gu on stage for a Q+A , it was interesting to see how he dealt with playing such a role compared to his harsher tough guy persona's. Also he mentioned that though they had no contact with the family prior to filming that the family had written letters after seeing the film to the director and actors thanking them for such a wonderful portrayal of the characters ,which Sol Kyung-Gu attested was a relief .

He also praised his young co-star Lee Re who played Hope ,saying even though she did not like the make up for her injuries in the film that as the story went on and they where less severe she was more comfortable playing the part and also said that the young actors and actresses are monitored closely so that nothing their doing is effecting them .

He also said that playing his own role did have at time have a negative effect on him but you have to remind yourself of who you are and that keeps you going.

Even though Sol Kyung -Gu had come to support director Kang Woo Suk who had six films showing at the festival he was taken back when he discovered they would be screening HOPE and even more so when they asked him to do a some Q+A's for the festival .

So if you want to have your emotions shaken and sent on a journey of not knowing where their heading then Hope is a film you must see.

Here are some photos from the Q&A with actor Sol Kyung-Gu after the screening. 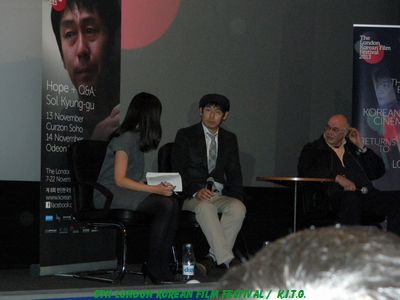