Concluding our visit to the 2014 Terracotta Far East Film Festival in London is this comedy from Japan , directed by first time film director Akira Nagai.

Now what’s amusing about the film Judge is it's story , based on the high flying antics of the TV advertisement world which we all know is full of dastardly deeds and under handed deals to secure a advertising deal.

Here the story focuses on a competiton in Snata Monica to see which commercials get nominated to be entered into a final to see who wins the commercial of the year.

With entrants from around the world competing in a competition which is as underhanded as the business it is representing. .

The film was shot for a modest amount and stars some of the top billing actors and actresses in Japan today, including Satoshi Tsumabuki, DenDen, Keiko Kitagawa and Kyoka Suzuki.

Add to this a international cast as well and then shoot the film for most part in Los Angeles and you have a film which has a lot of talent involved.

Now due to popular belief the cast and script was done and dusted prior to the director being chosen.

How do we know this well in attendance at Terracotta was director Akira Nagai who in fact replaced a previous associated director ( something that was not to be disclosed we find, oops!) , what's more Akira Nagai is a award winning director of commercials , so who better to direct such a film then someone who knows the subject matter better then most..

The film follows Kichiro Ota ( Satoshi Tsumabuki) who works at a advertising agency , he is chosen to go to the Santa Monica competition by his boss Otaki Ichiro who was supposed to attend but chooses not to due to having to promote a commercial made by one of the company's contractors which just happens to be a disaster .

Now being that Ota's name is similar to his boss his boss decides he is the best man for the job and then if all goes wrong he can be there to lay the blame on.

The film is a comical farce as Ota has one week to get ready and he even does not speak English , he has one week to learn some competent English , persuade a work colleague to pose as his wife or he will be taken for being gay of which there are a few attendees .

Ota will find himself amongst some of the best commercial maker who are all pushing their work to fellow advertisers for a vote in return for votes.

But of course there's always some big underhand dealings and when this is discovered , Ota and his work colleague and fake wife Hikari Ota decide to do something about it..

Judge is a fun filled hundred minutes or so with some comical and zany moments mixed in with the compulsory love interest and a sense of honour in a twist of fate for one of the entrants.

The hardest thing in cinema to do is make people laugh, to me comedy is a tough one , that I often stay clear of viewing many comedies at the cinema, there's nothing worse then attending a comedy screening only to find it does not connect with you .

But something told me see this film , maybe it was the great cast or just the fact that director Akira Nagai was attending for a Q & A and introduction. .

For whatever reason I was glad I did , Judge is a fun film with some quite funny moments which put a grin on my face for most part of the film , did I laugh with fits , well no but like I said comedy is a funny thing .

I don't think I have laughed in fits at a film since the 2013 Korean Film Festival and the screening of ''Boomerang Family'' ,which is a very special comedy with some quite dark undertones.

In a word ''Judge'' is refreshing. 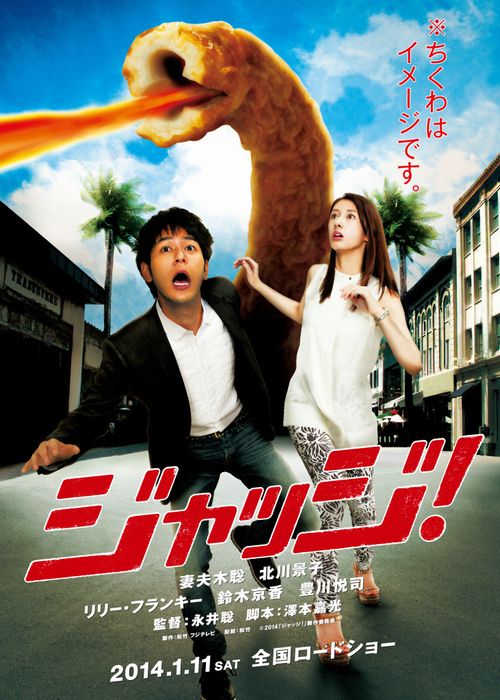 Stills from the film