All Hell is About to Break loose ,the moto read on the box ,i'm not quite sure if it did  ,but KASUMI NINJA on ATARI's ill fated JAGUAR was one of only a few games released for the system ,let alone fighting games.With stiff competition from SEGA and SONY  who had the likes of Tekken and Virtua Fighter even the SNES and Megadrive had Mortal Kombat and Killer Instinct.So ATARI released this to go up against them before they released Fight For Life which was to go up against the big 3D fighters.

You are the ninja out to stop the evil Ninja lord Gyaku.Graphically the games not bad for the time the Jaguar could move some graphics about and went for a Mortal Kombat look for the characters ,but the thing it lacked was a selection of foes only 8 in all plus Gyaku himself and in one player mode you always start as the ninja either Habaki or Senzo and as you fought your way through each opponent you could choose him if you wish for the next round if he was any good that is as only 3 or 4 of the characters are of any use ,even though the Scotsman ANGUS who's special move is a fire ball like street-fighter ,but lifts his kilt and fireball will shoot out i don't know where it's coming from but looks painful.

You also had a Gore factor which you could turn off if required ,the more Gore the more blood dropped from the two swords above which was each players health bar .In two player mode as with all these games there is some fun to be had and the combat system is quite easy to learn and your be pulling off good combo's in no time .So if a little shallow compared to others if you had a Jaguar this was a game to have and i still play it now ,it's a shame Atari's machine did not survive to see how it could compete .Play this and see if you can it's the only way to survive. 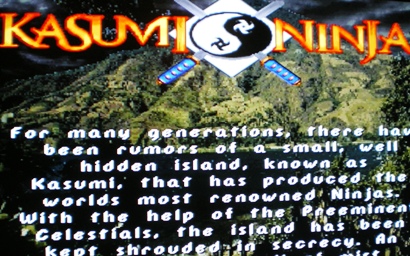 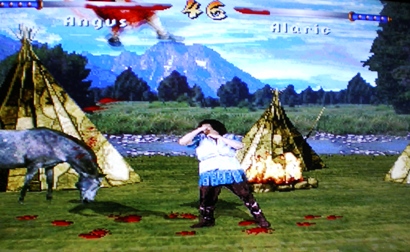 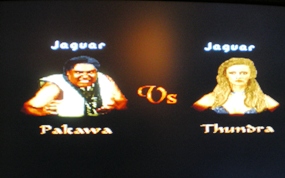 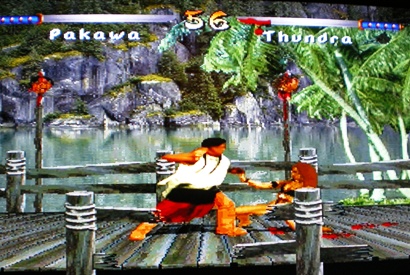 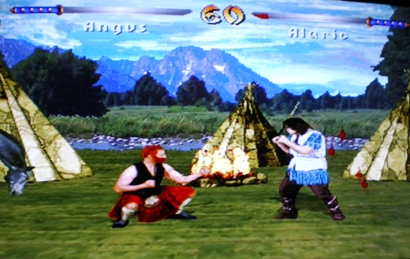 Habaki and Senzo - The Ninja Twins

Habaki is the eldest son (by ten minutes) of the Kiri-ga-kure family. At an early age the twin brothers were left in the care of the monks at the Dragon Cloud Temple. The two brothers were equally adept at the arts, both spiritually and physically. The Elders, noticing the great skill of the twins, offered them a chance to advance their arts by training as disciples under one of the Elders. Habaki was chosen by Kaioh and Senzo was chosen by Hiei. There have also been rumors of Gyaku taking a disciple, but no one has ever seen his student. During tournaments held at the Dragon Cloud Temple, the twins always cause a special interest because of their fierce competitiveness. The final match always comes down to the two brothers and each have won an equal number of championships over the years.

Chagi Nelson, five time world kickboxing champion, has never lost a professional bout. Even at the tender age of sixteen, Chagi KO'd his very first opponent in the first round. Chagi has trained all over the world, mixing different martial arts to develop a style all his own. Loud and obnoxious, Chagi has the ability to back up his big mouth with a dazzling display of speed and skill. Chagi currently owns a chain of successful kickboxing schools and convenience stores. He has also been seen in many popular action films such as: Under-seize; the Sci-Fi dance thriller the Lambadanator; and the most famous of his films, the Kickboxing Kidd Series I - XII. He can also be seen currently on TV's Trudger: Lodi Private Eye.

Pakawa is the chief of the Comanche fighting tribe, the Tu-Wee-Kah. For many years the Comanches lived in harmony with nature. When the colonists settled in, the Comanches welcomed them with open hearts. As time went on, the colonists grew greedy and started to forcefully take the land from the Comanches, with no respect for the Comanche life. Pakawa decided to train a group of elite warriors and called them the Tu-Wee-Kah. The Tu-Wee-Kah were the equivalent of the Green Berets of their time and they were the ones who were sent in first to stealthily assassinate the opposition and disable key positions, the rest of the tribe would then attack. Pakawa has been in many battles and he is proud of the many scalps that he has collected.

Thundra is the queen of a lost tribe of Amazon warriors. These warriors have taken a solemn oath to protect the rainforest from modern industrialists who wish to destroy it for their own profit. This is done by surgically sabotaging vital equipment and assassinating high ranking company officials. Thundra is their greatest warrior and as a result, she was appointed queen. She has trained her warriors in a fighting art handed down for generations. This art was taken directly from the forces of nature and those who have mastered this art can channel their inner power to imitate the fury of nature.

Alaric - King of the Goths

Some of history's most feared and ferocious warriors were the Goths. The Goths were a nomadic tribe from Northern Europe who would travel the continent in search of battles to join so that they might pillage and kill, their two greatest joys! The most ruthless of the Goths was their king, Alaric. Not only was he a renowned fighter, he was also a skillful tactician, leading his tribe to certain victory time and time again. One of his greatest accomplishments was his imaginative use of gunpowder in many dangerous and unique ways.

By day Danja Ureda is an assistant DA fighting in court to lock up criminals and keep the streets safe. By night, she is a vigilante. Danja grew up on the wrong side of the tracks, but she studied hard in school and became an exceptional student. As a result, she was persecuted by her classmates and had to quickly learn the laws of the street to survive. When Danja graduated from high school she was quickly offered multiple scholarships for her academic and athletic abilities. She worked hard in college, and studied self-defence and exotic weapons to increase her street fighting skills. She earned straight A's and was accepted to Harvard Law School, where she specialized in criminal law. Graduating at the top of her class, she was offered many prestigious positions, but decided to take a job with the District Attorney in the inner city instead. She soon realized how corrupt the justice system really was and decided to use her street fighting skills to take the law into her own hands. Danja has mixed the martial arts she learned in college with her streetfighting tactics and her personal preference for a weapon, the bolas. These bolas have been modified to administer her brutal brand of justice, giving them a real bang for their buck.

Angus MacGreggor is the blacksmith of his village Loch Katrine, as was his father, and his father's father before him. The constant pounding of hot iron has made Angus a burly man. Legend of Angus' strength quickly spread to the other clans of Scotland and as a result he was constantly challenged to tests of strength. These tests included wrestling, boxing, weight lifting, and the caber toss. Angus always won easily, but had high praise for his opponents, especially at their funerals. Angus soon discovered that he loved to brawl and became obsessed with fighting. Any pub Angus visited soon encountered a severe lack of both furnishings and patrons. Angus soon ran out of those who would challenge him, causing him much anger. This anger grew inside him every day, like a fire consuming his soul. Now Angus has dedicated his life to finding a worthy opponent, one who might be able to give him the fight of his life.

Lord Gyaku is the final boss of Kasumi Ninja. One of the eldest ninjas, Gyaku went berserk and killed all of the other elders on Kasumi island and proclaimed himself Lord of Kasumi Island. It is said that Gyaku is possessed by spirits from the Demon World. With the Dragon Cloud Temple also in his possession, Gyaku is planning his overthrow of the Island. The Dragon Cloud Temple is said to have a portal to the Demon World, and with such awesome power, Gyaku plans to rule not only Kasumi Island, but the world.