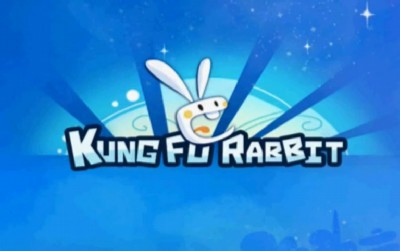 Kung Fu Rabbit is a 2d Platform game which involves you controlling a Kung Fu Rabbit who is out to rescue smaller Rabbits from the clutches of evil invaders. It consists of a couple of worlds each with a variety of levels ,as you progress through each level the next opens up ,there are also bonus levels which open up as you complete certain levels in the normal game.

The Game is a homage to all those early platform games like Mario Bros.

Now our hero does not have much in the way of a arsenal ,his main attack is to sneak up on his foes from behind and shout Yahhh! Which results in them vanishing. Doing this from the front does not work.

Now his foes are what I can only describe as Soot Gremlins. ( Think Studio Ghibli's My Neighbor Totoro) ,they seem to ooze this black substance which also sticks to walls and forms in small pools around the levels ,land in any of these pools and it's instant death. This forces you to restart from the beginning of the level.

Now you can earn points (Carrots) which can be used to buy power ups ,like being able to stomp on these gremlins heads to kill them. You can even buy checkpoint power ups to start of where you last died. There's a array to pick up and use in the store or Dojo as they call it. Though Dojo is Japanese and Kung Fu is Chinese there's a bit of continuity problems here.

Now if you complete the levels and worlds then you can try hardcore mode ,or even buy a upgrade to enter hardcore mode early on , all this does is make the same levels harder by including more Gremlins and ones that even shoot projectile gremlins at you ,it makes for a hectic affair I tell you that for sure .

Graphically the game is less in depth then say Toki Tori 2 or any of the Rayman 2d games. It has a more cartoon look to it's graphics ,if any of you remember Zool on the Atari and Amiga computers ,it reminded me graphically of that. Of course the worlds are not as open as in that game.

Now this game was originally released on IOS/Android and Windows from Indie developer CTools Studio and released by Bulkypix.

The game has won awards for it's IOS and Android formats, it's inclusion on the Nintendo Wii U eshop is a welcome one and being that the game can be purchased for little under Five Pounds ,it's really a no brain-er as to whether to purchase or not.

Bruno B is the K.I.T.G. Group of websites games writer . He covers all types of games across all genres and attends many gaming events ,

Platforms :  Windows , IOS,Android and Wii U