Legend of the Fist 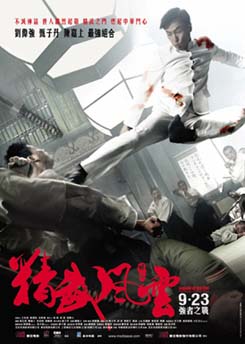 Legend of the Fist

Here we have another film dealing with the character of Chen Zhen , A fictional Chinese Hero which was originally depicted by the Great Late Bruce Lee in the Fist of Fury . Now the one thing with this character it was actually made for Bruce Lee , so there fore anyone portraying the character has a handful on their hands ,in that mimicking Bruce is not a easy thing to do and convince the audience.

Some years ago Jet Li was tasked with portraying the hero in the Remake of Fist of Fury ,Fist of Legend. Luckily Jet did a magnificent job with the aid of Yuen Woo Ping who was on hand for the action and Gordon Chan directing.

Also in the 90's Donnie Yen starred in a TV series of the Fist of Fury which ran for a while . I remember seeing this in part and was not overly enamoured by it , mainly because of the shooting of it and being TV did not have the time allotted to it in terms of shooting and quality.

Now it's 2011 and Donnie has reprised the role in a sequel to that series. Andrew Lau is directing and Gordon Chan producing with Donnie handling the fight action. Now Donnie Yen is probably at this time the biggest star in Martial arts cinema after his portrayal of Ip Man in the two films made and starring in great films like 14 Blades and Bodyguards and Assassins.

Now to Legend of the Fist , which has a good cast in the form of Anthony Wong and Shi Qu among others. The film stars with Chen ( Donnie Yen) after supposedly being shot after Fist of Fury ,getting to France to help the French fight the Germans as a labourer whoo helps the front line soldiers with ammo and such like .

It's after this term of service that Chen returns back to Shanghai under the name of one of his fallen Comrades .

Arriving back under the name of Qi Tianyuan he gets involved with a underground resistance to stop the Japanese Invading China . He also befriends a night club owner Liu Yutain ( Anthony Wong) who also is a patriot of China.

Working in the club is a singer played by Shi Qi ,named Kiki . Chen falls for her . They later find out that the Japanese are going to assassinate a Chinese General and push the blame on another Chinese General as to make it easier for Japan to invade .

Chen plans to save the general and put a stop to Japan taking over the whole of China.

Now it just so happens that a film is playing at the local pictures called 'The Masked Avenger '' and it also happens that a in a nearby window is a costume of that character . Suddenly the costume has gone and a masked man is fighting the Japanese hit men and sending them flying. In fact this masked man is nearly flying in his very cheap looking plastic outfit. Which resembles the Black Mask outfit which was based on the Kato look.

But don't worry it's Chen he has become a super Hero , Now I am confused,it was a film about Chen Zhen I was watching , not Kato returns. No it was Chen he's taken off the mask.

After thier plan failing the Japanese send out a hit list of all Resistant members and Sympathisers ,as people are taken killed and tortured it seems Chen has stirred up bad feelings with the Japanese. It's now a race of who can get to the targets first , the Japanese hit squad or Chen ( as the masked Avenger ).

Now the Japanese secret agency led by Hongdou Dojo master Chikaraishi is suspicious of Chen and visits the club ,his suspicions are realized when he compares a photo of the real Qi Tianyuan ( whom Kiki Gave him) with Chen and sees it's not him.

Of course by now Chen Knows Kiki is a spy and warns her to keep away and leave. But also at this time the Japanese start to distrust Kiki and get her to kill the Daughter of General Zeng ,who happens to be one of her friends.

Now all hell is breaking lose on the streets as targets are assassinated and Chen arrives just to late to save his comrades at the Shanghai Times .

Chen goes on a revenge spree but the Japanese Capture him one night and torture him, His friends stage a raid on the Japanese headquarters ,blasting everything to bits. Chikaraishi lets Chen go after telling him he will fight him at the dojo.

After being tortured they drop Chen in the street ,he lay comatose for some days .

Now the Japanese are furious ,they track down the culprits of the raid and kill them ,when Chen recovers and finds out he prepares himself for the showdown at Hongdou Dojo.

When he arrives he finds they have two of his friends who they kill in front of him ,this enrages Chen who now battles the occupants of the dojo to get to Chikaraishi . When he does the final duel will be brutal and hard.

Once defeated as Chikaraishi lay ,Chen has achieved his goal and the last thing you see is the image of of the masked Chen on the rooftops.

So there you go, Donnie Yen once again turns in a Stella performance in the action stakes. But and there is a but. The character of Chen is that of Bruce Lee and anyone playing the role has to play the character as Bruce Would have done to make Chen recognizable to viewers.

I must admit I had a bit of a problem with Donnie playing the role though at first I thought ,, no give it a chance and as it went on I grew to him as Chen. But then the Kato mask came out and the plastic suit and I was left feeling let down slightly.

What happened to the character of Chen being a man who could disguise himself as any one to blend in and attain what he wants. Think of Bruce as the Telephone engineer or the Old newspaper seller. If Chen had taken on the role of normal people to get to the Japanese and assassinate them then it would have played true to the original story.

Secondly the one thing that should have entertained was the fighting ,but the cutting of the action scenes ruined many action scenes with camera shots to close to the action and unable to see what’s going on. Some may tell me to get a bigger TV . BUT HEY I'm watching this on a 8ft screen and if you can not see it on that then it's Not shot right.

I so wanted to like this in the same vain as Ip Man or 14 Blades but I must say I was let down ,though the film is not a disaster it pales in comparison to many . Maybe it's impossible to make one brilliant film after another , but until this I can not think of a film Donnie has made that I did not think was great in the last Ten Years.

I hope his film of the Monkey King brings him back doing what he does best . But then Donnie is not to blame solely ,Andrew Lau must also take some of the credit , With a film that looks sumptuous with lavish sets it's hard to believe this was the end result.