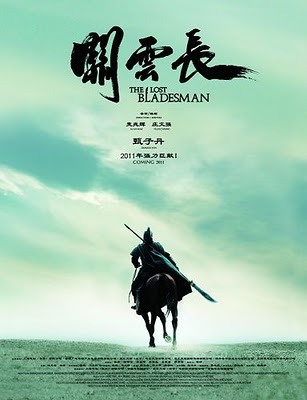 Donnie Yen seems to be working overtime at the present, maybe it's because he said he would retire from starring in films when he reached fifty years of age.

Here he plays Guan Yu a general who in the historical novel ''Romance of the Three Kingdoms'' crossed five passes and slay six generals in the process.

Guan served Liu Bei his sworn brother .But due to being seperated from him he ended up serving Liu Bei's enemy Cao Cao.

In contrast to the story told in John Woo's Red Cliff films ,Cao Cao comes off not as evil here ,though his allegiance to the Emperor and his ways put the people in turmoil .

After defeating Yan Liang at the Battle of Baima ,Cao Cao requested the Emperor that Guan should be made a Lieutenant General .But as Yan Liang had served Yuan Shao ,who in turn was a friend of Liu Bei's and was protecting his family.

Cao Cao ends up taking Liu Bei's future wife as a prisoner. Guan requests that Cao Cao should release Liu Bei's family and that he should take her to back, (this is after he receives word of Lui Bei's whereabouts) . After much deliberation Cao Cao agrees. But the truth be told Cao Cao's people thinks this is a bad idea and plot to stop Guan from carrying out his task.

This sets up the film for some great battles as Guan is ambushed as he travels to take the young girl home. Guan's first encounter is at the borders of the city ,when he meets resistance from Cao Cao's men (all without the knowledge of Cao Cao himself) as he strives to protect the young lady he encounters a adversary of great ability ( Andy On Chi Kit) ,fighting in a narrow alley the two clash as Guan swings his trusty bladed spear .

After the adversaries defeat news gets out about the incident to the other Generals which are intent on stopping Guan as they believe his reconciliation with Lui Bei will prove a disaster for them.

The Three Kingdom stories are vast and quite complex ,but this small piece of the story is told well and though the outcome is known to those that know the story ,it still provides brilliant entertainment.

With Guan coming up against previous foes and comrades who for a price will risk their lives and betray any common decency to get to Guan. There are some quite eerie scenes and one which puts Cai Cao at heads with the Emperor .

For me the film was a breath of fresh air ,though I did view the Region 6 release as opposed to the Region 3 one ( Some key subtitles in the Hong Kong release are not evident in the China Version ,mainly intro stories and ending Epilogues).

I was glad to see Donnie Yen in such a role after I was disappointed with ''Legend of the Fist''.

It was quite lucky though as the Directors originally wanted Zhang Tielin for the role of Guan but he was more interested in doing the new Water Margin film which he got offered to,so he went with that. They then asked Donnie if he would do the role ,but Donnie felt he could not do justice to the role and turned it down , returning to Donnie once more they said the role could highlight him as Great actor and not just a martial arts star. Convincing him he could pull it off ,Donnie Yen signed and the rest is history.

I for one think this is Donnie's finest moment as he gets to shine in the fight department (of which he was the fight Choreographer) and in the dramatized scenes to. I do feel Donnie is well suited to playing this type of role , I loved his performance in the ''14 Blades'' .

Jackie Chan has proved over the years that he is a great actor in films like Shinjuku and Little Big Soldier and the more recent Shaolin. Here's hoping that Donnie's next film is as memorizing as this was ( but then it should be as I think it's the Monkey King story).