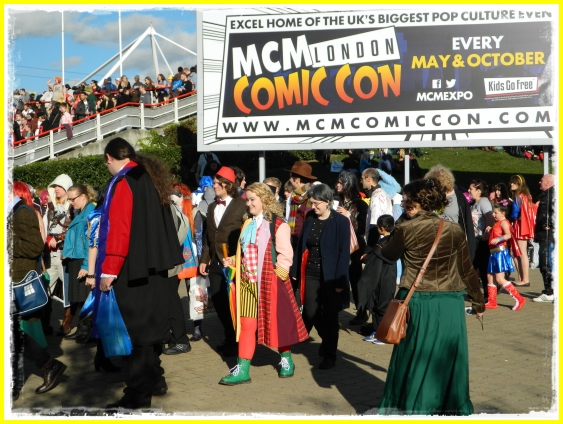 Crowds flock to Excel for the UK's biggest Comic Con

The Big one returns to London , yes MCM Comic Con October at London's Excel center is the UK largest Comic Con , apart from the stars and the massive seller stalls of which there are many , the October show also plays host to many of the forthcoming video games releasing this season and beyond.

Normally we attend a couple of days out of the three ,but due to other commitments we could only attend on the Saturday ,so we made sure we got to encounter and see everything possible within the time we had.

Of course cosplay is a huge part of MCM and I don't think your find as many people in cosplay at any other event in the UK. At times whilst walking around it seems like every other person is in some form of cosplay ,whether it be a full outfit or a funny hat or mask. 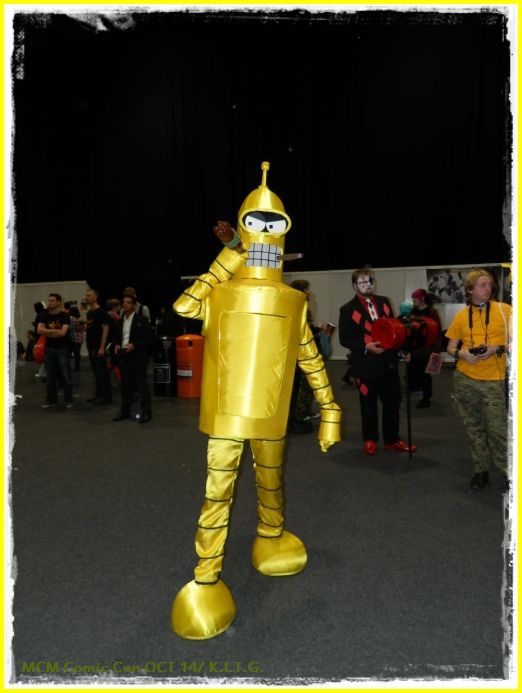 A Impressive Bender from Futurama Cosplay

Also the October show in London plays host to the EuroCosplay Championship with entrants from more then twenty countries and the event is streamed live around the world .

Games wise at the show was a varied selection of titles for game fans to indulge in, many of which featured at the September EGX show at Earls Court.

Sony brought Drive Club for PS4 which proved to be a popular title. Of course the massive online multi-player title ''Destiny'' from Bungie was also attracting large crowds even though the title has been out to buy for around eight weeks already. 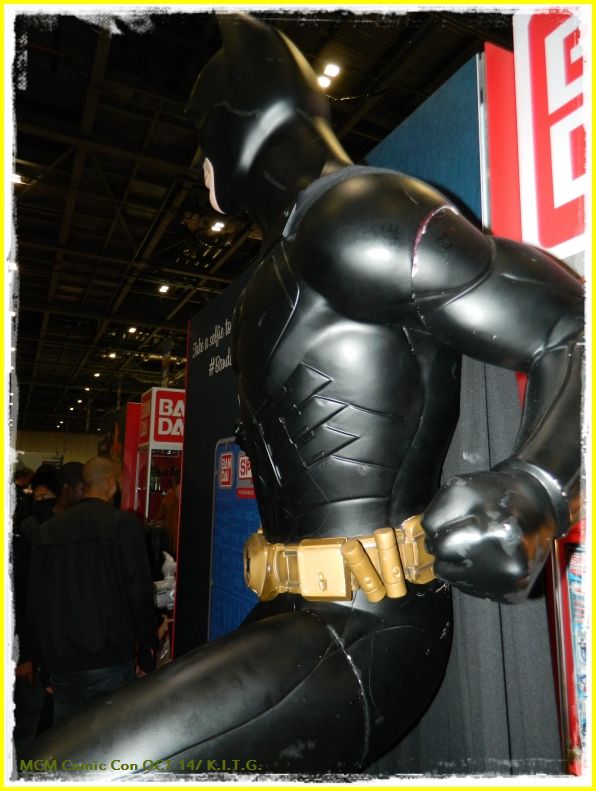 Looking very polished like all the Lego games ,it looks certain that they have another seller on there hands. It releases across all major formats this November .

Having played the first game on Xbox 360 I was lucky to spot Game selling the second game ( Lego Batman 2 'DC Superheroes ) for Wii U for a bargain £4.99 . Well having the console I could not resist to snap up the title , and have been battling crime in Gotham for the past couple of nights.

Other games showing included the forthcoming Project Cars from Bandai Namco which releases across PC,PS4,Xbox One and Wii U in early 2015, having been pushed back from it's planned November release .

Tecmo Koei brought Dead or Alive 5 Last Round ,which releases in the New Year on PS4,Xbox One at retail and PS3 and 360 as a digital download. The other Tecmo Koei title was Samurai Warriors 4 releasing across all current Play-station formats, the popular Musou game has garnered high scores in Japan and released the weekend of the show in Europe. 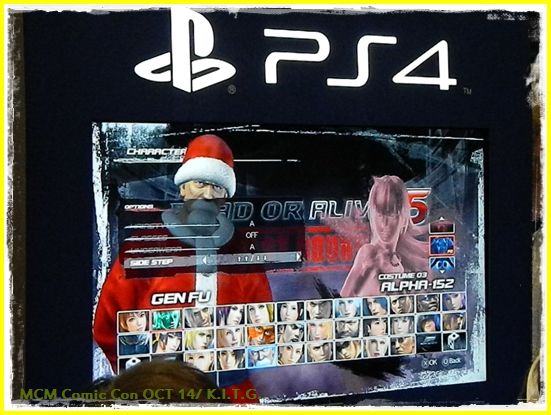 A impressive roster of characters for DOA5 Last Round

Ubisoft brought their Assassins Creed series ,but I must admit i'm finding the series becoming one of those never changing yearly money churners for the company, would have liked to see the Wii U version of Watch Dogs shown as it releases in November finally . Maybe it's not all that , games not shown are a bad sign in my opinion ,that maybe the makers have no faith in their title. 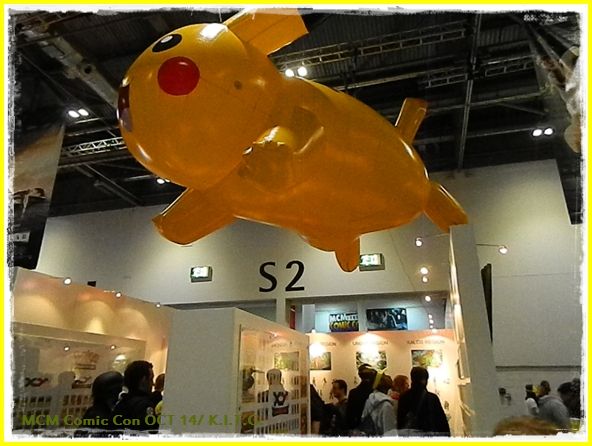 A disappointing no show was Nintendo , so no Wii U products on show, maybe they had spent all their advertising budget at EGX and Hyper Japan in July where they had huge stands.

Nintendo's Pokemon company was on hand though for those into the popular hand held gaming series . 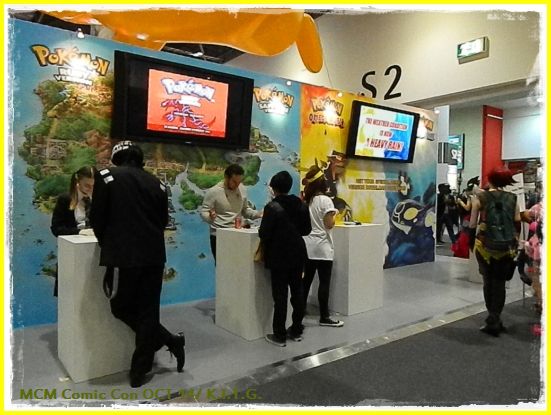 Capcom showed Monster Hunter 4 on Nintendo 3DS ,which has done some mega sales in the East.

So from a gaming point of view MCM visitors could easily get there fill of gaming.

The stalls proved the busiest places to wander where you could buy all sorts of goodies from Plushie toys,bags,Key rings,DVD's and game bargains from the likes of CEX,Game and Zavvi.

The other part of MCM is the exclusive interviews with film and TV stars and directors and producers.

On the Friday they had Daniel Radcliffe promoting his new film Horns , but we just could not get there on that day.

The Power Rangers featured at the show with a panel with the stars of the show. As did the cast and crew members of Street Fighter Assassins Fist returning to the show after their May appearance as they promoted the DVD and Bluray release of the series ,released in the UK by Manga Entertainment. 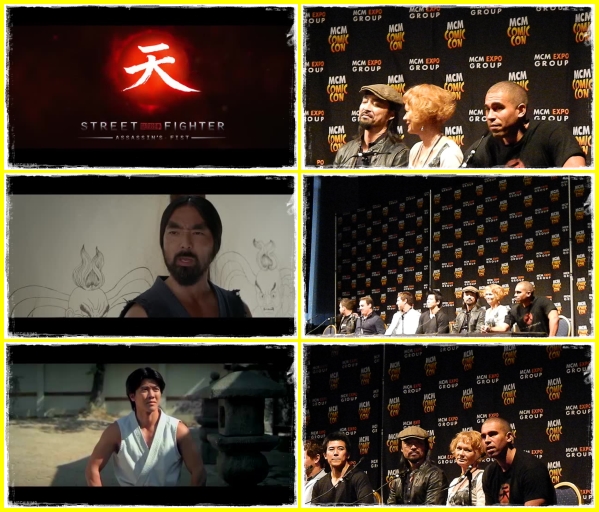 Joey Ansah the Director ,Writer and actor who plays the Character Akuma was joined by Akira Koeiyama ( Gouken) who where at the May MCM show, where we met Joey,Akira and Christian Howard at the free signing they did .

Now the as a webs series it consists of twelve episodes these have all been accumulated into DVD /Bluray release which also features many extras and a epilogue of fifteen minutes , which answers many questions of the series. This was never available for web viewers and features exclusive to the DVD / Bluray release.

Of course being at the panel Q&A we where also privy to the Epilogue on the big screen ,which tied up any loose ends to the series.

Also the DVD / Bluray was available at the show to buy prior to it's forthcoming release at a slightly reduced price. 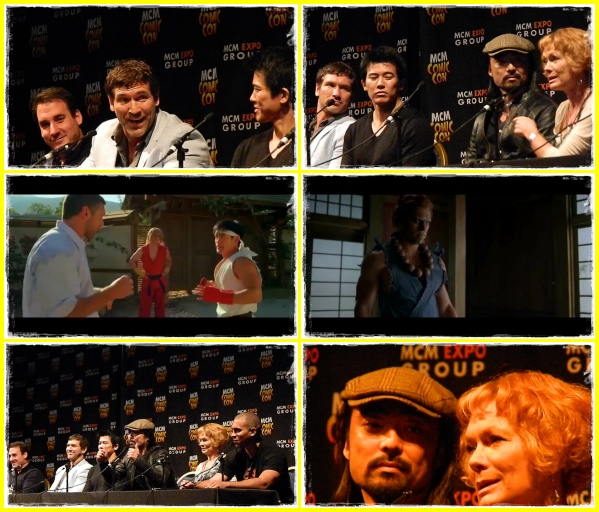 The other big revelation is that Capcom have given the go ahead to a second part to the series entitled The World Warrior to maybe be released late 2015,early 2016.

We can not wait as the series is truly amazing .

Now lucky enough for October the weather was pretty good on Saturday with it being dry and bright and sunny periods outside and not to cold at times.

This of course gave the cosplayers a chance to get up to there shenanigans outside for meet ups, photos and general parading. . 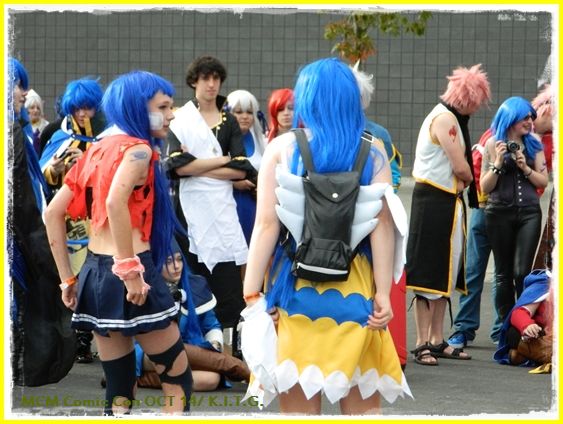 It was quite a site as the surrounding area around the Excel and the waterfront was awash with colour with hundreds of people dressed as their favourite characters . It was a great opportunity to get some photos of the cosplayers . 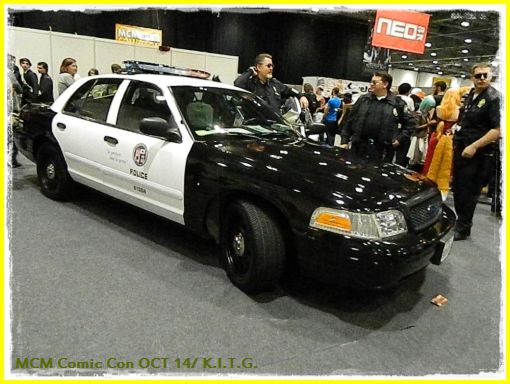 Now with record numbers attending the show over the weekend , apparently 110'000 according to MCM 's official site. I wondered how many where in cosplay and if in the future if there was a way of counting how many turned up in cosplay.

Maybe they should have a daily count in the future where all the cosplayers enter a separate hall at say 4pm each day and there counted to find the number of visitors in cosplay. It would be interesting to know how many turn up in costume . 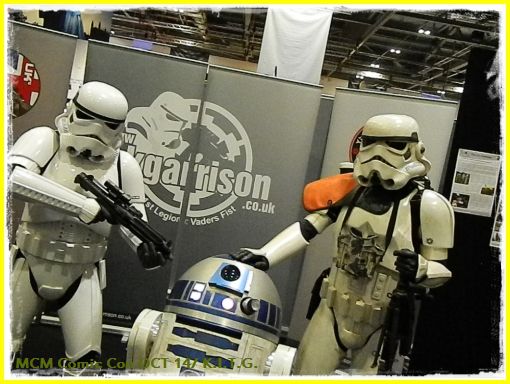 Now for the Eurocosplay Championship , which in all honesty deserves a separate article ,which is exactly what will be happening on our sister site' Cosplay Heroes'.

Taking place at the end of the day on Saturday ,the event was supposed to kick of at 5pm but due to the previous event in theatre A taking a bit longer we did not get in till around 5.20pm.

Now the Eurocosplay championship is a international event with entrants from around Europe.

Once in position ,choosing to take a seat by the stage on the floor as many of the previous events viewers where not going anywhere and being at the back I would have just got pictures of peoples heads. 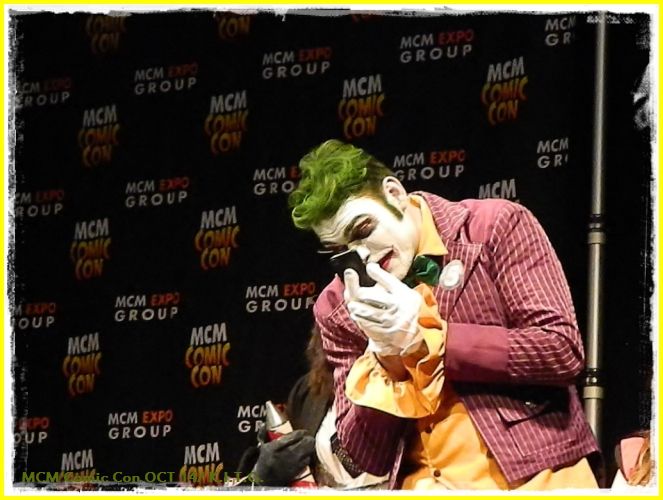 With dynamic lighting effects and smoke machines the event was set to be quite mega , but what I did not realise was how huge a show it was and how long. .. There where some amazing entrants from the UK,Romania,Slovakia,Lithuania,France and other countries.

Whilst they got ready to get the show started , our hosts entertained the audience with free gifts from some of the shows sponsors .

Once again MCM Comic Con proved they are the UK's premier Pop culture event. I thought the way entrance and re-entry was bit more organised this October with a bit more ease of where you could re-enter if you wanted to go back to your car. You know to load up any goodies you may have bought.

Of course it was easy for myself as I did not have to brave any massive queues due to getting accepted for a Press Pass this October.

Which we thank MCM group and Gary Burns for.

For more on the cosplay side of things shoot over to our sister site Cosplay heroes as we take a in-depth look at the cosplay and EuroCosplay Championship final and awards at MCM October 2014.

Next up for the K.I.T.G. Team in the cosplay and culture events is the forthcoming Hyper Japan Christmas Market show where we will be attending all three days if no other surprises happen.

For more from MCM this year , November 22nd and 23rd sees the MCM Birmingham Comic Con return to the NEC . Where not sure if we can attend this event ,but if you need another pop culture fix before Christmas then there the dates folks.

You can visit the MCM site here. 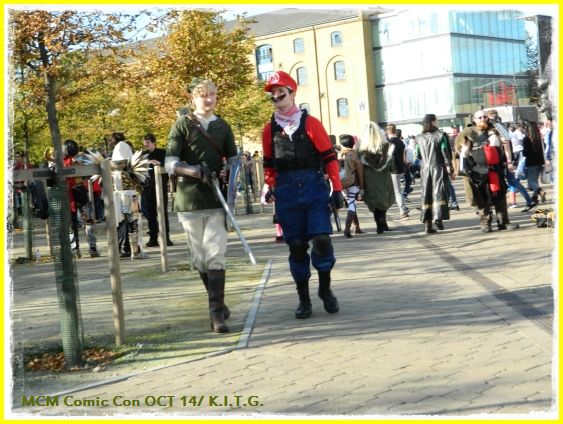 Link and Mario looking for the Nintendo stand, was it outside? 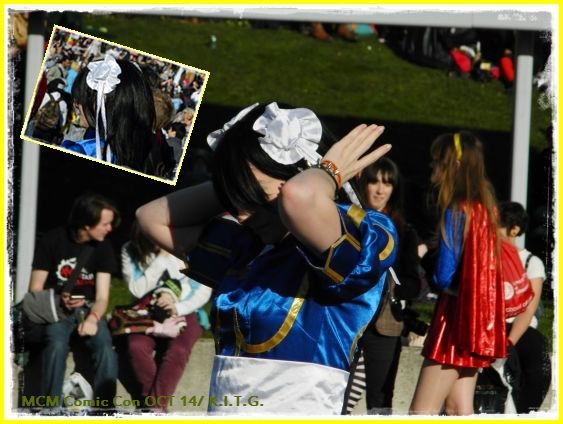 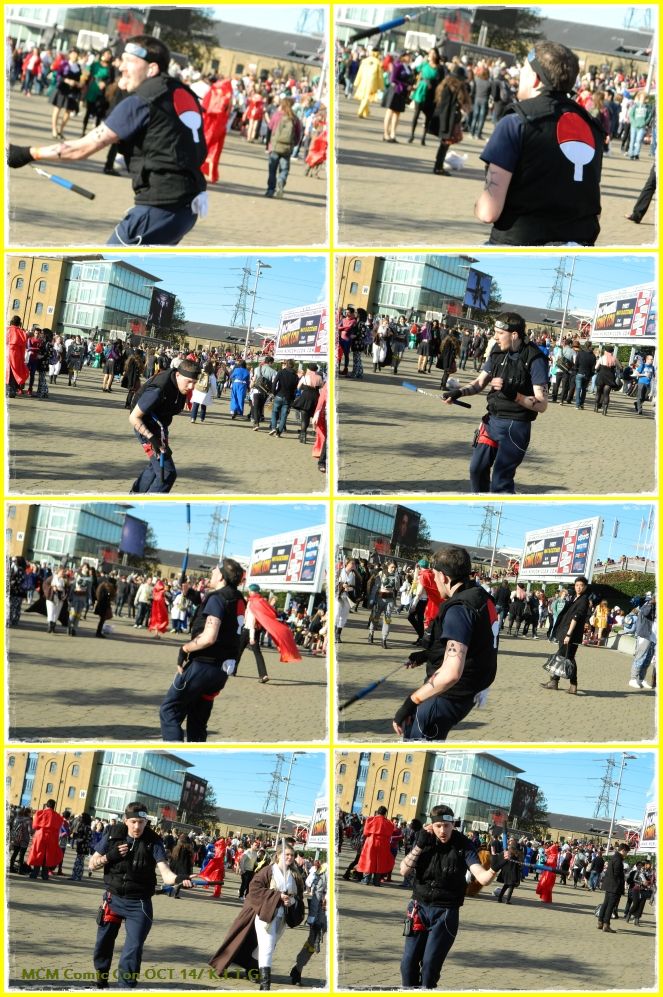 Naruto guy busting some moves with his Nunchaku 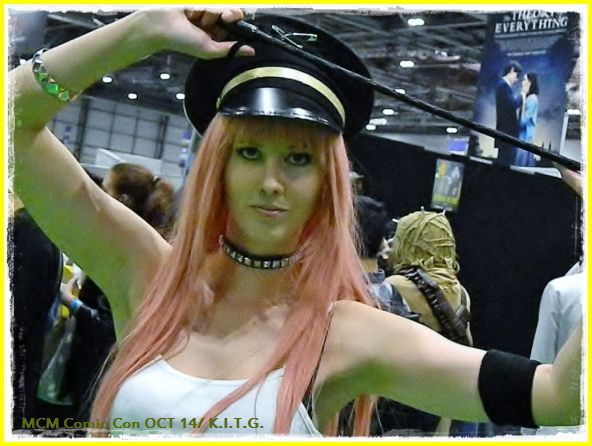 I promise to behave myself , honest!

Yep ' this will scare the kiddies

Even Toyota got in on the act , having commissioned  Manga artist Sonia Leong to write a new  adventure starring the little car

The suns out and the boats come in - All Aboard

How To Train Your Dragon 2

Chang'e Faerie of the Moon

See Part two to this feature on Cosplay Heroes

Visit Cosplay Heroes to see our second part to this feature

Selection of photos from the October show that i did not use on site ,Don't forget the site feature has lots more photos from the event.http://www.cosplayheroes.co.uk/mcmcomiccon2014octs.htm