Crowds Flock to MCM eXpo as Heat takes Hold
After some of the nastiest weather ,the weekend of the 25th -27th of May turned out to be the Hottest of the year. And it just so happened to be the weekend of the MCM EXPO at London's Excel centre in the heart of London's Docklands.
One of many shows organized by the MCM group each year and the first of the two London shows (with the second being in October), With previews starting on the Friday and the main show kicking of on the Saturday going through to Sunday.
I new that after last years October show (the first K.I.T.G. had attended) that it was a popular show ,but nothing could prepare me for the crowds that awaited when I arrived on the Saturday. The hall were tickets where purchased was packed to the gills with people lining up to purchase tickets.
Of course many come in Cosplay as their favorite character of Anime ,Film or Game.,this makes queuing for tickets a show in it self as you spot the various characters from different media. It also makes for a upbeat feeling before you get into the show.
Once you have purchased your ticket (which was speedy for the amount of people ) getting into the main show hall is a tight fit ,with many queuing to play the many video-games on show from the likes of Namco,Sega,Tecmo Koei and Nintendo.
Gamers get to Grips with Dynasty Warriors 3 on the Tecmo Koei stand
To be honest the amount of games on show where not as great as the October show as many new releases are showcased the end of the year.
But I did get to embark on the new Dead or Alive 5 which was pretty cool ,but not setting any new benchmarks.
Gamespot had a stand and showcased some games and held competitions for those who dared to compete.
There was a Cosplay area where people could store props ,changing rooms for those who dared not travel on the bus or train in full costume ,plus a stage where cos-parades took place and various other events. 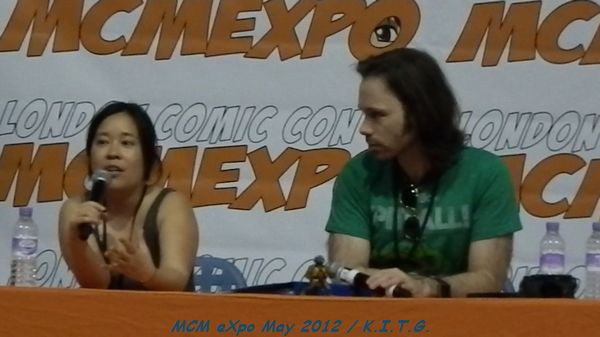 In the film department there where to Theater areas where interviews where held with various stars of film and TV and Anime. Among the stars attending where Elvira,Stephanie Sheh ,Michael Sinterniklass and Danny DeVito who I managed to get seated for on the Sunday .
Danny DeVito was there promoting a new Animation from Universal Called The Lorax.
Giving a great interview and insights to his new ventures he held the audience captive for his time on stage and even went into Penguin mode from his turn in the Batman film.
Now one thing there is at the MCM shows is plenty of goodies to buy ,from DVD,Games,Plush toys,bags and posters and more ,it's definitely not a place to be without your credit card (or maybe it is if you want to save money) it's quite easy to spend a small fortune especially if you drove to the venue and can fill up your car.
Outside the venue the many cos-players and party goers where having a good time in the sun with live music and tunes being spun by DJ's to keep the crowds partying.
Sunday was not as busy as the Saturday ,but the numbers at the show where still high ,but it was easier to navigate the show.
At K.I.T.G where pleased to have attended the show which has now become a regular part of the events we will cover each year.
We look forward to seeing everyone at the October show which last year also incorporated the Memorabilia show in another hall ,making the show twice the size .
MCM is a real fun day for all the family and you never know you may get to brush shoulders with a Hollywood star or two. And if your brave come in costume to become part of the show as cos-players can quite easily outnumber the attendees in civies. And with attendees so friendly your soon become part of a new family .So live life and edge out of your comfort zone and become your inner hero ….
See you all next time....
Photo's

Check out the COSPLAY page for more photo's