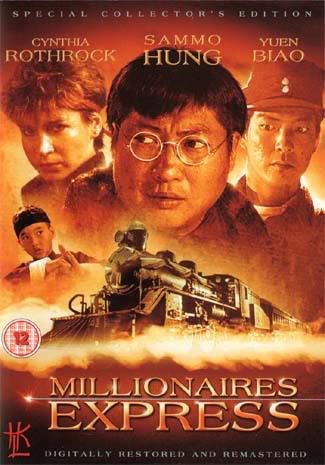 Millionaires Express (Shanghai Express in some regions) is a film Starring and Directed by Sammo Hung that is a genre defining film in that when made it played host to having most of Hong Kong's-leading lights appear in it.

Now with the recent fashion in Hollywood for films to star two ,three or in the Case of ''The Expendables'' or the recent ''Machete'' 7,8,or more big name stars .Not only does this give a film many options to where it may go ,it also pulls in audiences who wish to see their favorite star .

In the 80's and 90's in Hong Kong this was a common place event ,just look at the collaborations of Jackie,Sammo and Yuen Biao. How successful where they?.

With This film Sammo took it to another level ,the film pays host to most of the big names in Hong Kong Cinema from that era.Add to this some stars from Japan and the USA and you have a film to define film making in one fell swoop.What's more surprising is that Sammo did not do this once ,look at ''Eastern Condors'' or Fortune Code''.And more recently the IP-Man films and Bodyguards and Assassins did the same.

Sammo plays one Ching Fong-Tin a swindler who on the run from the law wants to right a wrong ,But at the same time make some cash.The film opens with Tin robbing a load of Russian Soldiers on a military exorcise ,Playing dead the soldiers are relieved  of their goods.

Of course Tin is Captured and forced to dance as a woman for the sex starved soldiers.(and they think Tin can fuel there cravings! Crazy or What?).

Escaping the Russians he is only again captured by Bounty hunter Fook Loi. who wants to collect the reward on his head.Forced to sit in his under pants in thick snow and ice ,and suck on frozen coffee.After some deliberations Fook leads Tin away to collect his reward but at a opportune moment Tin escapes when the two tumble down a mountain in to a large Snow Ball ( Whats Funny is when they break out and you can see it's poly-foam ball ,must be warm inside).

Now in a town in called Han Shui there is a small community of people who live of the land and have their own Bank,security and Mayor.When the security officers decide to Rob the Bank by setting a fire as a diversion ,the town folk are left penniless ,The fire chief Tsao Cheuk Kin is appointed new Security officer and his fire men as officers to help him try and retrieve the lost money.

At this moment Tin arrives in Town with a gaggle of girls ,he has acquired a local building he plans to turn in to a hotel (and Casino not yet known by the towns folk).

Now Tin has a history with the town (it's his hometown) he had swindled the towns folk and his presence is not welcome.Security officer Kin decides his men should keep a eye on him and see what he's up to.

Well his plan is to make a train full of influential and wealthy people on their way from Shanghai to stop at the town and stay in the hotel and use the casino with the help of his girls as hostesses.

But other parties have ideas for the train as well ,namely the ex-security officers who have lost their money ,plan to rob the train ,on the train are a band of gangsters who are following a group of Japanese officials who have a map for the Terracotta army location.,they plan to stop the train with help from bandits outside and them selves inside.

So when Tin does get to blow up the tracks he unleashes on the town ,not a influx of wealth and spending which he palnned ,but a crime wave form all angles ,where the towns people will have to come to gether to win the outcome .

With so much going on the film briskly moves at a pace that keeps the mind thinking and laughing at the same time.From the shenanigans  of the ex-Security officers who try and rob the train on horse back while wearing magnets so they may attach themselves to the train.(this scene will have you in stitches as Lam Ching Ying and Eric Tsang play off one another).

Then we have the character of Richard Ng who is having affair behind his wife's back with a beautiful young woman ,who also is on the train ,he constantly makes up excuses to go and see her for a fleeting moment.The scenes of him Jumping across the trains carriages roof tops is fun to watch and brilliantly executed.In one such scene he gets lassoed around his neck by one of the train robbers trying to board the train (it's so funny and magical at the same time).

There are some top fight scenes as well as Sammo and Yuen Biao give us a display of their ability in some breathtaking action shots,in one Kin (Yuen Biao) rescues a lady from a burning building then jumps off the roof and and lands on the ground on his feet in one shot and it's 3 floors high.In a other Kin Battles Tin as Kin tries to stop Tin blowing the train tracks ,the martial artistry on show is groundbreaking footage.

But the real fun begins once the train is brought to a halt and the people are led to the town by Tin.The gangsters are keeping a eye on the Japanese ,the robbers who are in jail now try and escape ,Tin is even arrested by Kin and put in jail.With help form his young ladies they devise a plan to free him and let him escape.But feeling sorry for his girls and the town he returns only to find  all hell has broken  lose when the Bandits helping the gangsters show up and take the town,imprisoning everyone and looting and having a party.

With the help of Tin he frees Kin and the girls and everyone else ,Now they will take the fight to the crooks.With the aid of Fook Loi's Gatling gun they disperse the crowds of bandits whilst the others create diversions.

What we have now are some of the finest fight scenes ever put on film.We have the likes of Hwang Jang Lee pulling of some amazing action as  one of the Japanese Samurai along with Yukari Oshima and Yasuaki Kurata.The fight between Yasuaki Kurata and Richard Norton is excellent and fun with some painful looking moments.Tin (Sammo) puts on his Bruce Lee impersonation as he goes up against the female Bandit (Cynthia Rothrock) in a fight so famous now amongst fans and Aficionados that it deserves a place in a book of Great action scenes (maybe i should write on).

Yukari Oshima rolls and leaps around like she could fly and with sword in hand dispatches many bad guys.Yuen Biao has a classic fight of acrobatic proportions with the mighty Dick Wei some floors up on a balcony which is so stunning to watch your be reaching for the rewind button to confirm what you have just seen.

In the end the bad guys will lose ,and Tin will be hailed a hero amongst the towns folk.The Japanese will have to leave with out their Map as the treasure of the Terracotta Army belongs to China and our Chinese friends are not letting them get away with it.

But one thing for sure ,when you view this film for the first time ,you will be so busy looking at the action that you will miss the cast of so many famous people .Even at the beginning before the train has left Shanghai we are treated to a appearance by the great late Shih Kien (Mr,Han in Enter the Dragon) and Jimmy Wang Yu ( Chinese Boxer) as two masters of Kung Fu ,that you will know ,along with their two young sons ,all they do is fight each other through out the journey.

Corey Yuen Kwei turns up as one of the Gangsters,Look how big he is now. he directs most of Jet Li's and Jason Statham's films in the states.then look out for Yuen Wah (Dragons Forever) and Wu Ma who has starred and directed so many films appearing as one of the Ex-Security officers.The list goes on.

Millionaires Express is a film to convert many who shun Hong Kong Action as it showcases a top story brilliantly shot and featuring Breathtaking fight and Action scenes and a big helping of classic Comedy in the vain of Buster Keaton and Harold Lloyd .I suppose the only face missing from this Magnum Opus of Sammo's was Jackie Chan.Shame really as it would have completed the cast of to a ''T''.

but in the end there's only one score this film can get ,and it's a resounding .