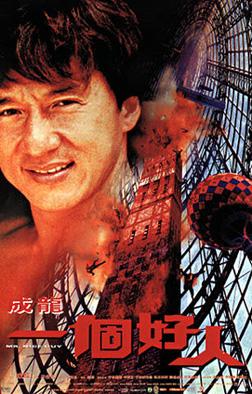 Yes a look at another Jackie Flick but one which saw Jackie team up with his classmate Sammo Hung who directed the film.Now many say that Jackie never looks better then when Sammo is directing him and i must say if you watch Dragons Forever / First Mission or Wheals On Meals they prove the saying.

With 'Mr,Nice Guy this proves true to .Now this is the first film Sammo had directed starring Jackie where the film is shot in English sync sound.Though there are snippets of Chinese in the film to.

Jackie plays 'Jackie ' a celebrity  TV chef who does shows and video's ,when he accidentally runs in to trouble in the shape of Diana a TV presenter who does news features on life .criminal activity and such like .Diana having just been caught filming a drug deal by local gangster Giancarlo and rival gangs is on the run with the footage  when she runs in to Jackie and a commotion starts when Giancarlo's men mistake Jackie as a accomplice.

With the aid of Jackie ,Diana manages to get away ,but to no avail as the crooks track her down ,Jackie comes to her rescue in his Car and the two escape..

Back at Jackie's house he explains to his friends what happened and how crazy it was.Diana mean while thinking she has prime footage of a major crime infact she has a video of cooking from Jackie (Yep the tape has got mixed up in Jackie's car)

Meanwhile Jackie's having friends for  dinner and a couple of young kids find the tape ,play it and end up keeping it ( A policemen kid to .Can't trust anyone nowadays).

The  criminals track Diana down ,and try and detain her when she fails to hand over the tape ,she says Jackie must have it.Now the next day ( yes this happens in one day) Jackie is picking up his girlfriend Miki at the airport.Later on Jackie is doing a show in a Shopping mall with audience participation ,and when the gangsters show up disturbing the show ,assaulting his fellow chef friend and demanding tapes.This scene sets us up for a classic Chan chase ,fight and stunt fest that will spellbind you .

In fact with so much going on with Jackie fighting Giancarlo's men ,trying to protect Miki all hell breaks loose as the mall is sent in to a war-zone with fights going on everywhere.Escaping out side they take refuge in a horse drawn carriage they borrow ( if you call horse carriage Jacking borrowing) This again sets us up for fights on a moving carriage  while Miki hangs on for dear life.But when Jackie gets thrown off the carriage goes on a runaway and it's left for Jackie to save Miki.

Arriving back home Jackie finds Lakeisha (his assistant) fighting with Diana ,who's tape searching.After they manage to trash his house ,he sends her away,but she returns moments later with the gangsters behind her ,now they have to get out and the only way is over the roof across a a steel joist across a adjacent building.While this goes on the gangsters decide to blow up Jackie's house.(He's not having a good day).

Reluctantly Lakeisha puts them up in her apartment ,this still has no safety as the criminals storm the the place and take Miki hostage .Now with the help of the Police (or Hindrance in this case) Jackie tries to deal with the gangsters but all goes wrong when the police are spotted and Miki is taken away and Jackie is left boiling at the stupidity of the local police.

Thinking of a way to get Miki back 'Lakeisha and Diana are in tow now ,Jackie is abducted and a fight ensues ,which is filmed in van (qiute brilliant).After a break Jackie gets the better of them and the van crashes ,here Jackie beats out of one gang member the location of Miki and sets on his way ,while the Police turn up to late.

Arriving at a building site of apartments Jackie storms the biulding ,meanwhile Lakeisha and Diana are waiting outside for all of two minutes before they decide to hinder his progress.This is the scene for the standout fight sequence in the film as never before would you have seen Tools and Building machinery used in such a fantastic way,Look out for the stunt Jackie performs over a Circular Saw in motion.

With all our top stunt men from Jackie's team in full flight (watch out for Brad Allen from Gorgeous) .Meanwhile Lakeisha and Diana are getting in to trouble and Giancarlo gets a message from his men that the Chinese Chef has Arrived to his bewilderment.

In the end Jackie is out numbered and held to ransom as Miki and the other girls are paraded in front of him to get him to comply.Back at Giancarlo's house Jackie bluffs to get the tape and when Giancarlo realizes he invites Jackie to partake in a game of fighting ,the only downside is Jackie will be tied up at the time .

Once at the pit Jackie manages to escape ,free the girls and take over a Giant tipper lorry (bit like those Tonka Toys from years ago) Being the size of a small house Jackie  dices with death as he runs around and underneath the truck and more outstanding lays in front of it while it's moving toward him as the front wheels push him back with his feet ( this is plain crazy and a big stunt).

In the end Jackie and the girls acquire the truck head to Giancarlo's house and wreck the joint and a number of high end vehicles ,including a Porsche ,two Rolls Royce and a Cadillac Fleetwood and more.It's quite a scene as Jackie drives this big rig through a building (which they built for the film ) with explosions and people running for their lives ,Marvelous.

As  a later Jackie film and one Directed by Sammo this is pure class and shows Jackie could still do the big stunts even at the age of 43 ,it's a class film all filmed in Australia and one of those international flicks Jackie made which combined Hong Kong with the West.

As with many of Jackie's films the Western releases often are cut ,edited  and soundtracks changed to appeal to to the American market.

Of course what these studios and distributors fail to see is that fans of Hong Kong cinema want to see these films as the director intended.

Here at K.I.T.G. we always try and review the original versions of films if we can actually lay our hands on them.

Mr Nice Guy is a film we reviewed from the  International print as this was the only one available to us at the time.

We still feel the film captures the essence intended ,but run times are slightly shorter  from the Hong Kong Original by about 5 Minutes .

some scenes are edited out from the Hong Kong print and a couple scenes shortened , also the construction scene fight is edited differently in the International print. 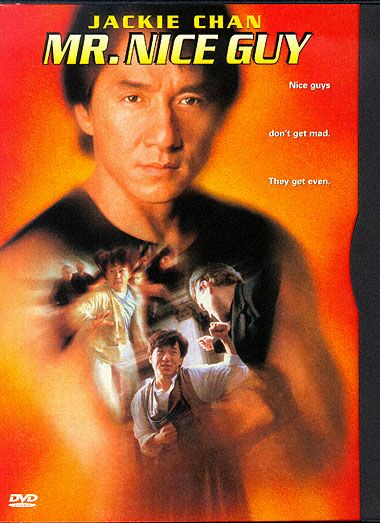 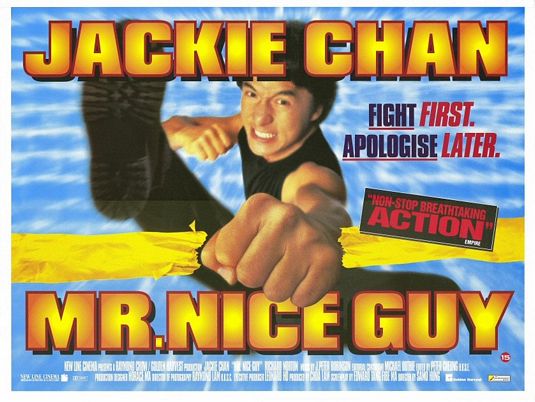 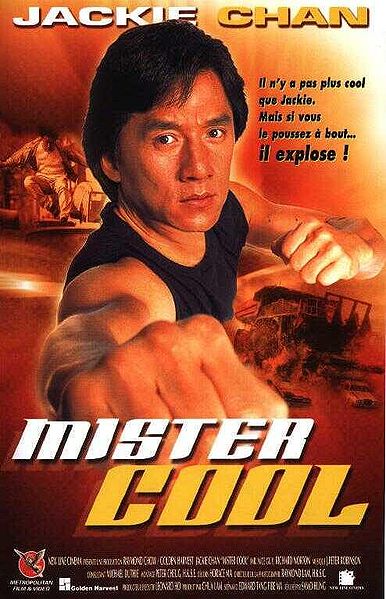