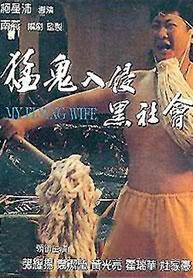 I do like to explore the more diverse roles that people play ,and in this Super natural triad film (crazy i know).

In this film Sammo plays Qun a Triad Boss who's kinda straight in his dealings,but trouble starts when one of his men (Chiu) stops a young girl from committing suicide,now the problem does not lay with the young girl as such but the two Ghosts waiting for her to die so one of them can reincarnate in her body.

Now Siu Hung is a Ghost waiting in the in-between world ,she was drowned many years ago whilst pregnant,now her son 'Larry' was born a ghost and there fore has no soul ,and was waiting for a soul to die to reincarnate .Now not having a soul he needs a reincarnation quota from the officer of reincarnation,but none are available,therefore Siu Hung is offered the quota of a a Triad ghost called Smartie.

So now Chiu has saved the girl who was meant for Larry's reincarnation so Siu Hung decides to get even by haunting him and killing him so Larry has a body.Now the girl Chiu saved tried to kill herself because she was in debt to Triads for money ,as she was swindled by a former lover come con artist.

Now as Qun is the Boss he decides to pay of her debt she should Whore in a One whore Brothel based at Chiu's Home.Now with Chiu reluctant to have her sell her body as he feels sorry for her and her predicament.Now on top of this Ghostly Siu Hung is intent on getting Chiu's body by having Larry take him over and then drown him,thus taking over his body.

Then we have the back story that Siu Hung is the drowned wife of Qun from a previous life ,and when she finds this out she now wants revenge on him as well .So now we have Chiu who is in danger from being taken over and killed and Qun who helps Chiu by battling Siu Hung when ever Chiu gets in trouble .

In a hope to make piece with the Ghosts Qun gets one of his triad friends who is a practicing Taoist priest to excise  her ,but with Chiu not doing as he's told and the priest being blind and incompetent this fails at all costs.

When Smartie finds out that Siu ex lover is reincarnated as Qun he helps Siu Hung exact her revenge as he has feelings for her.But when the truth comes out that in his past life Qun had tried to save Siu ,Smartie lets them get on with it reclaiming his Quota for reincarnation.

Now whilst possessed by Larry Chiu gets injured and put in hospital ,Smartie decides to take his reincarnation pearl  and reincarnate ,now the docters can not bring him round while Chi's Spirit watches .Qun needs to see Siu and Smartie to make piece ,so gets the Priest to make his soul come out of his body (leaving his body dormant) so he may enter the Ghost world.But upon arriving back at the hospital ,he finds Smartie has taken Chiu's pearl so now he has another task.

Arriving in the Ghost world he confronts Smartie and they fight  ,but in the end there can only be one solution.Now Qun needs to get back to his body by 12 midnight or he can not renter.Arriving back at the hospital with Chiu's Pearl and thus saving Chiu ,he has to tell his men that he is staying in the Ghost world to make amends with Siu and his Son Larry .

In the end all get what they want and all are happy ever after ,which is all very nice ,considering the setting of Ghosts,Triads,Swindlers the film is a mix match of genre's that works really well and Sammo excels in the acting and fight stakes with ample comedy thrown in to lighten things up.It's one of those films that not many would have seen and is not wildly available,i watched this on a old VHS  i have of the film and i wish i could see a DVD print before my VHS deteriorates .

Qun and his Men deal with trouble

Siu Hung is Not Pleased