Back to Film Review home. 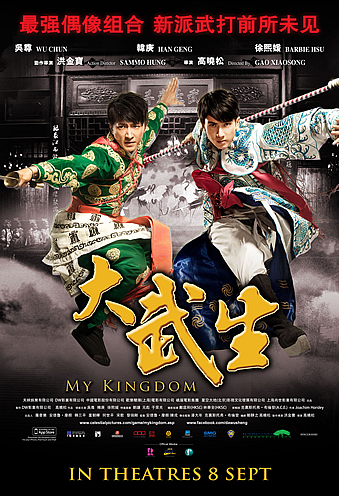 Any new film starring Yuen Biao (even if only in a Co-starring role) is going to get the attention of this reviewer. I am JB and a avid fan of the the younger brother of Sammo and Jackie, to top the that the film is choreographed by Sammo Hung and Chin Kar-Lok.

The boys are disciples of Master Yu (Yuen Biao) ,a Peking Opera Master who has been awarded a Golden Plaque by the Prince Regent.as the Greatest Opera Star. But when the celebrations of this is interrupted by Shanghai Opera star Yu Jiangtian (Yu Rong-Guang) ,proclaiming they duel to find who really is the best .The loser shall break his spear and never perform on stage again.

Surrounded by his many disciples and town folk Master Yu obliges reluctantly. The duel starts out as a feast of excellence for all watching but when things get hectic one of Master Yu's young disciples intervenes to sabotage the challenging masters chances, But when the young boy looks set to get severely injured Master Yu saves him resulting in leaving himself open for defeat.

Forced to break his spear and retire from public performance ( very harsh ! Can you imagine Van Damme and Seagal doing the same) .

But all is not lost over the years Master Yu trains his young Disciples Yilong and Erkui .When their training is complete they set out to the big World. But not without a few warnings from their master .

1)Never enter into a duel ,as the heartache of breaking your spear can be devastating.

2)Never have a affair with a actress

3)Never perform circus tricks like Knife throwing ,it demeans your years of training.

Arriving in Shanghai they immediately come face to face with the Shanghai Opera Troupe run by Master Yu Jiangtian . In their procession they are displaying the Golden Plaque their master had lost some 15 years ago.

Without hesitation they challenge the troupe to a duel , a duel which will take place at the troupes theatre .

Master Yu Jiangtian is confident and sees no problem ,but is evident that when our duo arrive on stage that this showdown will be epic.

In a battle of youth and experience and the fact that it's two against one here ( not fair if you ask me),it's is obvious that the aging master will fall, but when asked to break his spear he hesitates ,but when the watching audience chant for him to do so ,he lashes out smashing the end of his spear to pieces ,then he thrusts the broken end into himself .

Devastated by this his concubine Xi Mulan ( Barbie Hsu) looks on in horror.

But the show must go on and the next day the theatre owner proclaims Yilong and Erkui the new masters of the opera ,the troupe are disgruntled but will follow Xi Mulan and her wishes ,forced to make a decision on the spot Xi decides to stay and perform with the young stars.

It's here the film enters into a lot of innuendo with a love hate relationship going on ,Yilong acts the brash hard nosed youth with no cares ,he has regained the plaque and is content to carry on being the star. Erkui has other plans ,he plans to get revenge for his family's execution by the Prince Regent when he was a youth .Using his opera skills he plans to return to Peking and seek out the children of the Regent (7 princes ) one who is still tracking as he is illegitimate.

He promises Yilong to return ,forcing Yilong to stay and carry on fronting the Opera Troupe.

Erkui tells Xi Mulan he is to leave and buys her a present , Secretly Erkui has fallen for Xi Mulan and from what you see ,she does not seem to mind, but there is another man in the picture , a General in the local Police ,General Liu visits the Opera frequently to see Xi Mulan perform and she plays to his advances ,but her goal may be just because he helps protect the theatre and troupe .

Unfortunately Erkui's revenge is exacted by a series of statements and flashing images of the Regents Princes being struck in the neck by a spear head. A couple are just Newspaper articles flashed on screen. No background into his getting to the Princes or anything like action given to the events .

It's only when Peking Police officers turn up in Shanghai to ask Questions about Erkui ,Yilong comes up with a scam to fool the Police. But the Police have been clever and have brought the seventh Prince to Shanghai and the Opera to lure out Erkui.

Now I don't want to spoil the film for viewers who have not seen the film, but things are never what they seem and it's the blinkered vision of the young performers that will be their downfall. But then their master had told them about not breaking the rules he warned them of ,and as they quickly put paid to listening to his words ,it's pretty obvious something is going on. It's just a shame the director fails to enlighten us during the film .

Gone are the days when viewers put up with a Plot that's not quite there because the action is so damn fine. Unfortunately action in Chinese cinema is not performed like it was in the 70's /80's and early 90's ,mainly due to the fact of the breed of martial artists and action performers don't exist in great numbers any more and the new stars don't wish to be in Hospital every five minutes.

The action in MY KINGDOM is superbly done ,but then with Sammo at the helm it should be ,The duel between Yuen Biao and Yu Rong-Guang is dynamic and beautiful to watch ,as is the duel with the young performers Wu Chun and Han Geng against Yu Rong-Guang.

Truth be told Sammo can make most look like professional artists. Not bad as both performers are Pop stars ,Wu Chun was a member of Mandopop boy band Fahrenheit and left in 2011 to try new things, and Han Geng was a member of Korean Boy Band ''Super Junior'' but got out in 2009 after filing a lawsuit over the ethics of the 13 year contract he had to sign. My question is why would you sign your life away for 13 years I don't know, no money could make do such a thing.

So being that the two are new to the action genre I thought they did OK in their roles , others may think otherwise.

On the whole I enjoyed MY KINGDOM. , I was a little lost concerning the plot of Master Yu's character and I really thought that the Police General would get in on the action to a greater degree ,he looked like he could kick some butt, but alas his demise was not worth much screen time by account.

Score out of Ten = 6 above average but No landmark film. 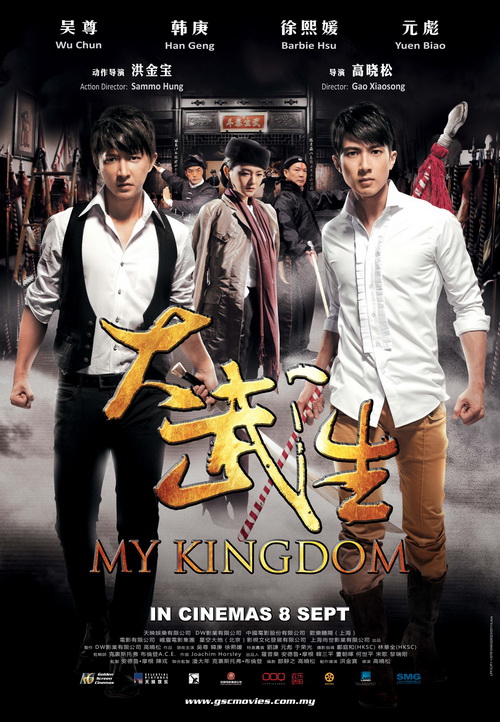 Wheels on Meals - Yuen Biao stars with his big brothers in this classic.

Mr Vampire 2 -  - Yuen Co-stars with Lam Ching-Ying in this sequel.

Millionaires Express -1986 -One of the Best  Hong Kong films of our time.