Back to Film reviews 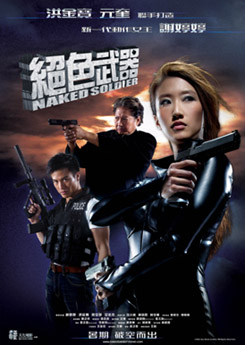 Naked Soldier is the third in the series of the Naked series by Wong Jing. The first film Naked Killer has become a cult classic as it was one of the early Cat III films to come out in Hong Kong .

So here we are ten years later and Naked Soldier is with us .The film actually sets of set before the first ones time period , C K Long ( Sammo) is a a Interpol agent and is about to crack open a big case by closing down a big drug ring run by Madame Rose.

All goes well and C K gets his glory and the world bellows a sigh of relief . But when C K goes back to the USA,Madame Rose follows to exact her revenge on him. Attacking C K's home while he and his family are having a get together . As they storm the house they assassinate everyone inside , wounding C K and kidnapping his daughter.

With the house wired to blow with explosive charges C K manages to escape but gets caught in the blast and is believed to be dead .

Fifteen years later and Madame Rose has built up a empire of Killers who for a price will kill at will. All her assassins are brainwashed to commit acts of violence without remorse . Often looking like they are leading normal lives these assassins blend into society and when instructed carry out the most dastardly acts .

When Interpol want to investigate they get Sam Wong ( Andy On) to take on the case ,with him is his partner Pete ( Timmy Hung) , when they find out that Madame Rose is at large they call on C K Long to help with the case.

Retired and but still handy ,C K has a adopted daughter to. C K proves his worth ,but when Madame Rose gets wind of C K back on the scene she assigns a assassin to kill him, thing is the assassin is C K's daughter Phoenix who Madame Rose kidnapped all those years ago.

Now each of the Naked films where directed by different directors, Clarence Fok did Killer while Tony Ching directed Weapon. This gives each of the films a different feel and even though the stories are similar in vein they have no connection in their stories. So you don't have to view the first to enjoy the next in the series.

Now up to now I have always enjoyed the second in the series more to the first, thing is do I still or does this third iteration in the series offer more for your bang.

Ow whilst the story is quite good ,it's not original but it works well. Now I was sceptical of Sammo Hung being billed as one of the stars , remember Choy Lee Fut ,blink and your miss him .

What I can confirm is Sammo has a good role here and pretty much shares his time on screen with our main protagonist Phoenix (Jennifer Tse) . Also Sammo gets to demonstrate some cool moves and he looks healthier and fitter ,maybe his heart problem scares when filming Ip Man 2 got him living healthier. Jennifer Tse delivers a good turn as Phoenix the cold hearted assassin with a heart ,her brethren brothers and sisters seem colder and more akin to enjoying their work.

Also I was glad to see Andy On in the film as Interpol agent Sam Wong , though I thought he did not get to do to much in the action stakes. Also on hand was Timmy Hung (son of Sammo) as Sam Wong's partner.

Naked Soldier is a slightly odd in a way ,where the first film was born of the 90's and had that certain look and feel about it , Naked Soldier looked like it was trying to emulate a film made in the 90's ,with blue and red filters for some of the scenes and the characters dressed in some outlandish fashion. But then the main of the film is set in 1995 . Compared to the second in the series which had a very modern feel and look to it.

Now this can be done for two reasons ,one is to give the film a really old school feel to it or it could be that the director has not moved on in his film making techniques. Remember Legendary Amazons by Frankie Chan it suffers from the directors lack of moving forward in film making ,but that was partly due to Frankie Chan not having actually directed a film in more then ten years.

Another surprise was the appearance of Anthony Wong as the main bad guy ''Power'' now we are used to seeing Anthony Wong in more sinister roles ,crime dramas and such. But he is quite good at fight action , ,who remembers him in the Jackie Chan produced House of Fury ?

Also Anthony is set to star in a upcoming sequel to ''Ip Man the Legend is Born '' where he plays the master in his later years.

Now the action was choreographed by Coery Yuen Kwei ,who is fond of some wire work and action choreographs many American films to now , though we do see a double for Sammo doing some flying through the air a couple of times ( I never know why they do this with Sammo's fight scenes, it's so not him) ,but I am glad to report the action is fast and captured well on screen with long shots and little of the close up camera shot that plague so many modern fight films.

I enjoyed Naked Soldier ,i may not have the edgy feel or gritty violence and nudity associated with the other two films ,but this is due to conforming to China's strict censorship on such scenes to get the film on screen in China.

I think I still prefer the Naked Weapon to this instalment ,but the sheer presence of Sammo,Andy and Anthony Wong bring this film close and is as enjoyable to watch even without some of the elements of the previous films.

Stills
More stills from Naked Soldier in the Photo Galleries and the Sammo Hung and Andy On feature pages as well as on our facebook page.
Other posters and stills
Credits