Back to Old School home

Japanese Poster ,labeled ''The Legend of the Ninja''

Ninja in the Dragons Den (NITDD) is a cult film of Old School Kung Fu which mixes in the Ninja Theme that became so popular in the early 80's .

Produced by NG See Yuen the man behind the breakthrough of Jackie Chan and the man who discovered Jean Claude Van Damme . H e has produced films with many of the leading Martial arts stars ,discovering them and launching many of them in the process. .

1982 and along with Corey Yuen Kwei Ng wrote the story for NITDD .The film would be the first directorial project for Corey Yuen Kwei who had previously action directed and even starred in a few films to .

Now the action was also choreographed by Yuen Kwei along with another stalwart of Hong Kong action cinema the agile and overly underused Meng Hoi.

The story of the film is set around the revenge by a young ninja warrior known as the ''Shadow '' ( Hiroyuki Sanada) for the death of his father.

Shadow aka Jin Wu is hell bent in dealing a death blow to all who he believes are responsible for his fathers death. He repeatedly attacks court officials and the Ninja clans who killed his father.

But after a attack he takes his wife to China to track one last Ninja who has gone into hiding.

The man in Question is one named Fukoda who now lives a peaceful life in the Chinese wilderness where he makes mirrors to sell.

Now Fukoda has a protégée who is a smart but brash young martial artist who's life involves having fun and taking the rise out of his servant Ah Chee.

Now the young man named Ah Ching (or JAY if your watching a dub and played by Conan Lee) knows Fukoda as Uncle Foo and has no clue to his past.

Basically the SHADOW will attempt to kill Uncle Foo for revenge for his father and of course Ah Ching will intervene to stop this dastardly act.

Varied battles will take place between the two foes , but not before Ah Ching has succeeded in saving the Shadow from a situation in a local eating establishment , when a Spiritual boxer mistakes Ah Ching's Tomfoolery for that of Jin Wu (Shadow) .

When the truth be known ,it will be not a fight between our two heroes but the appearance of the said spiritual boxers father who give the biggest test to our two formidable former adversaries.

NITDD is one of those Iconic films that until the Hong Kong Legends release in the early years of the new millennium .

Prior to this the film was really unavailable other then if you where lucky enough to find a original copy for sale on VHS or you owned one of the many bootleg copies around ,which made some scenes impossible to make out.

As a film it contains many unique elements to it as well ,of course it mixes classic Old School Kung fu action with the Ninja theme which became so popular around this time.

Stand out fight scenes include the Conan Lee stilt fight where he takes on a equally equipped opponent in a battle which can only be described as ingenious as both players give a brilliant display of fighting on stilts. Conan Lee does some amazing kicks and rolls over tables while wearing something so detrimental to what he is doing..

Like wise Hiroyyuki Sanada's portrayal as the Ninja is superb due to his experience in making many films like this in Japan ,many of those with Sonny Chiba in the 70's .

As with many these films from this time period there is a comical element often at the cost of some poor ill fated character ,in this case it is Ah Ching's servant Ah Chee who often comes under fire from the pranks of the youthful and playful Ah Ching.

Some of these scenes are quite funny especially when Ah Chee decides he will full Ah Ching by attacking dressed like the very Ninja he is trying to protect his uncle from.

So does the film stand head and shoulders over the others from the same period ,well many call NITDD one of the greatest martial art films of the 80's . From a action point of view they would not be far wrong as the prowess of both leads give us a many breathtaking fights and nothing more so when they engage in combat with one and another .

And of course the end fight with the foot doctor himself ,Hwang Jang Lee, who gives another performance displaying some amazing footwork.

As a overall film I don't think it falls in the same category as Ng See Yuen's Drunken Master directed by Yuen Woo Ping or his earlier Secret Rivals..

I say this due to the fact that the films main story only really takes up the central part of the film ,of course we have the beginning introduction to our characters ,but two of the first fights are unrelated to the revenge story of Jin Wu.

This also goes for the end of the film ,when our two heroes have settled there differences after battling each other for the past hour.

We are left with the scenario of the Spirituals boxers father being the films final bad guy for the piece .

May be if the Japanese had sent ninja teams to take out Jin Wu ,and our two had come together to fight of the evil horde.

But even as it stands it deserves a essential viewing as one of the iconic films of the 80's to come from Hong Kong. .

Many say this is Conan Lee's defining moment ,but I beg to differ ,as in my next review in our Conan Lee season I state my case for I believe is one of the greatest moments of Hong Kong cinema .

Score out of Ten = A Ninja Busting 8

Stills from the film
Alternative posters and artwork 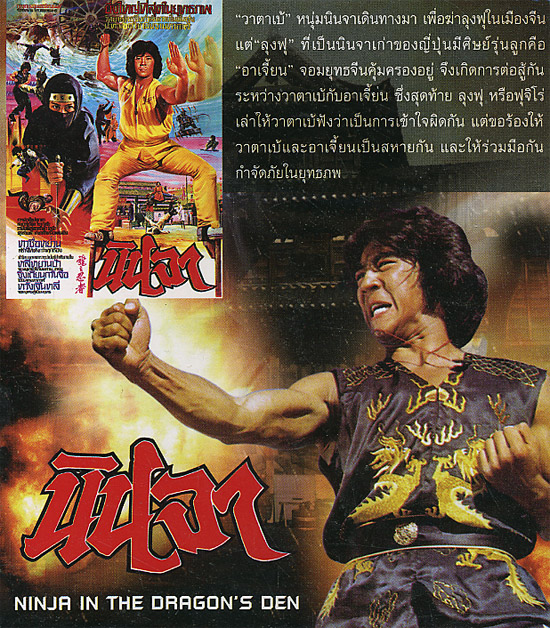 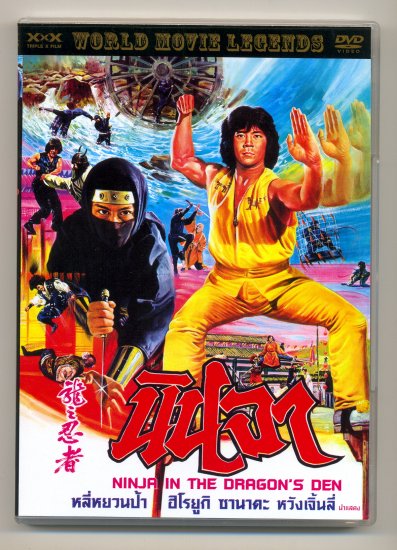 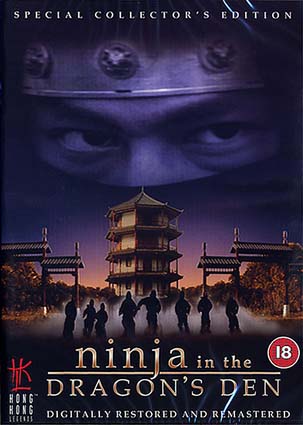 Cast and Credits
Trailers and clips