Back to Artists Home

Olivier Gruner is a Champion kick-boxer and action film actor. Many will know him initially from the 1990 film Angel Town which introduced many in the UK and the USA to this power house fighter.

But of course it had to start somewhere.

Olivier was born in Paris France in 1960 ,growing up was like any other kid ,even falling foul of bullies. But it was when Olivier witnessed a Bruce Lee movie when he was 11 ,that his outlook on life changed.

He took up Shotokan Karate then boxing and then moving on to Kick Boxing.

Now his family thought he would follow a academic career as his father and Brother are Surgeons and his younger brother a Engineer. But at age 18 he joined the French Marine Nationale and even volunteered for the Grueling Commando Marine Unit.

After four years in the Military Olivier left and decided to go and train to be a Professional Kick-boxer. Olivier went to the French Alps to begin his regime.

Having to do four jobs to survive he worked as Bouncer ,Ski patrol-man ,Lift Operator and Trainer. But by 1984 he was able to compete in professional Kick boxing matches..

It only took ten fights for Olivier to become the French Middleweight Champion.. 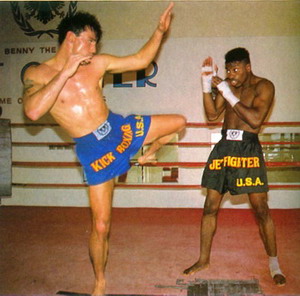 So in 1985 Olivier was able to compete and train full time ,it was only a year later in 1986 that Olivier would reach his goal and become the World Middleweight Kick boxing Champion. He retired in 1987 having done what he set out to do ,become World Champion. 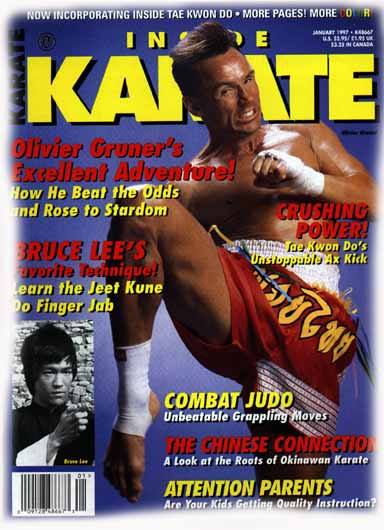 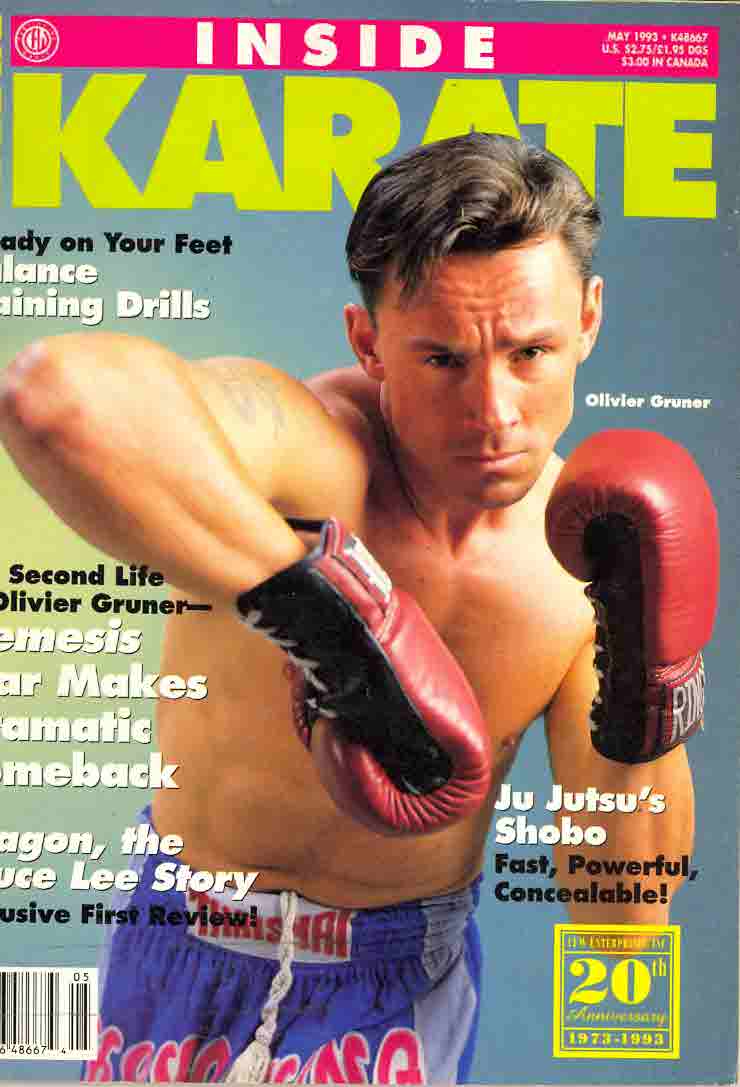 On the covers of a couple of Popular Martial arts magazines.

Apart from all the above ,Olivier is a experienced  Helicopter Pilot,Scuba Diver
and Skier.

Now it was in Cannes 1987 that Olivier would be spotted and picked up for a contract with Imperial Entertainment . His first film was the film I mentioned earlier ,''Angel Town'' a Urban gangland action piece set around the LA gangs . Starring alongside Therasa Saldana and Peter Kwong. It even stars Mark Dacascos . 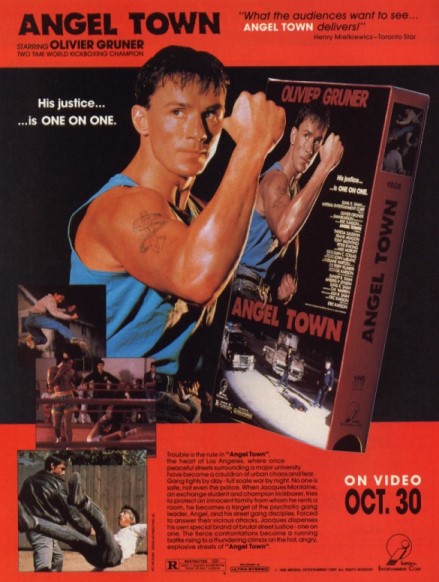 The film was originally intended as a vehicle for Jean Claude Van Damme. But luckily Olivier got the role and it's one that got him noticed .

Now this led on to another classic from Albert Pyun ,for Nemesis in 1992 would give Olivier a more mainstream film ,i remember the billboards for this film everywhere . Albert Pyun was popular after his JCVD film ''CYBORG''. So the fact that Olivier was going to star in a film by Albert Pyun was big news. Olivier plays Alex Rain a LAPD officer gunned down and left for dead,rebuilt with robotic implants Alex begins to question his Humanity and leaves the force.

A great film and a classic ,it spawned some sequels to none of which Starred Olivier. 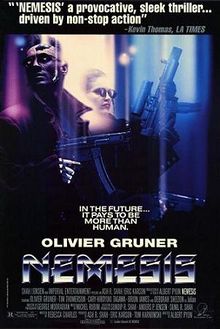 1994 Olivier starred in a film called Automatic in which he plays a Android on the run from his creators after saving a young girl from rape. ,but it was in 1995 that Olivier would make a film with Martial artist director Isaac Florentine ,the film ''SAVATE '' is another of Olivier's classic films all should own. Set in 1865 Olivier plays a French Officer traveling through the US to track a murderer of his best friend when he gets embroidered in a dispute between farmers and a wealthy land owner.

1996 saw Olivier star in a film with John Ritter and Robert Culp ,the film Mercenary was a hit and Olivier starred in a sequel in 1998.

Now Olivier has made some 31 films all with different stories as he's not one to get to type cast in his roles. And as he moves on in his career we can see his roles changing. Other films which I must mention here are 'The Circuit'' (2002) which is all about a underground fight club where Olivier plays a ex fighter forced to confront his past once again. Again two sequels where also done to this both with Olivier. 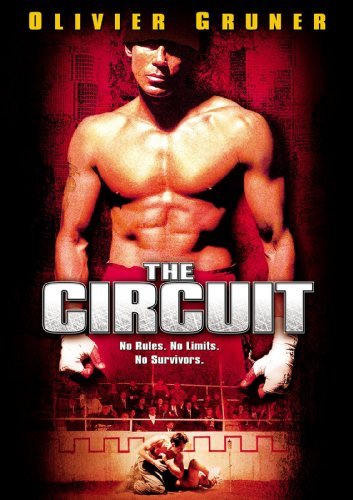 1999 film Interceptors (aka The Last Line of Defense/Interceptor Force) where Olivier played part of a elite government unit which go after Alien entities. He also starred in a sequel in 2002.

2003 and the film Deadly Engagement where Olivier must infiltrate a Terrorist base to save his wife who has been kidnapped ,due to her having the knowledge to activate a Nuclear bomb which the terrorists have. This is a great film as Olivier uses his unarmed combat to take care of everyone.

2009 saw him have a small role in ''Brothers War'' which is a film focused on how the Russians conspired and killed people around the end of WW2. 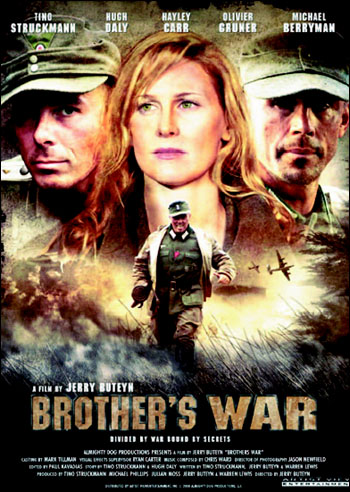 I was lucky enough to meet Olivier at the Berlin Movie convention in August last year where I asked to feature him on site.

Olivier Gruner on stage with Don Wilson in Berlin

It's great that Olivier could take time out to appear at such a event and what a nice guy he is ,so down to earth and laid back.

Olivier in Training
The Future and Present

Olivier continues to get offers for films and ,but chooses his roles carefully , he has always maintained his strict Martial arts regime of training and says that he is a martial artist first then a actor. He recently worked as trainer for Aaron Eckhart for the new film Battle  Los Angeles .

And as you all know here at K.I.T.G. We will keep you informed about future events from Oliver Gruner.

You Can visit Olivier Gruner's official site below

The Films
Here is a list of Films Olivier Gruner has starred in.The ones Highlighted are reviewed on site  ,and of course this grow over the coming months.Just click the highlighted to go to that review.

A Big Thank You from Sertes Nake

This where I must thank Olivier for being such a good sport and friend to allow me to do this feature .It was so good to meet the man I have been watching for years and have the opportunity to keep lasting relationship with him through K.I.T.G.