Point of no Return 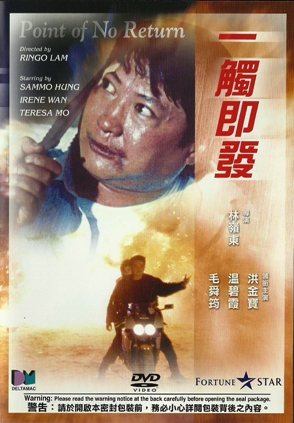 Fat Goose is a happy go lucky fellow who runs in partnership a noodle Restaurant ,One night after taking a shower outside the Restaurant    ( as you do) he is witness to the murder of a policeman  by three men.Shocked by what he see's he stumbles and causes a disturbance which the killers hear,after being chased and confronting one of them ,he runs home not telling anyone.

The next day while visiting his mother ,who lives in a sheltered accomadation ,he decides to phone the police ,but not leaving his name.This does not help him as the police can trace the call.The next day at home he is visited by a officer who barges the his front door after hearing a commotion,Now Goose thinks the killers are gonna get him and when the officer storms in they end up having a battle ,which ends up in Goose's flat being trashed.

Once the officer has identified himself ( officer Pitt) Goose says he did not see anything ,Pitt says he is the suspect and is taking him in,changing his mind Goose says OK i did see the murder ,this still does not get him off the hook as now he is the witness and Pitt's taking him in.

On route to the station the killer ( God of Hell) is out to kill Goose and regardless of who's around tries to take him out whilst he is in the car of Pitt next to him.Here Pitt ensues in a chase to capture the assassin as Goose shouts ''That's him the killer''.After much shooting and crashing the two cars come to a halt and a fight begins between Pitt and The killer as Goose looks on.

In a game of Russian roulette Pitt captures God of Hell and takes him in along with Goose as the witness.But when a top lawyer gets God of on bail Goose is worried for his life .That night a reporter shows up trying to get a story from Goose and along with his of and on girlfriend they get firebombed .Now Poor old Goose has been burnt out of his house and then finds out that the reporter is Pitt's sister .

Now Pitt takes Goose in to live with them while the case is on and try and catch God of Hell. But when Pitt confronts him at a riverside bar and fights him nearly resulting in major injury ,Goose decides he does not want trouble and tries to make amends with the killer.

Now God of Hell is working for the lawyer who is running a scam by using illegal refugees as prostitutes to entrap local business men and high ranking policemen by recording them having sex.

Now when a meeting with God of Hell goes wrong and Goose and Pitt are captured and tortured with electricity ,they are saved by a refugee that God has been holding and they escape with the girl and head back to Pitts apartment.

Pitt knows the lawyer is behind the trouble and breaks in to his mansion with Goose in tow who ends up causing a ruckus.But they do get a way with a batch of pictures ,which implicate none other then Pitt's own boss.With the pictures at large the lawyer wants them back,Pitt has confronted his Boss with them who agrees to help.

But in the end the lawyer wants them dead and gets God to break in to Pitts apartment ,Kidnapping his sister ,injuring Goose and May the refugee .Now Pitt and Goose will have to exchange the pictures for his sister ,but the lawyer wants no one left alive in a fight involving Guns, Fire ,Feet and fists our Heroic duo will need to pull out all the stops to get justice and free Pitt's sister and bring the bad guys to prison or Hell . In a battle that has Goose confront the God of Hell ,Pitts boss getting shot and Pitt injured as well ,leaving the lawyer to get clean away ,or so he thinks but in one last fit of rage Goose will bring them all down.

Now made in 1991 this Ringo Lam directed film is quite dark in places which is a trademark of his ,but still manages to feature some comedy elements to it as well ,like Goose's mother who's a bit eccentric and gets Pitts sister  ( who she thinks is Goose's new Girlfriend ) to perform to see if she can breed well.Then there's the Relationship between Pitt and Goose which is just like every other buddy movie you may see.

But in the end the brutality still stands out and the film engages the viewer for the complete 90 minute running time with car chases ,fights and gun battles at a rate of knots.It may not be Sammo Hung film that comes to mind but it's solid entertainment and one i recommend.

Poor old Goose ,threatened and Now Burnt Out of is Home

Enough is Enough Hell hath no fury ,Goose has the upper hand

1) In one scene ,after Goose has been made homeless ,he is put up by Pitt and his sister ,asking if he is hungry,she offers him fruit salad,looking dismayed Goose say's any Meat ,she say's be thankful as she dishes him a mice like portion - poor man would die from starvation before the killers get him.

2)Another scene of interest is the fight Pitt has with God of Hell while Goose watches ,it takes place at a riverside or quayside Restaurant,if you know your Hong Kong films ,you will recognize the place from 1988's Dragons Forever .