In my bid to compile a Jujutsu page which looked at the arts from the eyes of many Pioneers  , compiling the information needed to represent Jujutsu from a world wide point of view ,i was saddened to hear whilst in the process of  putting this page together that Professor Wally Jay had passed away at the age of 93.

Professor Wally Jay's influence in the Martial arts World has been spread worldwide.

So to find out about this Great master please read below for a insight in to a great Jujutsu master.

Born in Hawaii in 1917 Wally Jay who is of Chinese descent took a interest in Boxing from the age of 11 when he took part in a community training programme, but it was in 1940 that under Juan Gomez a Danzan Ryu Jujutsu instructor that he would take a interest in Jujutsu, Also around this time he would be taught Judo by Hawaiian Champion Ken Kawachi.

Just 8 years later Wally and his wife Bernice would be issued a Certificate of Mastery by Dazan Ryu Founder Seishiro Okazaki.

In 1960,he was named by the Hokka Judo Yudanshakai as "Northern California Judo Coach of the Year". Wally Jay was responsible for producing many Regional and national champions .

1969 brought another landmark when Wally Jay was inducted into the Black Belt Hall of Fame.

Finger locking and two way Wrist action ,it's based on the Kodenkan Danzan Ryu Jujutsu system. But the principles of Small circle is compatible with most styles and not just Jiu-jitsu.

Some Jiu-Jitsu clubs will teach in many ways while others may be stuck in their restricted style and syllabus. Circles are a part of Jiu-jitsu whether they be large ,Medium or small, Professor Wally Jay believed that small circles leave less room for escape . While other styles teach using large circles as a way of gaining control ( the larger the circle ,more control) .

Now for someone not familiar with Jiu-jitsu this circle theory might be seem vague ,but once grabbing a opponents arm/wrist or whatever . By manipulating the arm/Wrist/leg or circling the body gives ease of manipulation.

For instance someone attacks and you mange to block him ,and grab the wrist say. Now to apply a wrist lock /finger lock ect, ,trying to go straight into the lock would be quite tough as the attacker fighting back is going to resist .by performing a circle with the arm say clockwise if standing on the opponents right outside.,would slightly confuse the attacker so that when you came back to six O'clock you could apply the lock.

The difference in styles would be a style using large circles would take the arm round and above the attackers head ,with Small circle the circle would be tight making the technique faster ,but of course precision is the key . You can see how making a large circle would give the attacker time to think more and leave you open as you circled the arm.

The argument could go on for ages as to which is the better way to accomplish a certain technique. But Professor Wally Jay was the chosen Instructor by Bruce Lee to teach him the principles of Jiu-jitsu, and we all know about Bruce Lee don't we?.

Professor Wally Jay travelled the World teaching Seminars and demonstrating his art , in 2002 Professor Wally Jay retired from being the Grand-master of Small Circle Jiu-jitsu and passed on the Honour to his son Leon Jay , who teaches out their Club in the UK , just outside of London.

Professor Jay brought a new twist to Jiu-jitsu , his style is basically simple ,but being able to perform the techniques right as to control your opponent are like all arts , can take a life tme to fully master.

Professor Wally Jay will go down as one of the many pioneers of Jiu-Jitsu .

Below are a couple of Videos of Professor Jay demonstrating his art , proving how effective it is, also available to but in shops and online are instructional videos and books by Professor Jay .So even though the Master has passed on he can still influence you right in your own home.

Professor Jay converts some non believers in to Jujitsu fans

A brilliant and Painful demo from Professor Wally Jay

This video features Professor Wally Jay at a seminar in 1991 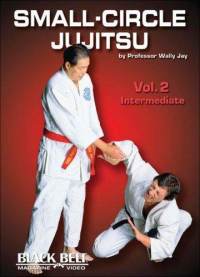 On the covers of ''Karate /Kung Fu'' and ''Karate International''

Go To Our Dedicated Jiu-Jitsu Page
Part of The Kick'em in the Ghoulies Group of Fan Sites,Copyright ©2022