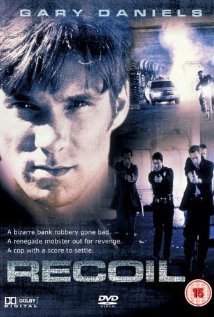 Gary Daniels , A English Martial artist and actor who found fame in the ring and then took his art to the screen , Gary is a fluid and fast Martial arts expert who in his prime was notorious for his hard hitting aggressive fights in the ring, but he won many matches being this way.

For many hearing of Gary it would have been in film , he starred in City Hunter with Jackie Chan and Richard Norton , and he did many films in LA in the early 90's such as Ring of Fire. More recently he has appeared in the ''TEKKEN'' movie and The Expendables with Sylvestor Stallone.

Now this feature from 1998 sees Gary as one Ray Morgan a LA cop who gets embroidered in a quest for revenge while trying to stay alive as a another party wants revenge against him.

After answering a call on the radio Ray and his partner Lucas rush to the scene of a robbery where most of the force seems to have turned up at.

The robbers who have entered a Bank have gone in with excessive force using Grenades and big guns to get the stash . As they exit the Bank after killing few civilians they engage in a battle with the police who end up taking a quite few casualties as well , Ray turns up just when a fellow Police Officer has been shot ,Ray comforts his friend just before he dies.

With Rage in his eyes Ray confronts the Robbers head on ,taking out a couple with clean head shots, but the robbers retaliation gets more aggressive as grenades are thrown and Police cars go flying . Ray his partner and four other officers get the drop on the gang bar one guy who gets away on a motorbike.

Ray and Lucas give chase with the rest of the force in tow, A massive car chase ensues with cars flying and the robbers total disregard for public life .

Tracking him down to a warehouse they chase him in which ends up in our robber getting dismounted from his bike. As the five officers approach him they pull their guns and tell him drop his weapons, The robber does but as he turns in stead of raising his arms he turns as if to shoot a gun at them , the five officers open fire and land a barrage of bullets into his body.

After unmasking him they discover he's just a kid and that he had no other gun. Unfortunately a bystander had videoed the whole thing and our officers are branded killers by the media.

To top this the young boy was the son of LA crime family 'the Sloans'.

Now the Sloans want revenge .Things are going to hot up around Ray and he'll be in for the ride of hell .

In like a scene from the TERMINATOR the crime boss puts out hits on all the five officers. In out right blatant view they set up two officers on the vice beat ,another officer is entrapped on the motorway and then they enter the Police station dressed as officers ,only to open fire in a crowded Police Station.

Whilst this has been going on Ray and Lucas have been on a short vacation ,when they get back ,Ray's boss tells him to get his family out of the city and phone him when he gets there. What makes matters worse is the young kid had no ID on him and they had still to find out who he was, they are being attacked but by who is a mystery to the police ( of course we the viewer know as we are privy to both sides of the story).

Things go from worse to even worse when the kids body gets cremated in a supposed mix up and the records and autopsy report go astray to .. .. They come to the conclusion that there is a insider helping the criminals out.

But when looking through mug shots Ray spots the kid and this reveals to the cops that they are dealing with big league crime bosses.

Ray gets his family out of town but they never reach there destination as they are attacked on the road and Ray has to fight for his families life to protect them. But when confronted by a juggernaut at the hands of one of Sloan's goons they get run of f the road and down a ravine. Ray desperately tries to hold on to his children as they career down the hillside.

The next thing Ray Knows is when he wakes up in a monastery with Lucas by his side. , he has been in a coma for a week .

As Ray comes to terms with the happenings of the past week he sets about getting even , but when he thinks it can't get any worse he finds out that his best buddy has been blown to bits , realizing only his Captain would know of his manoeuvres throughout all this he phones him up tell him he's coming and it's payback time.

From here on in this adrenalin fueled film goes into overdrive as Ray embarks on a siege of the Sloan Mansion by himself ,resulting in the death of another of Sloan's Sons.

It will all end up at Sloan's drug Factory where the Sloan's and our bad cops will get vengeance thrust upon them in one final battle.

I must say that this was one hell of a 90 minutes from start to finish , even getting a coherent story thrown in as well,though quite basic. If any film could show the abilities of Gary Daniels this is it. From gargantuan explosions to some amazing car chases (all done for real) , I have not seen this many vehicles trashed for real in a film for some time.

Plus with excellent Gun-play and pyrotechnics all finished of with a healthy dose of Unarmed Combat.

The only downer of this film is the fact it was straight to video and had a low budget ,but with entertainment like this who cares. OHHH! And why could they have found a stunt double more akin to Gary then the much darker bigger guy they had do the car roof top scene ,which by the way was pretty mad.

It may be budget but entertains like a Blockbuster

Score out of Ten = A Adrenalin fueled 8

Stills
Gary Daniels is Detective Ray Morgan
When Things Heat up!
And the Crap hits the Fan!
He Will fight to protect his loved ones
And kick butt! doing it
Smash the drugs ring.
And risk his life for justice.
Trailers
Cast and Credits
Other films with Gary Daniels Reviewed on site