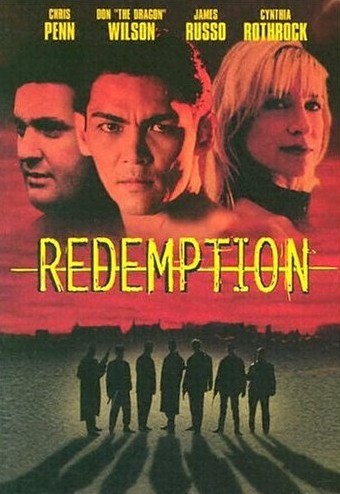 On viewing the cover ,you instantly think ,this is gonna be good .You got Don,Cynthia and Richard Norton in a film directed by Art Camacho a director who knows stunt and fight choreography.

Filmed in 2002 it's one of the stars later films too .Don 'The Dragon 'Wilson who plays John a Swat team leader who's goal is to free hostages and protect the innocent ,even if it means putting the lives of his fellow officers at risk.

On a routine bust John gets some flack from fellow officer Tom (Richard Norton) ,they argue and have a brawl in the Police station locker room ,but before a winner or loser is shown the fight is broken up by officer Erin Murphy (Cynthia Rothrock).

Now later on whilst on another incident which involves a group of Triads who are muscling in on the turf of Tony Leggio (Chris Penn) ,John and his fellow officers are on a covert operation ,but again against the wishes of fellow officers John decides to infiltrate instead of waiting for back up.

Unfortunately Officer Murphy is blown to to bits (Ok not bits ,but caught in a explosion that kills her).

Oh No! They have killed of Cynthia's Character before she got started.OK i;m calm Now we still have Don and Richard on hand (but I'm still gutted).

Even though John did not tell Erin to go in ,she decided for herself and paid the price ,but bad luck for John as his fellow partners all agree to sign a statement to say that he ordered Erin to proceed .

So now forced to quit the force or be prosecuted by internal affairs ,John is out on his own ,losing his Job and his Love interest (Erin) in one go.Now being divorced and having a kid who  lives with his ex and new partner John needs to find work ,so when a friend of his a local Hooker he has helped in the past ,offers to get him work with the local mobster Tony Leggio ,he agrees.

Thing is now John starts working for Tony after they have tested his ability to deal with a situation.John makes drop offs and general work for Tony ,the two become good friends ,until the the Triads catch up with him and kill him with the aid of one of Tony's own men who double cross him,(don't help him much as if they gonna leave him alive ).

Add to this the side story of the Hooker that loves him and has fallen foul of her ex pimp ,who she has now killed.The local Police chief is asking questions and demanding answers of John's involvement.

It all climax's rather quickly when the local Triads hold up a Bank to rob a certain customer ,John happens to be their and ends up battling the thugs ,bringing them down and saving officers lives (the same ones that stitched him up).

The Police chief is pleased His ex partners help him and end of story.

So how was it ,as A piece of fodder it was OK .From a fight point of view ,and that's the reason we watch these films ,it was dire .

Yes Don Wilson beat some bad guys and quite nicely ,but there was not enough of it .The fighting was so scarce it's hard to classify this as a fight film.

The fight with Richard Norton was more of a brawl and Cynthia got to Kick a guy in the head before being blown Up.

Not a fight fest i assure you.What was Art Camacho thinking?