After the success of ''YES MADAM'' it was of course inevitable that the stars would be snapped up for other projects, For Michelle Yeoh (then Khan) it would give her another chance to showcase her skills ,not only that but the producers would team her up with Japanese legend Hiroyuki Sanada and Hong Kong idol Michael Wong.

The three would play similar roles I that both Michele and Hiroyuki would be police officers and Michael playing Air Security.

When our intrepid three foil a Hijacking by taking on the hijackers one on one in a opening scene which will leave you breathless wanting more.

Now of course our heroes are not out of the fire just yet , as comrades of the hijackers vow revenge.

Taking place in Hong Kong when they used to be able to shoot films on the streets more freely ''Royal Warriors '' is 90 minutes or so (depending on version ) of high adrenalin fights, car chases and more.

When Peter's (Sanada) wife and child get blown to bits with a car bomb meant for himself ,Peter engages in one of the most crazy car chases filmed in Hong Kong.

Failing to exact his revenge he becomes a loose canon in a bid for revenge ,which involves risking the lives of both his new found friends ,Michelle and Michael..

When Peter tracks down the killer to a local club he uses his friends as bait to catch the killer ,no only do they engage in battle for survival but many innocents get maimed to.

Catching one of the guys and killing him ,they think they are safe ,but Michael learns of a another guy (who they had all met) .

When Michael gets captured and Michele is set up to be taken out ,Michael sacrifices himself as Michele watches hopelessly .

Now still intent in on getting the other two our killer hatches a plan to hold Michael hostage ,by stealing his coffin and rigging it with explosives in a disused Quarry.

Now our remaining heroes will have to confront their enemy face to face in a battle for revenge and justice ,Michelle Yeoh style.

Now for the UK fans ,this film was released prior to the original in the UK and labelled ''POLICE ASSASSINS'' . I still have the original VHS print of the film.

Summing up really is more to tell you how you should not miss this film at any cost if your a action fan.

From the fight on the plane to the nightclub each scene is a brutal and excitingly choreographed masterpiece. For hard core action fans Michelle Yeoh was well known before her stint in ''Tomorrow never Dies '' and ''Crouching Tiger Hidden Dragon''.

Along with it's prequel ''YES MADAM'' it's one of the most exciting films you can watch from the Golden era of 80's Hong Kong cinema and all thanks to Sammo Hung and Dickson Poon who partnered D&B Films.

Michelle Yeoh the girl with the deadly smile!

See! Told you she was deadly ,Now what you gonna do?

The Calm Hiroyuki Sanada a legend in film.

Michael Wong and Michelle Yeoh (above)

Sanada goes for it ! (above and Below)

In Action Hiroyuki Sanada is man of many means! (above and Below)

I need one of those.

Michelle Yeoh takes no prisoners,though she looks like she's in one .(below)

That's it Michelle ,Kick his arse!  (below) 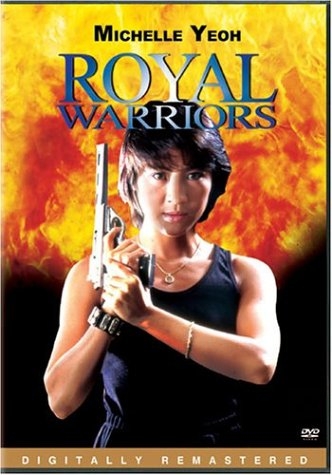 Yes Madam -  Michelle teams up with Cynthia Rothrock in the original of the series.