aka: Encounters of the Spooky Kind 2 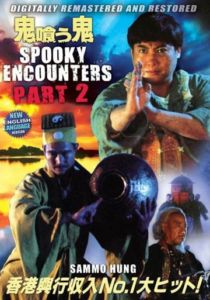 Taking aside Sammo's works with in the Golden Harvest group ,ie: Shanghai Express / Eastern Condors,and the many films with Brothers Jackie and Yeun Biao.

Spooky encounters 2 under his Bojon film company I feel along with Pedicab driver (also under Bojon) are two of Sammo's finest outings .

With Spooky 2 Sammo plays Abao (Po as subtitled on my print) a apprentice under a Taoist priest Master Jia (Lam Ching Ying) ,The film has no connection in story or character to the first film .Now Abao is bequeathed to marry his child hood sweet heart Little Chu .

Now Little Chu's father Mr Chu runs the local tea-house ,he sees Abao as a young man that gets into trouble (though through no fault of his own) ,now a wealthy young man named Master Shi also has feelings for Little Chu and often flirts (and gropes) her on his visits to the tea house.

Trouble starts when once again (Abao) Po is accused of starting trouble with Master Shi ,things get more out of hand when Master Shi's Black Magician uses magic to help Master Shi in a fight with Po.

This is soon put a end to when Little Hoi ( Meng Hoi aka Mang Hoi) sees what going on and with the aid of a dog stops the magicians spell ,this ends in Po chasing Master Shi around the tea house which gets trashed in the process.

Master Jia tells Po to take a responsibility and suggests he opens a business ,and he knows of a man who will rent him a stall. Thinking it's a good idea he and Little Hoi open a Congee ( vegetables /meats and spices soaked in Rice- a traditional Chinese fast food) stall .

Business is slow ,so slow due to his landlords own Congee restaurant open opposite. His only customer ends being a Young girl Ghost ( Named Hong) who cheats him out of his money so she can get food for her still alive and Blind mother.

Abao tracks her down and sets about vanquishing her ,but when it's revealed that her mother is still alive and does not know she's a ghost ,he agrees to help by posing as Wen her cousin she has been searching for.

He tells Little Hoi of his escapades and between them they come up with a plan to rob Master Shi of his antiques . But as the plan looks faultless as Hong changes her appearance to that of ,little Chu.

The thing they did not count on was Master Shi's Black Magician spotting that Little Chu is in-fact a Ghost .

As master Shi plays along his antiques are getting trashed as Hong throws them to the guys from Master Shi's apartment. At the opportune moment Master Shi attempts to rape Hong and the guys including Master Jia (who was passing) joins in to save her.

But when it's revealed she's a ghost and Abao and Hoi have been using her for revenge on Master Shi ,Master Jia goes after Hong to vanquish her .

With Abao and Hoi in toe they get to where Hong is staying with her mother ,here is where Hong's mother finds out the truth .after a battle which leaves Hong very weak and Abao torn between his master and his friendship with Hong.

Of course with the secret out that Abao has been helping a ghost Master Shi and his Magician plot a plan to cast Abao's soul into another animal ,to do this they must scare the living daylights out of Abao ,and it's just that they do in one of the most craziest stunts in the genre I have seen ( those cockroaches are real guys) .

When Abao is found the next day in the village wandering aimlessly like he's had a lobotomy and repeating that he's scared Master Jia knows some-things up.

Having to now find Abao's soul Master Jia and Hoi set out to track where our two evil doers have cast Abao's soul into.

his body by the aid of some concoction., they trick their way into Master Jia's temple where Hong is hiding out with her mother and Abao's is in a useless state.

Once in they set about putting their plan into action , but Hong has other ideas and possesses Abao's body so she can fight the Magician .

It's here that Hong gets badly injured and looks set to vanish, but in the nick of time Master Jia turns up with Abao's soul ,which is in a small mammal.

With Mr Chu on the doorstep to witness Abao's madness (Master Shi had invited him to win Chu's hand) .

With his plan in tatters the magician leaves with Master Shi ,but this will not stop them ,they lure Mr Chu to their den and drug him making him a deranged killer and set him upon Abao,who just happens to be in the little boys room after coming around from his soulless body ordeal.

With Hong getting resuscitated with the aid of Hoi ,which is getting out of hand because of their persistence in edging towards Mouth to Mouth method which could kill Hoi,.

But no time for the idle ,with Abao' being attacked by his future father in law who is under a spell to kill. It looks like the only way to stop this lunatic Magician is to take the fight to him and it's that which Master Jia ,Abao and Hoi do.

Now Master Shi has become the magicians bitch by force ,and the bewitched corpses that are on hand to fight our heroes ,or should I say ''Mummy'' .

This is the fight you have been waiting for as the battle for Good vs Evil is about to begin (Mortal Kombat eat your heart out.) Who shall be victorious ?,I'm sure you know.

In a nutshell ,this is one of the Hong Kong greats and in many opinion including my own betters on the original Encounters of the Spooky Kind.

Sammo is brilliant as the unlucky Abao, but he shows of his fighting ability to full benefit here. The late Lam Ching Ying is flawless as the Taoist priest he made famous in the Mr Vampire series.

With a great supporting cast as well which includes the ever reliable Mang Hoi you can not go far wrong watching this action Kung Fu horror ,it never fails to entertain me and I have seen it a number of occasions.

Score out of Ten= A Evil Busting 9

Check out the review of the original Encounters of the Spooky Kind here!