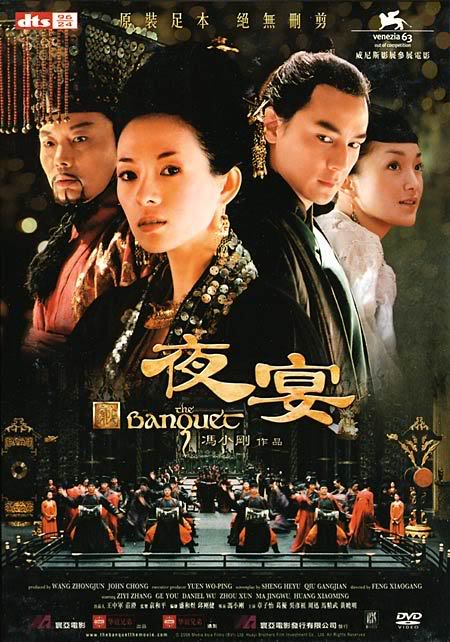 Feng Xiaogang is not just a director ,he is a actor and writer ,so has a good insight into what a good film should be like ,it's often said that if the director of the film is a screenwriter as well then he understands more about showing on screen what's written on paper.

Feng has also starred in quite a few films to in small roles and cameos. With roles in films like Kung Fu Hustle,True Legend,let the bullets fly and Wait till your older.

Based loosely on William Shakespear's Hamlet and Henry Ibsen's play ''Ghosts'' , the story set in tenth century China in the Ten Kingdoms period..

It's the end of the Tang Dynasty and Prince Wu Luan ( Daniel Wu) takes refuge in far away theatre to study Music and dance, he has gone there after his love for a noblewoman by the name of Little Wan ( Zhang Zi Yi) is ruined when his father the Emperor decides to marry Little Wan.

Some time after the Brother of the Emperor kills his brother in a plot to take the throne for himself.

This puts the life of the Prince in danger as the new Emperor , Emperor Li sends out assassins to kill Prince Wu Luan as he is the rightful heir to the throne.

Prince Wu Luan survives the attack and returns to the Palace to be confronted by Empress Wan (Little Wan) .

The Banquet (released as Legend of the Black Scorpion in the USA) was Hong Kong's entry into the 2006 Academy Awards for Best Foreign Language film ,it went up against China's entry by Zhang Yimou , The Curse of the Golden Flower.

It also won two out of five nominations at the 43rd Golden Horse Awards.

One thing Feng Xiaogang's film encompasses quite a artistic feel and look to it but at the same time can be quite brutal in the action scenes which are choreographed by the Yuen Stunt team ( run by Yuen Woo Ping) , Yuen Woo Ping was also the executive producer of the title to.

The battle sequences are quite stunning whilst maintaining a unique feel and look to them ,the attack on the theatre is well thought out with the attackers all in black armour and masks like something from the Lord of the Rings ,whilst the ones defending the theatre are all in white for a innocent look , the action melds dance and martial arts into one which works on a level I have not seen in any other film.

Prince Wu, Luan's goal is to find the truth about his fathers death and exact revenge on his Uncle . But there are other factors in operation within the Palace walls . Certain Officials believe if the Prince can a test the throne Empress Wan as his stepmother would become the Empress Dowager making her the most powerful . But Emperor Li plans to marry his late brothers Wife ,making her the current Empress and unable to cause any problems for him.

Empress Wan goes along with Emperor Li's plan as to make him feel easy around her , but her plan to exact her revenge takes a untimely turn when the Prince is sent of in a exchange between the Kingdom of Khitan , a trade of princes for hostages unfolds ,but the Khitan Prince is known to be a imposter leaving the true meaning behind Prince Wu Luan's exile open to question.

Of course Emperor Li has other plans for Wu Luan , he wants him dead .

Thinking he is in the clear to do what he wants Emperor Li arranges a Banquet for all his officials to attend to celebrate his victory in gaining control of the Kingdom and it's people.

But the son of court official Minister Yin , General Yin Sun know that Emperor Li should not rule , Plus Minister Yin's daughter Qing Nu was originally betrothed to Wu Luan . General Yin ends up saving Wu Luan from his fate set by his uncle.

But while the Yin;s plot to kill Emperor Li ,Wu Luan has his own plans , all will be played out at the Banquet where all intended parties will come together to end it all once and for all.

That's the basic plot of the film ,i have left many intricacies out as to not spoil the film for first time watchers .If your into Wuxia style films then the Banquet is a must see as it accomplishes all what you expect from this style of film ,but also has that added intrigue and mystery about it ,similar to films like Donnie Yen's Wuxia and the more recent White Vengeance . But of course this was done first which makes it that more special.

And while the plot thickens the complex action continues to entertain on a excellent level .

Zhang Zi Yi is cunning and charming at the same time in her role as Empress Wan ,though she gets less to do in the action stakes compared to Crouching Tiger or House of the Flying Daggers.

But she shows how good her acting skills are here , her changing moods in the film have the viewer unsure as to whether to root for the character or see her as evil doer . Cleverly done by anyone’s standards.

Daniel Wu is probably one of the most versatile actors to come out of Hong Kong in many a year ,not bad for a young man brought up America after his parents moved from China. Wu who studied the art of Wushu is also a good screen fighter . Here he is a welcome addition to a great cast as he showcases his abilities in the martial arts and acting departments.

Running a little over two hours The Banquet is feast for the eyes , the Bluray edition is a fine print and of course has a DTS 5.1 HD soundtrack for those with suitable equipment .And apparently the film is five minutes longer then the DVD version ,but without viewing both I can not confirm this.

So for martial arts action,Intrigue,Love stories and a sumptuous looking film you can do far worse then The Banquet ,but there are only a few that surpass this epic overall.