Back to reviews Home 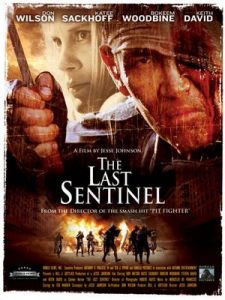 In this film who's story shares similarities to iRobot . The world has fallen prey to annihilation by the very core of what was supposed to protect it.

Replacements for the core police known as the Drone Police have decided to instead of protecting the human race ,they shall wipe them out .

In a post apocalyptic world Don Wilson plays the last of a group of enhanced soldiers called the EE 700 squadron,named Tallis.

As the last survivor of his group he lives as a recluse in abandoned buildings, taking out Drones when he can and basically staying alive. But one day he saves a young woman after her party has been attacked by the drones .

Taking her back to his place he finds out she is from a resistance unit who are out to get a control mechanism from the Drones laboratories . If she can get the control devise back to the resistance they can stop the drones from working ,thus saving the human race from extinction .

Weary of Tallis at first they kinda get to respect each-other and Tallis teaches her a way of survival showing her attack drills and weapon combat.

Between them they will get to free the world from the robotic rule they are under.

The film is shown somewhat in flashback as we see how Tallis was groomed for his role from a child and how when the drones attacked how his unit was sent out to attack the drones .Featuring a good supporting cast like Keith David as Tallis's commander and Bokeem Woodbine as Anchilles ,Tallis's comrade in arms.

When asked last year what his favorite of his films where ,Don Wilson said that The Last Sentinel was his favorite. I can see why ,it may not be heavy on the combat stakes but this gives a alternate concept for Don . The battle scenes are well shot , and feature lots of pyrotechnics and good action. It also shows that Don can turn his hand to other roles as opposed to just being the ring fighter or man out for revenge of someone’s death.

Though the beginning of the film may seem a bit slow in places it soon cranks up with ample scenes of confrontation between Tallis and the drones.

Like I said unarmed combat may not be the films strong point but when it does happen we are treated to some nice scenes featuring knife attacks.

Also Tallis must face the ultimate drones which are more cyborg like and carry swords as well as fire power. A well placed sword battle was included at the request of Don himself.

Now some of Don's fans may not like the lack of long fight scenes ,but then after filming as many fight films as Don has ,you gotta give it to him to try something new and still keep it action orientated.

It was also the only film where Don Wilson was Billed without his ''Dragon'' moniker.

Score out of Ten = a traumatic 7