Starting with our first review here , The first in their series looks at the film maker and screenwriter Park Hoon-Jung.

Though this is the first this year for us the series started of with ''I SAW THE DEVIL'' , a film we viewed last year at the Choi Min-Sik screenings. You can see our review on site Now. 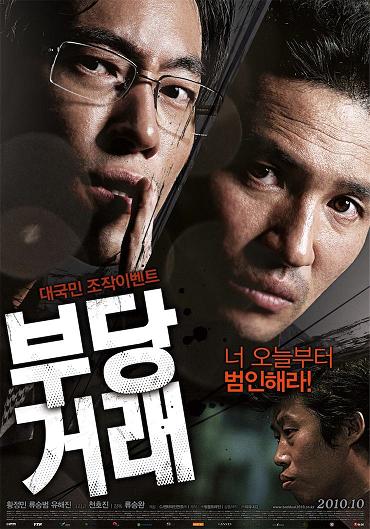 The Unjust is a 2010 South Korean crime thriller directed by the action kid himself, yes Ryoo Seung-Wan.. Unlike most of the directors features The Unjust was not written by him but by director ,Screenwriter Park Hoon-Joong ..

Now lucky enough the London Korean Cultural Centre in London is running it's 2014 series of screenings and has kicked of with a retrospective of Park Hoon-Jung's screenplays ..

The first shown was ''I SAW the Devil'' a film we covered last year at a similar event by the center when actor Choi Min Sik was the chosen subject of one of the centers series of films screenings. .

So for their second screening in this series we have The Unjust which Park Hoon-Jung wrote as he did with ''I Saw the Devil'' .

Here we have a very different story and one that focuses on the lengths people in various organisations, government and authorities will go to meet targets ,get promotions to get ahead and be regarded as the hero or good guy.

When a there are a series of crimes involving young school girls being kidnapped and killed the pressure is on for both the Police and the prosecutors to arrest the subjects responsible and deal out justice.

But when a suspect is killed by one of the victims Uncles who is also a police officer it becomes apparent that justice may not be at the root of the many actions taking place.

Captain Choi who is working one case is removed from it to work on the Kidnap case when it is known that the killed suspect was not the killer.

Of course the answer is to please the big wigs in power and bring someone to justice whether they did it or not, by targeting a former known pedophile who has a job as a School bus driver ,the MIS build a case to arrest and charge the suspect named Lee Dong-seok. .

To get Lee Dong to co-operate Captain Choi uses the services of one Jang Seok-Gu a Business man and underworld boss .

Jang has profited from Captain Choi's involvement in another case when Jang's arch rival Kim Yang-su lost a deal due to intervention by Captain Choi investigating and arresting him.

In turn Prosecutor Joo becomes suspicious of Captain Choi when he discovers Internal affairs are looking into him . Now on top of this Prosecutor Joo is also friendly with Kim Yang-su who is not enamoured by Captain Choi and his tactics due to his interference..

The film builds to a point where to keep the scenario of Lee Dong being the kidnapper Captain Choi has to assure many things stay quite and in the dark ,but Prosecutor Joo and his team discover discrepancies in the handling of the case and investigate Choi. ..

The film might not be as action packed as previous films by the action kid and the story becomes quite involved as you try to keep track of all the characters and whose working for who and who is supporting who.

Of course as the film progresses it gets more hard for both the Prosecutor and Captain Choi to cover their tracks as they try and uncover what the other is hiding. ,on top of this you have the rich business men Jang and Kim who are feeding their relative acquaintances Choi and Joo the info they need while being investigated by each party's rival team..

The Unjust has some good action scenes which entertain well enough and even some quite dry humour in places which may seem at odds with the dark and gritty story that unfolds around you..

Even though the films premise is one of school girl kidnapping and assault it seems to not concentrate wholly on that subject and like many films based on such subject matter ,it does not have that sinister criminal you love to hate ..

In turn even though both Captain Choi and Prosecutor Joo have underhand dealings with people of questionable ethics it's hard to hate one or like another because of it, thus making it hard to side with any one character .

This scenario actually leaves you thinking after viewing the film as you try and decide who actually stood for justice or not , or was it all just a show so the bosses can get promoted and achieve their goals while justice is swept under the carpet?

To find out you may have to watch the film and decide yourself..

These are the actual won awards,the film was also nominated a number of times in other categories and festivals.

Trailers
Other films in the Park Hoon-Jung series

The Showdown - 2011 - A period action films about three Joeson Soldiers.

New World -2103 - Park Hoon-Jung's crime drama which screened at the KCCUK in London with the Director in attendance. (Pictures from event also here)

For more info on the Film Nights held at the London Korean Cultural Center visit their official site by clicking the banner below.