Back to Hong Kong Classic home

Tiger on the Beat

Tiger on the Beat

This 1988 classic which stars Chow Yun Fat and Conan Lee is in my opinion is one of the top films from the former Crown Colony of the 80's . Tiger on the Beat is one of those Buddy cop movies which have become so popular over the years .

The film evolves around two police man , Francis Li (Chow Yun Fat) and Michael Tso ( Conan Lee) , they are brought together after Michael Tso chases a criminal into the eatery where Francis Li is eating.

Things get out of hand as Francis is taken hostage by the criminal and Michael uses his heavy handed Policing to take care of the situation ,resulting in the humiliation of Francis Li.

After his ordeal and a short stay in Hospital after he faints, Francis Li gets more bad luck when he is paired up with a new partner to take on a new case involving drugs. Of course his new partner is his now nemesis Michael Tso.

After their initial meeting the two must work together , Michael tries to be polite to Francis Li's abrupt attitude to wards him , but Francis is not going to comply so easily after his episode with him before.

The two will have to come together on their new case where they must track down some Drug runners , Now when a drug deal goes wrong the drug Mr Law wants to find out what went down .

They actually suspect a fellow worker played by Phillip Ko. He has taken the drugs and uses his sister to sell the drugs on . It's here where our two not so buddy Policemen get in on the act ,they know a deals going down at a local Hotel so they stake to it. ,When a young girl arrives (Mary Donna played by Nina Li Chi) Francis becomes suspicious of her ,things are confirmed even more when she returns form the bathroom holding a different bag from the one she went in with.

The two give chase with hilarious results as Mary Donna escapes in to a women’s changing room in a department store whilst our policemen pretend to be shopping for Bra's .

Mary Donna escapes after the two are accused of being Perverts , but when they show their Police ID . the store assistant (played by Lydia Shum) says what your CID perverts , they frustratingly reiterate that they are just CID.

Tracking Marydonna down to her apartment where her brother is staying they nearly get their man ,but he escapes out on to the street in his underpants , our heroes give chase across Hong Kong's shopping area. ,Michael Tso (Conan) choosing to chase him across the roof of a walkway to gain the upper hand.

But when the suspect takes a girl hostage and demands a pair of trousers but when Francis instructs Michael to give up his trousers he throws them down for them only to land in a tree ,meaning that now Francis must be Humiliated again by revealing his fancy underwear to the passing shoppers.

This is one of those films that does not let up once it gets going , at some point your going to be laughing or in awe of the crazy stunts and fighting . After Francis has berated Michael for making him a laughing stock again ,our two heroes think !, well their suspect has to contact his sister again . They spy on Mary Donna at a local Gym ,but when the drug dealers turn up to interrogate Mary Donna Michael gets into a bust up with them and comes face to face with the groups hit-man Fai ( Gordon Liu) .Whilst Michael battles for his life Francis is busy chatting up the receptionist . Francis appears and finds Mary Donna unconscious and his partner cut up and beaten in a toilet , he instructs Michael not to tell and make no reports and just say a dog scratched him.

Now things are getting a bit serious ,Francis brings Mary Donna back to his apartment where he basically interrogates her with quite shocking results . It's here that the film turns (like so many films from this era of Hong Kong) ,from being a light hearted action comedy to something more sinister where the crooks will do anything to get what they want.

So now they must protect Mary Donna and they come to a agreement with their bosses to have her get out of the country with new passports and ID .

But when they get word on a drug deal going down they intervene and in a battle which will leave you wanting more ,they arrest the head of the syndicate.

This does not sit well with the Fai the Hit Man who wants his brother back and goes about attacking our heroic Policemen and kidnapping Francis's sister .

Now the only way to free her is to trade Brother Law for Francis's sister Mimi.

With the help of the Police Inspector they break out Brother Law out of Hospital where he is recovering after the last fight.

The final battle will be fought at a local warehouse which will leave you feeling physically drained just watching the action.

As they drive through the window of the warehouse with Brother Law strapped to the bonnet of the car all hell breaks loose.

Michael must get to where Mimi id tied up and Francis with his trusty shotgun must dispatch as many foes as he can. With the clever use of a rope he manages to shoot a number of criminals (this scene is one of the iconic scenes in Hong Kong Cinema).

Next is the fight between Fai and Michael where they go head to head with Chainsaws. Now I know that for the scene to make it safer the Chainsaws had there blades ground down to make them smooth ,as in some scenes the blades had to be on for the full effect .

Many will spot at certain scenes the blades are not turning ,but for most part where the blades are slicing through stuff ,it's pretty hairy. I also know for fact that the grinding down of the blades made them more like a razor which did Not help the safety issues they had.

You may be wondering how I know this,well it was a something I asked Conan Lee about in person in Berlin in 2010.

The truth of the scene is that it was quite a hairy scene to film ,which makes it one of the stand out fight scenes in a modern day action film genre.

But there are other highlights of this film , like where Michael Tso comes up against triad bar owner Loong ( played by the magnificent Ti Lung) , this is a fun and stunning fight scene even though it is not that long.

From the outset Tiger on the Beat entertains and continues to entertain till the end , it really is one of the Iconic films of 80's Hong Kong Cinema. Chow Yun Fat is funny and maybe not as cool as his Mark Gor Character in A Better Tomorrow ,but his performance is diverse and that's not a bad thing. For Conan Lee I would have to say it showcases his many talents and bravery as a stunt man to. He gives so much here that in my opinion it is a pinnacle moment in Action for Conan .

Of course all the action was handled by Lau Kar-Leung and we all know that where he is involved that your going to see some hardcore action .

I have only one choice to award this film a top score as it truly is one of the most entertaining films you could possibly see. 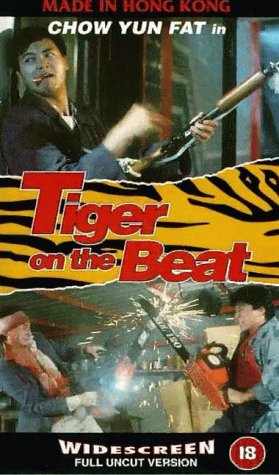 The now defunct Made in Hong VHS release cover

One side of the Joy Sales Legendary collection  new DVD release 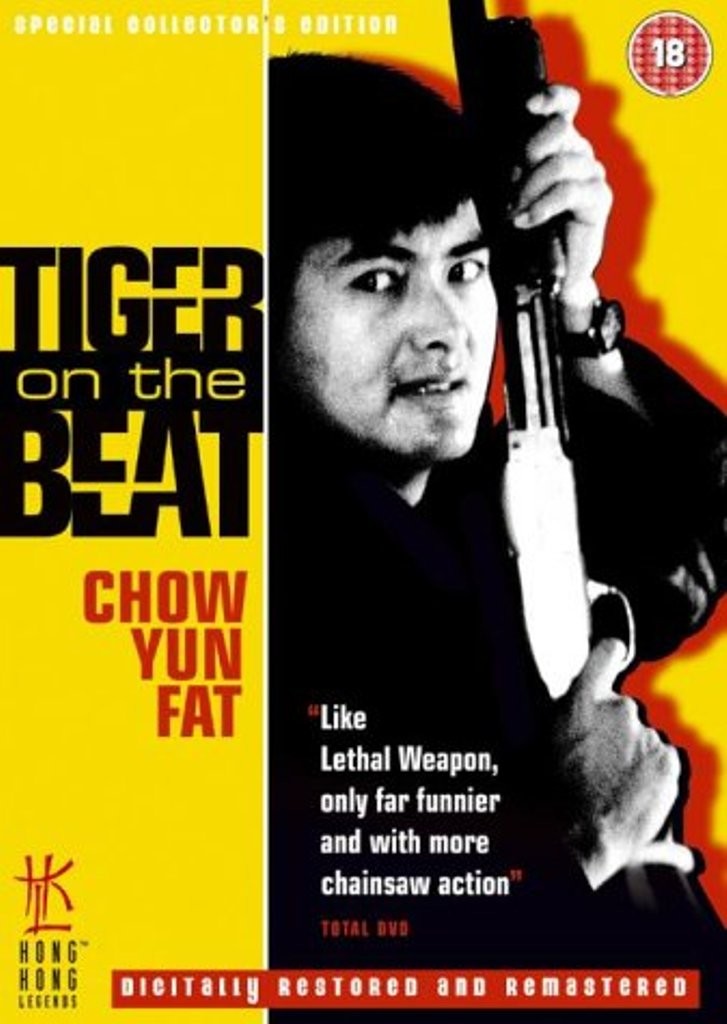 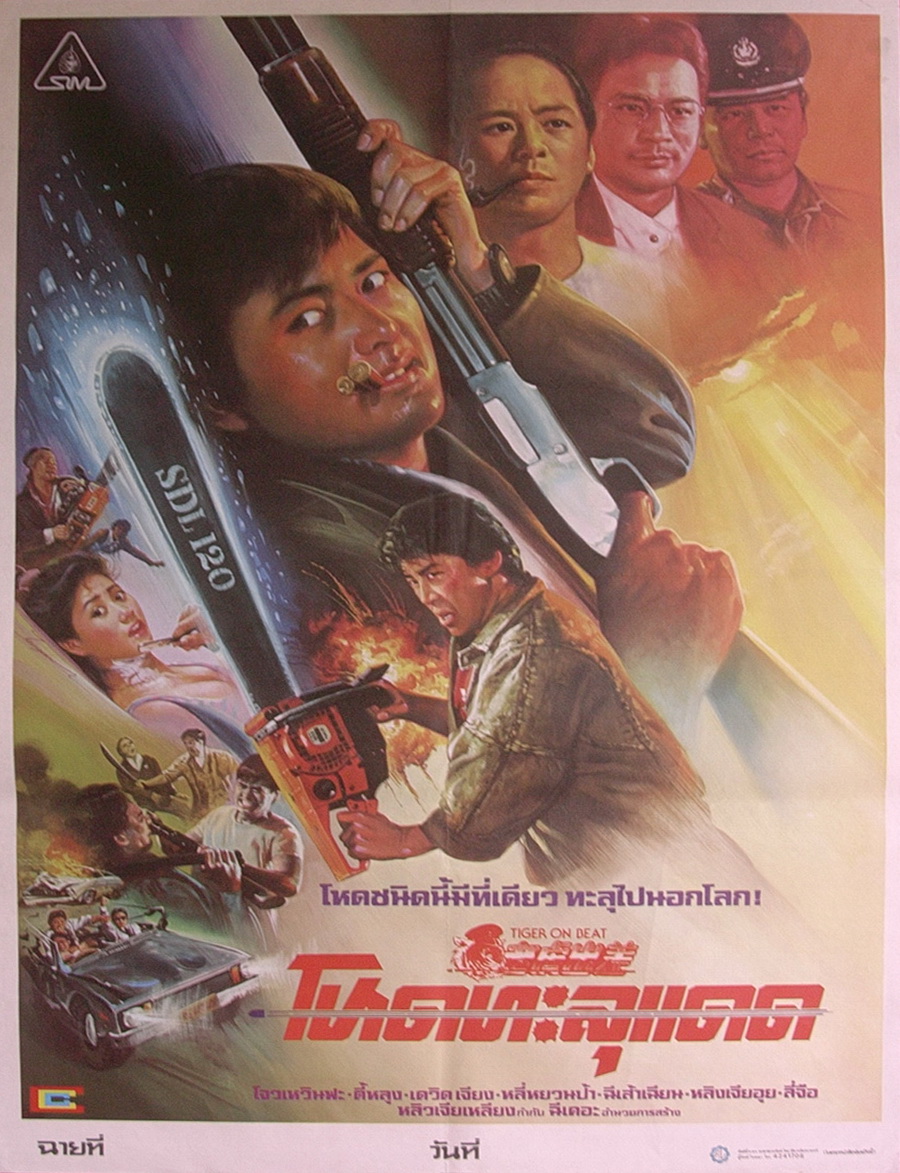