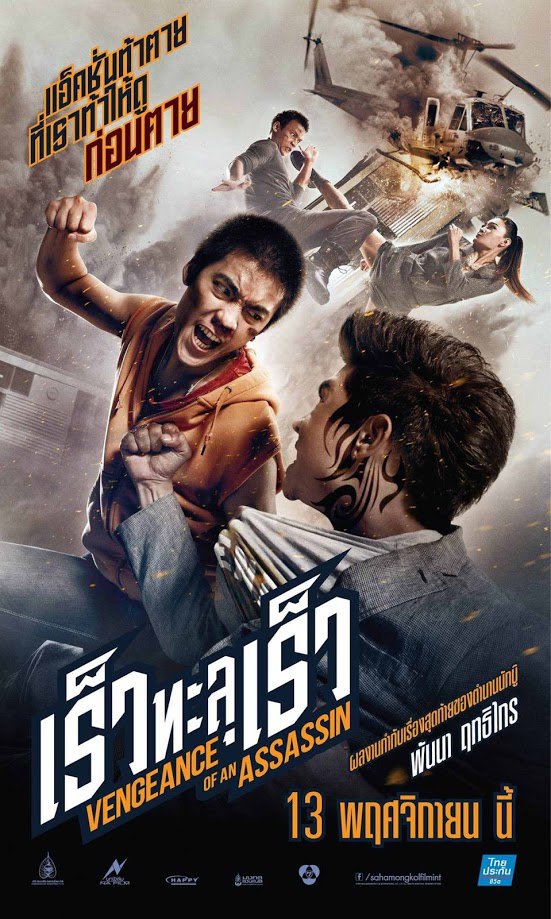 The Thailand film industry recently lost one of it's greatest talents , Panna Rittikrai who turned Thai cinema on it's head with his death defying stunts and hard hitting fight choreography passed away last July .

Panna came to fame in the eighties and Nineties as a alternative to Hong Kong's Jackie Chan , making films which featured the man performing death defying stunts, fights and more .

With his stunt group they would literally do for real which Hollywood and many other film making regions would only do with special effects.

Panna wanted to give Thai audiences their own form of high octane cinema where local fighters would feature and become heroes for the local region.

But it was when Panna Rittkrai became mentor to a young martial artist named Tony Jaa that the world would sit up and take a look at Thai action cinema.

Under Panna Rttikrai's guidance and training and the Sahamongkol group they would make film by the name of Ong Bak which would eventually launch the career of Tony Jaa and bring Panna Rittikrai to the attention of action film fans around the world.

It became apparent that any film where Panna Rittikrai was responsible for the action was a must see for fans of martial art action cinema.

Like many who first viewed Ong Bak , I myself ordering the film from the far east in it's original language and with No subtitles what so ever.

Thing was the story was pretty easy to follow and the action mesmerised all who watched.

So with great pleasure and at the same time sadness that we get here to review the film that Panna Rittikrai made before he passed away .

One thing about Vengeance of an Assassin is that Panna goes back to his roots offering a film more akin to Ong Bak then some of the later films in that series .The goal here is to showcase action which will have you reaching for the rewind button.

The story is pretty simple, Dan Chupong ( Thee / Nareet) and Nantawooti Boonrapsap ( Than /Tara) ) play two brothers who live with their uncle ..

Their uncle is keeping a secret of their parents demise. The brothers new they where killed but why and how are kept a mystery. The uncle runs a garage where the boys live with him, but a area out of bounds to the boys are kept under lock and key which the uncle has on him all the time.

Lucky enough for them the uncle likes to drown his sorrows in drink and often lay unconsciously inebriated on floor.

It is Thee who manges to gain access to the out of bounds room which holds the key to his parents death. When his uncle finds out he tells him that revenge is not the answer and that if he thinks that way he should leave.

Surprisingly to the uncle Thee does just that.

Visiting his parents grave he is approached by a man who claims to be a friend of his father. He says he knows the people behind his death and that he works for a group of people who protect others.

Thee is employed to protect the granddaughter of a Politician who is on a hit list by a man named Chai.

It all truth though Thee has been duped into taking a fall as a double cross is on the cards and the Granddaughter ( Ploy) is to be killed and Thee is to take the blame.

Panna Riitikrai went all out on this one , you would think in all honesty after Ong Bak,Tom Yum Goong,Chocolate,Bangkok Knockout and many others where does he take the action.

Well you are to be surprised , mixing it up with some heavy fire power Pann has melded the fight action with hard hitting gun action with dynamic gunplay often found in 90's Hong Kong Bloodshed cinema.

Like something out of John Woo's Hard Boiled Thee becomes a one man army as he comes under fire from a barrage of henchmen carrying Uzi's,Shotguns, and automatic weapons.

Bodies are literally being blown a part at close range as people flip and tumble across the surroundings. There are cast members on fire for real falling from heights. These stunt people on fire are being attacked while on fire.

It's one of the of the most outlandish gun play scenes I have seen since those days of the Bloodshed movies in Hong Kong.

The men after him are led by a young Woman named Joy /Nui , played by Born to Fight star Kessarin Ektawatkul who was mentored by Panna Rittikrai much like Tony Jaa and Jeeja Yanin.

Joy is a feisty mean girl who along with her partner in crime give our heroes a hard time.

It's when Ploy and Thee are cornered that we are treated to one of the most inspiring fights of the film as Thee and Joy go head to head in a blistering fight reel.

Now not forgetting Thee's younger brother 'Than /Tara ' becomes curious of his brothers departure and also gains access to the out of bounds room in his uncles abode. 'Than' actually gais access a few times where he has found some training tapes of his father teaching killing techniques with knives and guns. 'Than 'goes about training himself until he is discovered by his uncle , begging forgiveness that he won't do it again he goes about his daily life .

But when 'Thee' is injured badly and needs help he will find himself revisiting his times in the room when the past will catch up with the whole family and their only option will be to fight..

There are quite a few homages to Hong Kong 80's and 90's cinema here , the varied locations is a nice change from more recent offerings . The use of Explosives and Guns makes a exciting feast for the eyes as foes fight each other while buildings are exploding and gunplay battles are going on.

A Malaysian actor who plays a Doctor and Chinese martial arts expert has a fantastic supporting role when he helps Thee and Ploy , a fight scene ensues where the old timer delivers a bone crunching display of Kung Fu as he dispatches foes like Wong fei Hong.

Though little wire work is used it is very minimal, some CGI is used for a train roof top fight , which looks like it was inspired by Jackie Chan's Police Story 3.

But this scene is so OTT towards the end that you have to take it as a homage to some bad CGI which often featured in those 80's Hong Kong Films.

But even the OTT Train scene is not the final of this ninety minute action film.

And from what I could see the end scene was done pretty much for real where the brothers have to fight their way into Chai's domain and kill him. But not before being thrown of balcony's ,run over by cars ,not once ,not twice and not three times.

In a way Panna Rittikrai could not have made a more fitting film to sum up his career as a action film maker.

Dan Chupong gets his best role since Born to Fight. And the younger Nantawooti Boonrapsap is another one to watch in the action film stakes.

If you like hard hitting real time action then Vengeance of an Assassin is a must see. It won't win awards for acting, or the CGI or the story which is a run of the mill revenge story.

But where it excels is in the action, I just did not know where it was going to go next. The action is fast,exhilarating, Explosive, Violent, but not violent by disarming the fluidity of the fight scenes.

It may look like raw violent action ,but look closer and your see some wonderfully well timed action that makes it look like a well choreographed dance scene.

This homage to classic action is a one of the most exciting films your see this year .

Our only sadness is that this is the last feature to come from the Late Panna Rittikrai.

When you look back at all the great Thai cinema films of the last few years your find that Panna Rittikrai had a hand in many of them from director ,choreographer,trainer,writer or all of the aforementioned.

Thai cinema has lost one of it's icons and we may not see action like this coming from the region for quite a while.

Watch it Once , Watch it twice, Watch it three times and you may get to see all the action it throws at you.

Of Note : The only English subtitled version of the film available is the NTSC Region Blluray release. So your have to make sure you have a compatible Region Bluray player to view.

As of this review there is no release date available for the UK release of the film . More stills in the photo gallery

All pictures are copyright of their respective owners - © Sahamongkol Film International

Some still grabs from the Dan Chupong starrer Vengeance of an Assassin. Full review and more stills on site at www.kickemintheghoulies.com/vengeanceofanassassin.htm