Back to Movies Home 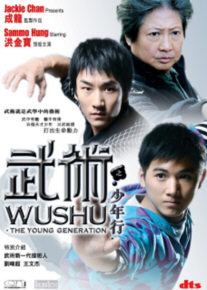 Wushu a film produced by Jackie Chan and John Sham and starring the legendary Sammo Hung Kam Bo ,You would think would be the be all and end all of Wushu films .

The thing is this film is here to showcase the talents of some fresh martial art talent in the form of it's new young stars namely Wang Wenjie and Wang Yachao who play two students of Sammo Hungs character Li Hui who also happens to to be one,the Wushu teacher at there school and two their father.This film is about patriotism as much about Wushu and how proud the sons want to make there father by winning the national championships. 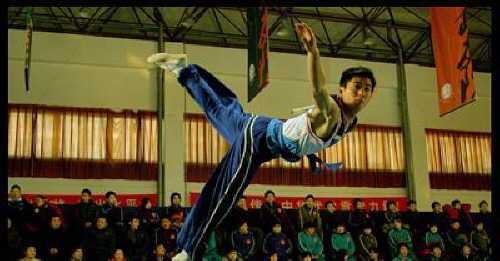 The film follows a group of children at the school as they grow up to from the team to enter the championships (as is the case in China they are enrolled at young age as it is an honor to be part of the team).Most of the film focuses around their later years as teenagers but there is a brilliant scene as you see the young boys and girls flip and roll and kick and as they do when they land they are their older selves.

Sammo plays the calm and focused teacher who is looking out for his sons and does not get to do to much during the film.But it all goes wrong when a renegade student from the past who is trafficking in children decides to kidnap two of the younger students and tricks one of the older ones to help him.Allin all it means that the team must try and save the young students at the risk of the championship .

This gives good cause for the fresh new stars to let rip some beautiful Wushu but in the end it is Sammo that gives it large and saves the day.All in all this is good viewing but done on a budget but is by no means a bad film it is a nice showcase of talent that won't offend anyone but at the same time won't have you on the edge of your seat.A good film and one i enjoyed but don't go thinking this is up to the like's of IP MAN which Sammo action directed by the way.            Score out Ten = 6.5